The recent plunge in WTI prices has led to a massive reduction in active drill rigs.

Natural gas prices have been depressed for years, largely as a result of gas associated with the high number of oil wells drilled in recent years.

Out of favor natural gas stocks are now able to hedge gas from late 2020 to 2021 at prices that result in significant levels of FCF.

The law of unintended consequences is the only real law of history. - Niall Ferguson

Considering second and third-order effects in a dynamic and volatile environment is an important tool for any investor to learn. I wrote recently on oil storage dynamics and how they are impacting short-term WTI futures markets. Using the framework that the best solution for low prices is low prices, the question then becomes: what does that solution look like?

It's clear that the U.S. domestic oil market is oversupplied. As a result, rig counts have recently plummeted as shown below: 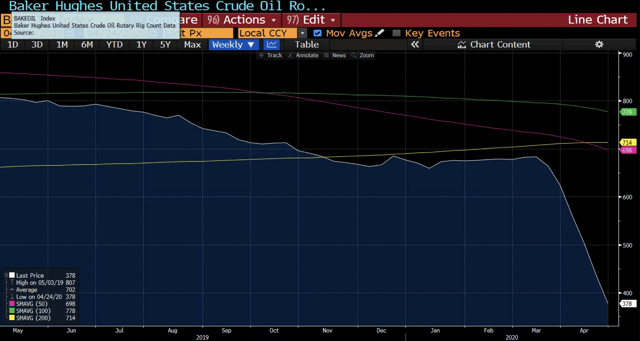 305 rigs have been parked in the past 6 weeks, an unprecedented rapidity of decline, approximating about 45% of the active rigs going offline from late March.

Associated gas is natural gas co-product that is accumulated while producing from oil wells. With the massive increase in shale drilling over the past 7 years came large volumes of associated gas. The EIA estimates that in the 5 largest shale formations, associated gas represents about 40% of natural gas production from these regions. 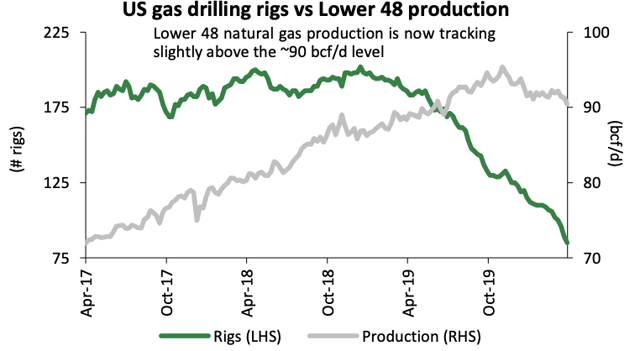 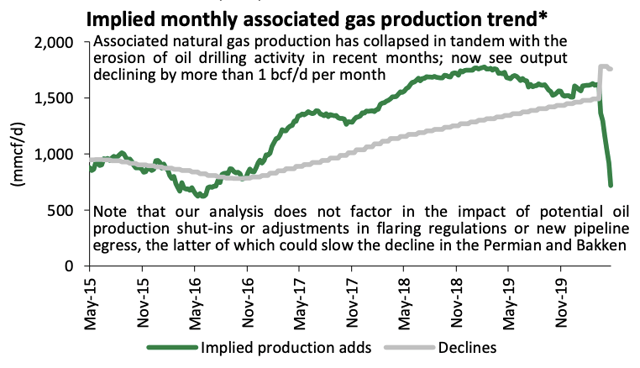 The reduction in the U.S. oil rig count is likely not over with front-month WTI at depressed levels. Each additional 60 rigs dropped from the U.S. rig count approximates to about an additional 400 m b/d in decreased oil production. With that comes further decreases in associated gas production, plus natural well declines. 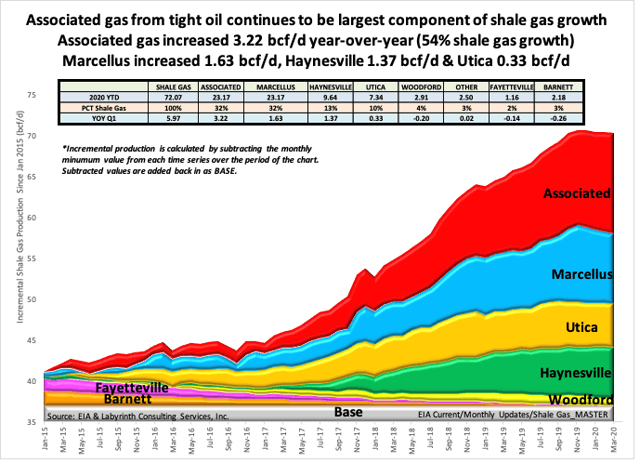 Oil production is just starting to tail off from record levels. How exactly the decline in oil production plays out is somewhat unclear. What we do know is that natural gas is poised to benefit, irrespective of how and when oil production in the U.S. is shut-in.

Based on typical rig productivity by basin and associated gas content from each basin, a decline of around 1.6 bcf/d per month in associated gas production is indicated by today's rig count. It seems fairly unlikely that rig counts will increase over the coming months, instead, they likely decrease further.

Where is the Supply and Demand Balance?

The impact on demand from COVID-19 needs to be considered. Genscape estimates that approximately 3 bcf/d in demand will be lost over the next 6 months. Around half of this is associated with decreased power demand, about 30% from industrial demand decreases, and another 20% from a reduction in LNG demand.

Natural gas markets are currently in the injection season. During the week of April 23, 43 bcf was injected into storage compared to the five-year average of 49 bcf. But recall that U.S. oil production had also not decreased materially by the 23rd. November is when gas withdrawals from storage typically start with the beginning of the heating season. Current U.S. natural gas demand sits at ~69 bcf/d, while storage sits at just above 2,100 bcf, slightly higher than the 5-year average. Below is a chart of the normal range of storage over the past 5 years: 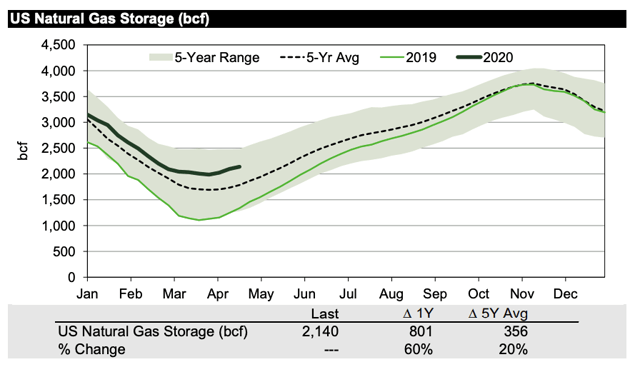 With associated gas declines based on the current rig count approximating additional decreases of 1.6 bcf/month, the 3 bcf/month decline in demand is overwhelmed in just 2 months. At this point, inventory levels should start moving toward the lower end of the 5-year range through the injection season.

This would put gas storage levels at around 2,500 bcf by December 2020, significantly lower than the 5-year average as the U.S. enters heating (withdrawal) season.

This also means that as withdrawal season continues through the winter and gas production volumes continue to decline, storage levels could approach just 500 bcf in March, a dangerously low level.

The NYMEX futures curve for natural gas has begun to reflect this dynamic. The orange line indicates current forward pricing, where the green line is forward pricing one month ago. 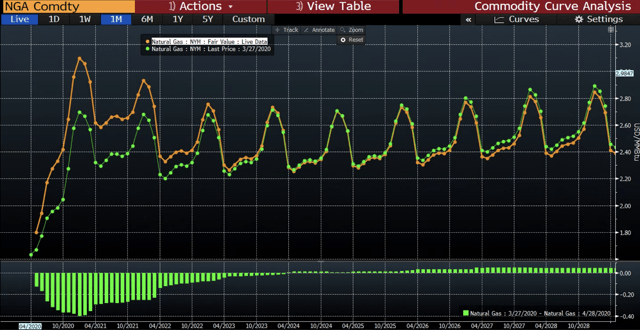 The ability for various U.S. gas producers to be able to lock in prices of over $2.60 for 2021 gas allows for low-cost producers to generate substantial amounts of FCF. The difficult last several years have led to substantial cost-cutting initiatives.

The past five years have been particularly painful for share prices of gas producers. Former powerhouses like Cabot Oil & Gas (COG), Chesapeake Energy (CHK), Range Resources (RRC), and EQT (EQT) have struggled with low gas prices since late 2014. Market capitalizations have contracted in many cases by over 90% since the stock price highs of April 2014. The industry responded by using technology to improve efficiency, deleveraging, mergers, and exploration budget austerity.

While the prospect of realizing nearly $3.00 NYMEX gas pricing in 2021 would have sounded unimpressive 5 years ago, share prices have declined to the point that the incremental cash flow to much smaller and leaner companies drives substantial FCF increases.

The U.S. will need to significantly reduce domestic oil production to prevent a protracted period of sub-$30 WTI, a level that leaves almost no producer profitable. Over the last 10 years, technology and access to capital have allowed for rapid growth in oil production as well as in associated gas volumes. Historic reductions in drilling rig counts suggest that this rationalization process is underway.

This will lead to a rebalancing of U.S. natural gas supply/demand dynamics. 2021 NYMEX pricing is already reflecting some of this effect. To rebalance the oil supply function, shut-ins will benefit gas producers. The ability of natural gas producers to hedge forward production at current 2021 levels results in substantial FCF for low-cost producers.

Follow Michael A. Gayed, CFA and get email alerts
+
Add a comment
Disagree with this article? Submit your own.
To report a factual error in this article, click here.
Your feedback matters to us!