This will be a short article.

The Gabelli Utility Trust (NYSE:GUT), a leveraged CEF investing in U.S. and international utilities, is currently trading at a whopping 84.2% premium to NAV.

It is the highest premium in GUT's entire history and by quite a margin. The fund has only traded somewhat close to these levels during a couple of days in June of 2009 and January of 2010, and the premiums didn't last long: 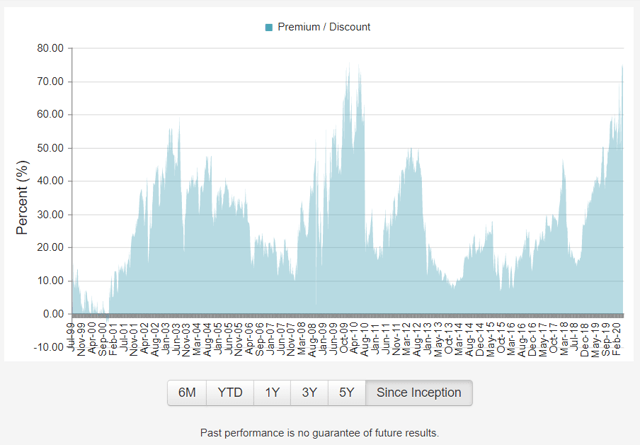 GUT's premium is also highest in the entire CEF space, and it is not even remotely close. Consider the 10 CEFs with the highest premiums:

As can be seen above, GUT's premium is more than three times as large as that of its closest peer, the DNP Select Income Fund (DNP), and no other fund has a premium greater than even 30%. GUT is really on a class of its own.

Excessive premiums are detrimental to shareholders for three key reasons.

First is the fact that excessive premiums can cause significant underperformance and shareholder losses when these narrow. As a quick example, GUT's shareholders suffered losses in excess of 20% during 2010, as the fund entered the year with a +70% premium to NAV. Losses were exclusively due to narrowing premiums, as NAV returns were outstanding at 18.19%:

In my opinion, GUT's shareholders are going to experience double-digit losses when, not if, premiums narrow to more reasonable levels. Management seems to agree:

Second is the fact that excessive premiums significantly lower a fund's distribution rate, directly reducing shareholder returns. If the fund were trading at its NAV per share price of $3.68, shareholders would be entitled to a 16.3% distribution yield, an extremely enticing yield, and almost twice as large as the fund's current distribution. Investors might consider initiating a position in GUT once the fund's premium narrows, to receive a comparatively stronger yield.

Third is the fact that excessive premiums combined with return-of-capital distributions, like those of GUT, necessarily lead to shareholder losses. The logic of this is surprisingly simple. Imagine if the fund were to completely self-liquidate tomorrow. Investors would receive $3.68 per share, equivalent to the fund's NAV per share, which is about 45.7% lower than the fund's current share price of $6.78. Shareholders would, in effect, suffer losses of 45.7% if the fund were to completely self-liquidate.

Now, the above is obviously not going to happen, but GUT does sell some of its assets to fund its monthly distribution, which should have a similar, but smaller, effect. GUT's distribution is almost entirely return of capital; hopefully no investor thinks utilities could possibly yield 16.3%, with a distribution coverage ratio of only 19.0%, as per the fund's latest annual report: 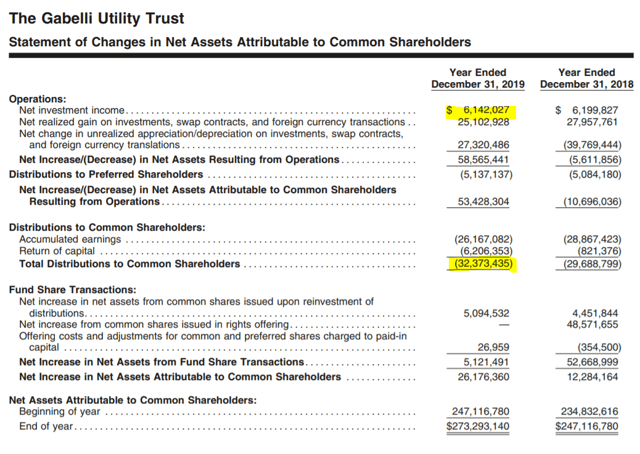 Considering the figures above, it seems that GUT is forced to sell about 9-10% of its assets every year to fund its distribution. This is obviously unsustainable and should lead to shareholder losses due to the aforementioned reasons.

As a final point, I believe that investors should be willing to pay hefty premiums for high-quality funds with market-beating performance. PIMCO fixed-income CEFs come to mind. GUT is definitely not such a fund, as it has underperformed its index on a NAV basis for the past decade or so:

Performance is rapidly worsening, with the fund posting double-digit losses for the past year, far in excess of its index:

GUT's shareholders have been spared the worst due to the fund's skyrocketing premium:

GUT did perform exceedingly well during the 2000s, but I'm not sure that investors should put too much weight on performance from 10 to 20 years ago:

GUT's excessively high premium to NAV will almost certainly lead to significant shareholder losses in the coming months. Shareholders should strongly consider selling their shares now, both to avoid future losses and to lock in present gains.

Thanks for reading! If you liked this article, please scroll up and click "Follow" next to my name to receive future updates.