Over the last few weeks, we have discussed the details of leverage changes of various PIMCO CEFs across a number of articles. The reason for our focus on changes in leverage and borrowings has to do with the outsized impact these fund characteristics have on fund earnings, distribution sustainability and NAV performance. In this article, we turn our attention to the largest CEF group - Nuveen - and in particular the changes in borrowings and leverage across the month of April.

We track leverage details of 43 Nuveen CEFs on the service. Let's take a look at what happened in April. The chart below shows both the change in leverage and the change in borrowings, floored at -30% to make it readable. 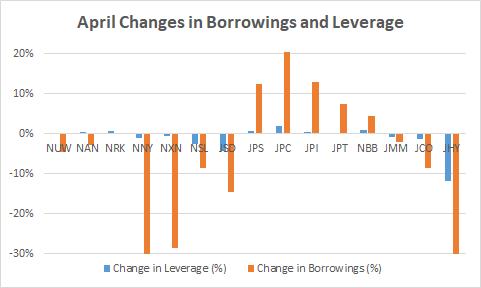 This is also summarized in the table below.

The pair of New York muni funds look like they had large cuts in borrowings.

The leverage of these funds was very low to begin with at 1% and 3% so these large relative changes are a nothingburger.

The High Income 2020 Target Term Fund (JHY) cut its borrowing by 100% from 12% to zero. This is not a surprise given it is a target term fund. The portfolio consists of high-yield bonds maturing in 2020 or early 2021. The overall return of the fund net of price moves of the remaining bonds into its termination will consist of 1) discount accretion from 1.7% to zero, 2) carry of about 1.6% - lower than the current portfolio coupon due to upcoming maturities and resulting cash drag, 3) pull-to-par of roughly zero (95.12% weighted-average price as of March-end should now be close to par judging by the S&P High-Yield Index), 4) any bid/offer on unwinding the outstanding bonds, and 5) any defaults - a figure of 3-5% looks reasonable. Summing everything up gets us to about zero so the fund does not look like an attractive proposition in our view.

The Short Duration Credit Opportunities Fund (JSD) cut about 15% of its borrowings and lowered its leverage from 39% to 35%. At 39% the leverage was already elevated for a credit fund so the cut is not overly surprising.

Finally, let's have a look at the four preferreds funds:

Altogether these funds added $194m of additional borrowings in April or 15% of their March levels. The actual changes in leverage varied from basically zero for JPT to 2% for JPC. It might seem surprising that such a big gain in borrowings resulted in such a small change in leverage; however, had the funds not added additional borrowings, their leverage would have fallen 1-3% over the month due to a strong rally in the underlying assets.

As we discussed in our previous articles, these four preferreds funds all cut borrowings in March as a result of the sharp drop in the markets and their 38% leverage caps. Let's see how the increases in April compare to their March and pre-drawdown levels. Despite the increase in April current borrowings are still much lower than their pre-drawdown levels. For example, JPS borrowings are still nearly 30% below their January figures with JPS retracing only a quarter of the March cut. 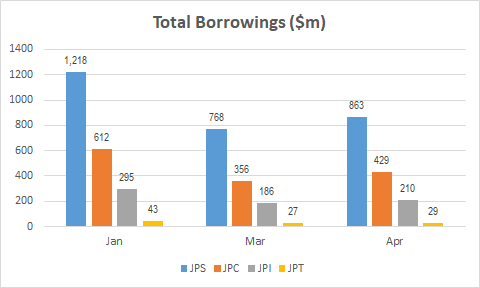 Investors familiar with JPS may recall that we saw a similar picture coming out of the financial crisis where JPS cut leverage and was relatively slow to build it back up again as the market recovered. 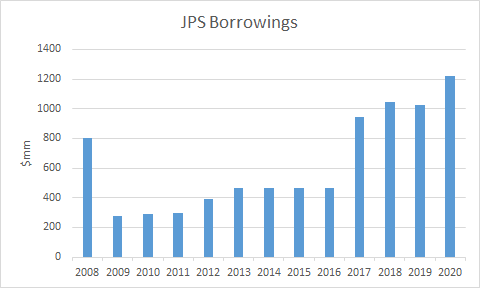 This was likely one of the reasons why JPS lagged other preferreds CEFs funds by 0.6% per annum over the last 10 years but only by 0.2% per annum over the last five years in NAV terms. In the case of the current crisis, JPS suffered a lower drawdown but was slower to regain NAV against other funds like the Flaherty and Crumrine Total Return Fund (FLC) - a likely outcome of its deleveraging in March. 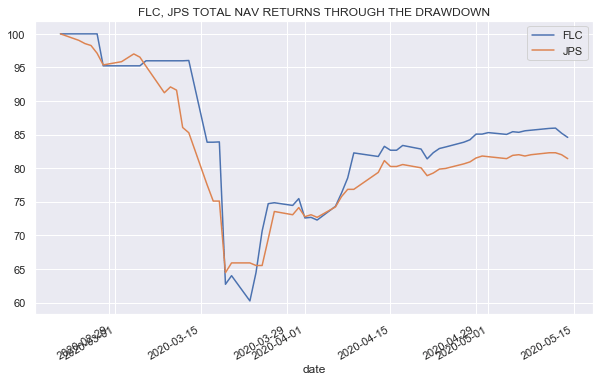 The two perpetual CEFs JPS and JPC share the highest leverage in the group at 33.5%. This gives them room of about an 11% NAV drop when they would begin to hit the 38% cap. That doesn't seem like sufficient room in this market, particularly given the sharp rally we have seen in the last few weeks.

For this reason, we would tilt to the Preferred & Income Term Fund with a term date in 2024 which looks like a slightly safer choice at a leverage of 30.7%. Its discount of 5.6% which is at the fund's 25th percentile over the last five years should provide a tailwind of 1.3% per annum into its termination. Alternatively, an even safer choice would be the Preferred and Income 2022 Term Fund at just 17% leverage.

JPT remains on our Focus List where we remain positioned fairly defensively given the large run-up we have seen across assets.

For investors who have a bullish view on the market and want to maximize their upside may find the Flaherty and Crumrine Total Return Fund attractive which boasts a 36.2% leverage and no leverage cap.

Changes in CEF borrowings continue to drive NAVs and income generation as we come out of the drawdown. Nuveen preferreds funds have lost some ground on both fronts due to their having to cut leverage in the middle of the drawdown. Although the two Nuveen perpetual funds JPS and JPC are trading at the widest discounts in the sector and look attractive as a tactical play, they remain relatively close to their leverage caps making them difficult to justify as buy-and-hold investments at this stage. For this reason we would tilt to either the term funds JPI or JPT which boast lower leverage and attractive pull-to-NAV discount tailwinds or the perpetual fund FLC.

Check out Systematic Income and explore the best of the fund, preferred and baby bond markets with our powerful interactive investor tools.

Identify the most attractive CEFs and track the entire market with our evidence-based bespoke metrics. Pick up the best preferred stocks and baby bonds that fit your criteria.

Get investment ideas and sector views from our Strategic Allocation Framework and Income Focus List.

Enjoy our max offer of a 20% limited-time discount for the remainder of the week.

Disclosure: I am/we are long JPI, JPT, FLC. I wrote this article myself, and it expresses my own opinions. I am not receiving compensation for it (other than from Seeking Alpha). I have no business relationship with any company whose stock is mentioned in this article.