The U.S. Energy Information Administration has recently released their natural gas monthly statistics for February 2020. In this article, we will briefly review their consumption and exports figures, then look at our estimates for February and March, and conclude with our latest forecast for May, June, and July.

Strong growth in exports and an increase in national consumption ensured that the growth in total demand stayed positive. In fact, on an annualized basis, aggregate demand has not posted a single negative growth figure since January 2010. 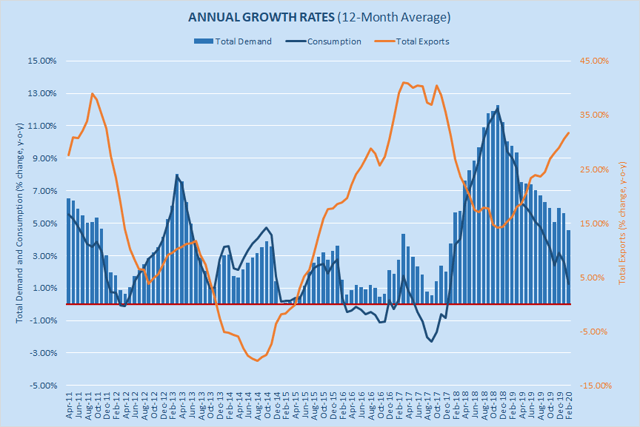 Total demand continues to grow faster than consumption, a trend that has been in place since May 2015. It points to the rising weight of exports within the overall demand structure. In the chart above, you can clearly see that growth rates in consumption and exports often diverge. Despite occasionally weak consumption, total demand is still growing in annual terms due to the very strong exports rate. Previously, however, total demand growth was almost entirely driven by national consumption.

Last February, combined pipeline and LNG exports (from contiguous United States) totaled 452.2 bcf or 15.59 bcf per day. The volume of total exports is now equivalent to 14.90% of national natural gas consumption on a monthly basis. On a 12-month average basis, exports now equate to around 13.72% of total demand - a new all-time record (see the chart below). Exports' share in the aggregate demand structure has almost doubled over the past three years. 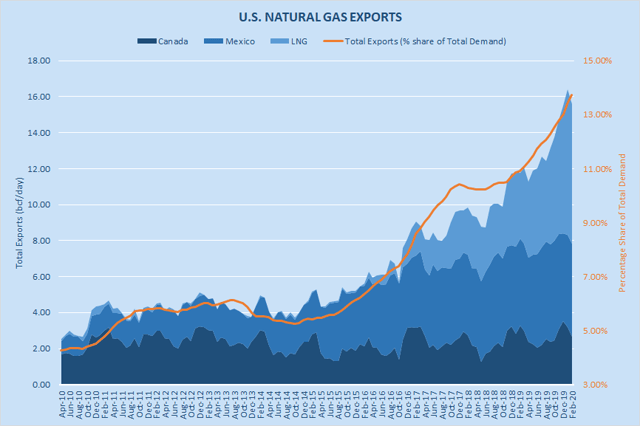 Exports remain the fastest-growing source of demand for American natural gas. While total demand (12-month average) increased by 26.50% over the past five years (from February 2015 to February 2020), exports have more than tripled over the same period. In fact, exports have already surpassed the "other" category in the overall demand mix and are now more significant in weight than either U.S. commercial or residential users (on a 12-month average basis) - see the chart below. 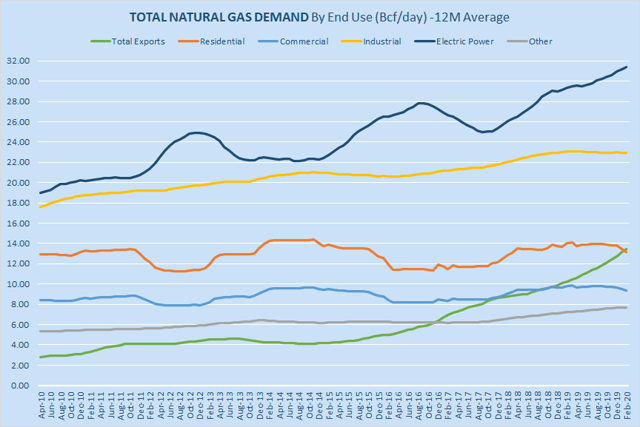 Other fast-growing sources of demand include Electric Power/powerburn (+38.30% since February 2015) and industrial consumption (+9.40%). Notice that, over the past five years, residential and commercial consumption has remained virtually unchanged. 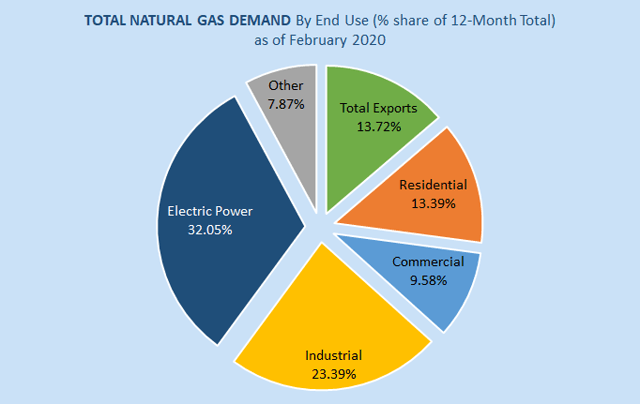 Currently, we expect natural gas consumption in the U.S. to increase slightly (in annual terms) over the next three months. However, frequent changes in the short-range weather models will obviously generate some volatility. Furthermore, it is important to remember that the impact of COVID-19 on natural gas demand will be heavily influenced by the scale and duration of the lockdown. Under the latest weather forecasts, we project that total U.S. natural gas consumption will grow by only 1.10% y-o-y (on average) over the next three months (May to July).

However, the rate will vary significantly for each month. At this moment in time, our consumption forecasting models generate the following results:

Please note that there is a large degree of uncertainty to that forecast, as weather models can generate sporadic changes in the number of cooling- and heating-degree-days (CDDs and HDDs). It is also important to remember that changes in HDDs have 3x stronger effect on natural gas consumption than changes in CDDs. That is why all our forecasting models are updated on a daily basis. 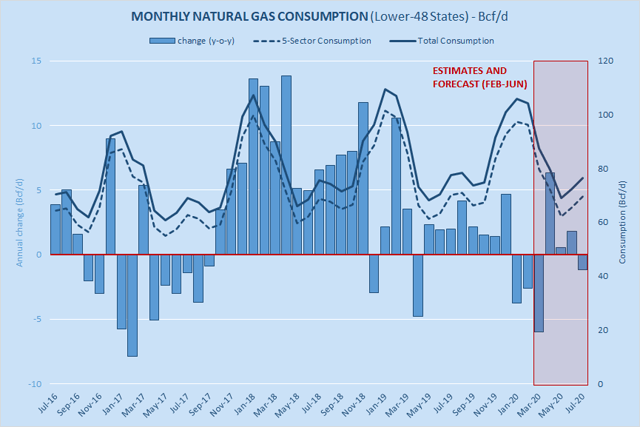 Exports growth should slow. We currently expect total exports to average 12.08 bcf/d in the May to July period (-0.78% y-o-y). However, please note that our LNG exports' estimates are based on the vessels' tracking system, not on the liquefaction flows. We expect net exports of natural gas to drop to 5.57 bcf/d by August 2020.

What about the supply? After all, it is not the demand which is driving the price, but the interaction between demand and supply.

In general, natural gas production is projected to decline for two key reasons: 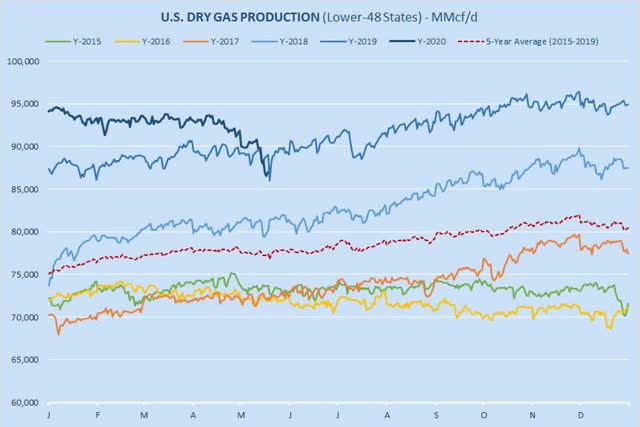 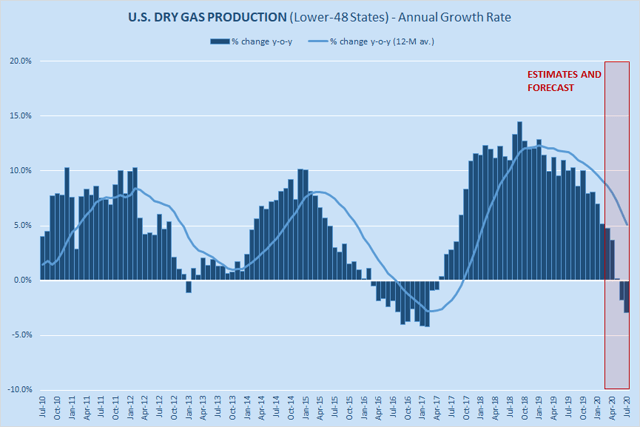 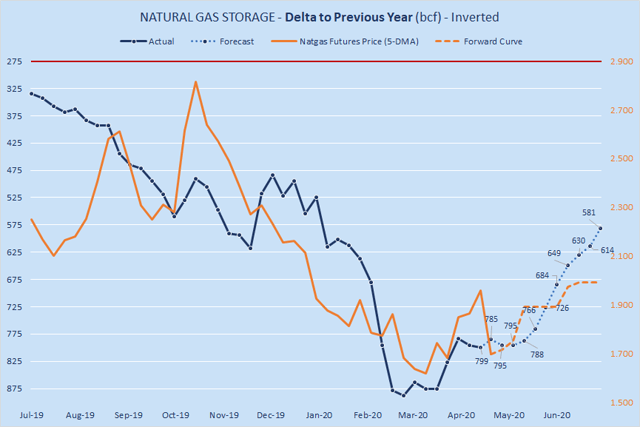 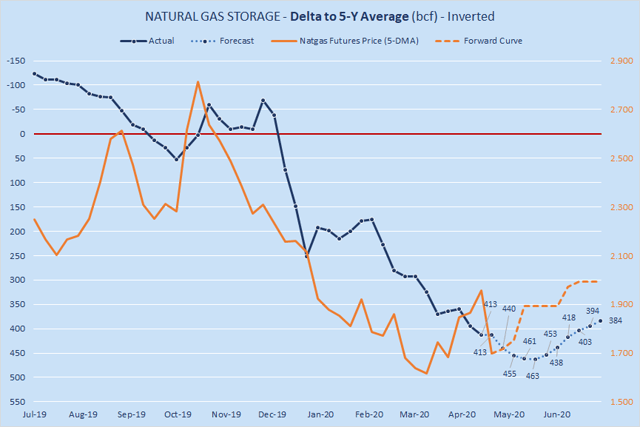 Bluegold Trader
5.09K Followers
Author of Energy & Currencies Trader
High quality, up to date analytics (natural gas, crude oil and forex)
Bluegold Trader (BGT) is an independent provider of public market information and trading analytics. BGT is a one-stop shop for all your research needs in energy and forex trading.