Housing, as I have written many times, is a long leading indicator, giving a glimpse of the direction of the economy one year and more out. As such, the April report on housing permits and starts, released yesterday morning, sets the baseline both for the impact of the coronavirus recession and for a potential recovery.

Both housing permits and starts peaked in January. Starts have historically tended to be about twice as volatile as permits and that has remained true for March and April, as the former is down the total of a little over 30% (red in the graph below), while the latter is down 45% (blue):

Historically, single-family permits have been the least volatile of either series and just as leading. These peaked in February and are down 32.7% through April:

The first question going forward is, should we expect an even further collapse or is this close to or at the bottom?

Lower mortgage rates stimulate demand by making housing more affordable for potential buyers. The below graph shows this by comparing mortgage rates (red) for the past 60 years with a measure of affordability (blue), namely the FHFA monthly house price index x those mortgage rates. This does not exactly show, but approximates, the monthly payment for a typical home buyer:

Since I have many times pointed out that mortgage rates lead permits and starts typically by 3 to 6 months, the below graph, which updates mortgage rates through one week ago (red, right scale, weekly in the graph below), during which week they made a daily all-time low of 3.09%, indicates that average monthly payments will probably decline further for buyers who bought in April:

As we have seen in the first two weeks of May, mortgage applications rose sharply, reclaiming nearly half of their decline from their peak just a few months ago (courtesy Yardeni.com): 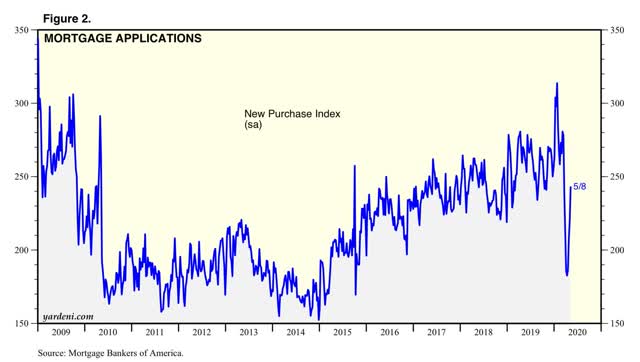 So, lower mortgage rates are already beginning to have an impact on the market. While perhaps 20% of the labor force has been laid off since March, there are enough of the remaining 80% who feel secure in their employment that these lower rates have enticed them to grab (relative) bargains.

Obviously, the continued course of the pandemic will have a determinative effect on these numbers, but what mortgage rates and the April report on permits and starts suggest is that (1) barring a renewed major wave of infections (which is possible!), we are probably at least close to the bottom of this major leading component of the economy and (2) when the pandemic is finally brought under control, at least if it is this year sometime, housing will continue to a significant positive bounce at the outset of the recovery.

New Deal Democrat
3.4K Followers
New Deal democrat As a professional who started an individual investor for almost 30 yeas ago, I quickly focused on economic cycles and the order in which they typically proceed. I have been writing about the economy for nearly 15 of those years, developing several alternate systems that include mid-cycle, long leading, short leading, coincident, lagging and long lagging indicators. I also focus particularly on their effects on average working and middle class Americans.
Follow