At long last, Overstock (NASDAQ:OSTK) finally distributed its digital dividend on May 20th. The digital dividend is technically a share of Digital Voting Series A-1 Preferred Stock (OTCPK:OSTKO), which has the same rights as the company's common stock, including voting rights. The OSTKO preferred stock is expected to pay a small dividend, in contrast to the common stock that does not pay a dividend. The key feature of the digital preferred stock, however, is that it is intended to trade only on an exchange operated by Overstock's tZERO subsidiary. The whole idea is to use the dividend as a way to drive new accounts and trading volume at tZERO and help get that exchange off the ground.

A little background may be helpful in understanding the current dynamics. The company originally announced the digital dividend in July 2019 but was forced to withdraw the idea due to issues with the SEC. There was also quite a bit of discussion at the time around whether and how shorts could deliver the digital preferred stock owed on borrowed shares of OSTK since the digital preferred stock couldn't be acquired through traditional brokers. That caused a fairly large short squeeze in July and August 2019 - some speculated that then-CEO Patrick Byrne orchestrated the whole thing for the primary purpose of making life hard for the shorts - but the issue was put to rest when the Options Clearing Corporation announced that shorts would merely deliver the cash equivalent value of the digital dividend.

So, the company started over and doubled down on the digital dividend. It registered the dividend on a Form S-3 so that it would be freely tradable from day one and not have a six-month holding period. Management stated that they would be in contact with the SEC and other regulators to ensure that the digital dividend was accepted by the regulators.

Management kept intact the transfer restrictions that stated that all sales of the digital preferred stock must be made through the tZERO exchange. Here is their disclosure from the prospectus supplement:

The press release doesn't specifically mention that there is currently only one broker-dealer, Dinosaur Financial Group that subscribes to the tZERO ATS and is opening accounts. Dinosaur, a fairly small and not well-known broker-dealer, happens to be run by the father of a tZERO executive, which is perhaps not directly relevant to the article but is not unusual for Overstock companies.

Except nobody wants to do any of that. People would much rather just sell the OSTKO shares from within Ameritrade or Robinhood or wherever they hold their Overstock stock. And that is in fact what has happened. Below shows that OSTKO trading volume over-the-counter was over 51,000 on May 20th. 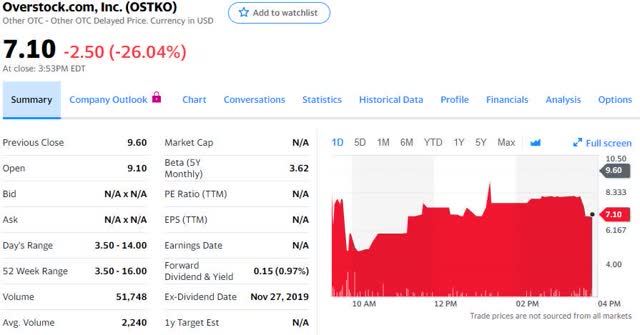 Overstock reportedly sent a letter to various brokers alerting them that OSTKO trades according to the terms of the preferred shares may only be traded on the tZERO ATS and that the brokers may not facilitate trading on other exchanges. This raises many interesting issues around whether companies can dictate where shares may be traded. I'd encourage those interested to read this Bloomberg article that provides some interesting quotes from market makers and academics. It may be that the SEC or FINRA will need to weigh in on the matter. It is my understanding that as of this writing, some brokers are not allowing account holders to sell their OSTKO shares while other brokers are executing those trades on the over-the-counter markets.

In the meantime, investors are voting with their actions. First, trading volumes on the over-the-counter markets are much higher than volumes traded on tZERO through Dinosaur. It is simply easier and cheaper to trade over-the-counter versus having to set up a Dinosaur account, try to transfer shares and then pay a 1% trading fee. Unless Overstock is successful in stopping brokers from trading OSTKO over-the-counter, few will likely open Dinosaur accounts.

Second, the OSTKO shares closed trading on May 20th at $7.10 on the over-the-counter market compared to OSTK shares closing at $18.54. OSTKO shares should, theoretically, trade at a higher price than OSTK shares because they have all of the same rights as OSTK shares with additional rights to dividends that are not paid on OSTK shares. Yet, despite being a worse security, OSTK trades for more than twice the value of OSTKO. Perhaps this arbitrage will be reduced or perhaps the point is that shareholders value their time and money and are factoring in those costs to the OSTKO price. 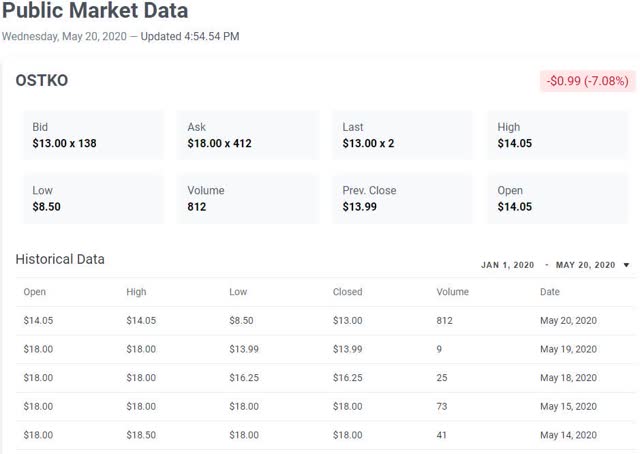 IRA Accounts and The Blockchain

A couple of other points that I think are important. First, as discussed earlier, if one holds OSTKO shares in an IRA and their IRA broker adheres to Overstock's transfer restrictions and does not allow the account holder to sell OSTKO over-the-counter, the holder's only way to sell OSTKO is to open an account at Dinosaur and transfer the OSTKO shares there. That transfer would be considered an early withdrawal from an IRA and require the holder to pay early withdrawal penalties and taxes. I hope there are not many people in this unfortunate situation.

Second, Overstock's transfer agent, Computershare, keeps the book entry record of ownership of the OSTKO "digital" securities. tZERO makes available a "copy" of the Computershare's book entry record that is viewable on the blockchain to "enhance the trading experience" (see discussion in 10-K). In effect, none of the actual mechanics of the trade involve a blockchain. It is all done via Computershare like the company's common stock.

Overstock's digital dividend will likely not be a game changer in any sense for the company or tZERO. Investors are currently selling OSTKO shares at less than one-half the price of the objectively less valuable common stock so that they do not have to go to the trouble of opening a Dinosaur account, paying higher fees, and transferring securities. If Overstock's own investors do not want to use tZERO, it is unlikely, in my opinion, that the exchange will catch on in the wider public.

The Stock Stooge
1.2K Followers
None.

Disclosure: I am/we are short OSTK. I wrote this article myself, and it expresses my own opinions. I am not receiving compensation for it (other than from Seeking Alpha). I have no business relationship with any company whose stock is mentioned in this article.