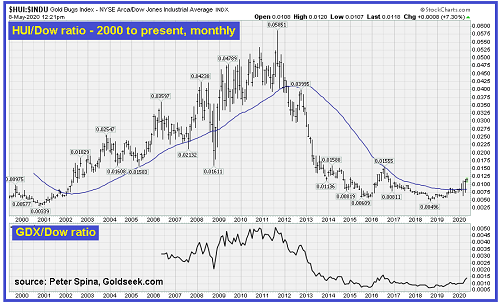 The chart above speaks for itself. You could not find a more bullish chart set-up in the stock market. Note that the HUI/Dow ration bottomed out in late 2019 at the same level where it bottomed in late 2000. Most investors in this sector were not around for the beginning of the precious metals bull market in late 2000. But you can see the big move that started in 2008 - for which many of you were around - actually began 8 years early at a much lower level. I believe there's a good possibility, because of the amount of money that has been printed by Central Banks globally, but especially by the Fed, that the scale of the next bull move in this sector will be larger than the 2000-2011 move.

The precious metals sector continues to be glaringly ignored by the mainstream financial media and most "alternative" forms of media. This is a "loud" indicator that the fattest part of the bull move is yet to come. YTD gold is up 15.4%, GDX is up 25% while the SPX is down 6.5%. If the SPX were up 25% YTD, they'd be doing naked cartwheels on CNBC.

M&A activity kicked up again in the mining stocks over the past two weeks. But the deal that caught my attention was the acquisition of TMAC Resources (OTC:TMMFF) by China's Shandong Gold Mining Co. for C$207.4 million. TMAC operates the Doris gold mine in Hope Bay. Shandong is 47% owned by the Chinese Government.

China has been aggressively buying gold mines in Africa and South America. It was just a matter of time before it turned its sights on North American mining companies. I will be interested to see if Chinese mining companies ramp up their M&A activities in Canada, Mexico and the U.S. Most of these junior mining companies that have highly prospective projects, transitioning into production or currently produce, especially the smaller ones, are extraordinarily cheap relative to the price of gold/silver and especially relative to where gold/silver are going. It's also another way for China to convert US dollars into gold.

A new subscriber wanted to know if he should start buying mining stocks now or wait a few weeks for a possible pullback. Here's my response: "Regarding market timing, it's impossible to time peaks, valleys, ebbs and flows. The key is to find ideas you like and start building positions. Always always always leave plenty of cash to take advantage of sell-offs, pullbacks, corrections. And it's usually a good idea to sell part of your position if/when the stock runs up sharply in a short period."

If you are not invested in the sector yet, start wading in with maybe 10-15% of what you plan to allocate to mining stocks. Yes they've had a big run-up since mid-March but they could work off the "overbought" technical condition by going sideways for a bit and then head higher again. A lot of cash is starting to flow into the sector and you don't want to be left standing at the station when the train pulls away. It's not a good feeling chasing stocks which I had hoped would pull back - been there, done that.

The above commentary is from the latest issue of the Mining Stock Journal. I focus on lesser followed “venture capital” junior exploration companies but include ideas for my favorite large cap stocks, along with options ideas for those. Several of my junior mining stock picks have doubled or tripled since mid-March.

Dave Kranzler
3.94K Followers
I spent many years working in various analytic jobs and trading on Wall Street. For nine of those years, I traded junk bonds for a large bank. I have an MBA from the University of Chicago, with a concentration in accounting and finance. Currently I co-manage a precious metals and mining stock investment fund in Denver. My goal is to help people understand and analyze what is really going on in our financial system and economy.