Novo Nordisk delivered very positive results in the face of the pandemic, which was somewhat expected.

The company did benefit from stockpiling of its products and currency fluctuations, but the overall growth was still strong.

Obesity rates continue to climb, which will likely prove promising for it going forward.

The company has a few promising products in its pipeline, which could help to drive forward growth.

This company could be worth considering as a healthcare play.

On Thursday, May 7, 2020, diabetes-focused pharmaceutical giant Novo Nordisk A/S (NYSE:NVO) announced its first-quarter 2020 earnings results. At first glance, these results appeared rather decent as the company posted considerable year-over-year revenue growth and showed a reasonable profit. Admittedly, this is not really the type of company that would expect to be impacted much by a pandemic as people that require its products are still going to require them no matter what else is going on in the world. A closer look at the company's results does indeed reveal that there was a lot to like here and in fact the company benefited somewhat from the pandemic. It also continues to make progress in a few key growth areas of its business, which is something that we very much like to see.

It seems essentially certain that the first thing anyone reviewing these results is likely to notice is that every measure of financial performance improved compared to the prior-year quarter. This is something that many other companies have failed to show in the current environment, partly due to the shutdowns that many nations have been imposing to combat the spread of the novel coronavirus. One of the reasons for this year-over-year growth was currency fluctuations. In short, the Danish krone, which Novo Nordisk reports its results in, fell against numerous other currencies over the past year. However, the overwhelming majority of the company's customers are located outside of Denmark and so pay for the company's products using their own respective currencies. When these currencies increase in value against the Danish one, then they convert into greater amounts of kroner when the company calculates its financial results for reporting purposes. With that said though, Novo Nordisk still reported 14% year-over-year sales growth even when we calculate its results using the currencies that its customers actually paid with.

One of the things that several regions around the world did in order to prepare for the COVID-19 pandemic is to increase their stockpiles of medicines and other important products just in case of interruptions to the supply chain. Novo Nordisk benefited from this during the quarter as its products were some of the ones that were stockpiled. This naturally resulted in the company reporting stronger sales growth than it otherwise would have had. It is admittedly somewhat difficult to determine what the exact impact of this was, but the company estimates that about 7% of its sales growth was caused by this stockpiling. Thus, if we exclude this, then the company would have shown about 7% sales growth year-over-year when measured in constant currency, which is still quite respectable, but nowhere near as much as the headline numbers suggest.

In my last article on Novo Nordisk, I discussed how the introduction of the company's new oral semaglutide Rybelsus medication could be a driver of growth for the company. This has indeed proven to be the case as the product has already grabbed an 8.8% share of the GLP-1 analogue market in the United States: 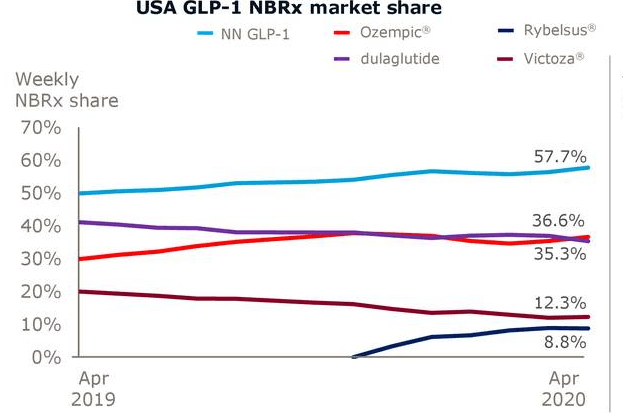 This may partly be due to the overall convenience of it. Unlike other GLP-1 analogues on the market that are taken subcutaneously, Rybelsus is simply ingested. Thus, patients may prefer it to older medications due to the ease of taking it and have started asking their doctors about it. This is a trend that we could very easily see continue in the United States as well as abroad as Novo Nordisk introduces it.

In a previous article, I introduced readers to Saxenda, a reformulation of Novo Nordisk's liraglutide GLP-1 analogue Victoza, that the company has begun marketing as a product to help chronically obese people with at least one other weight-related problem to manage their condition. I also suggested that this could also prove to be a driver of growth for the company. This has also proven to be the case as shown here: 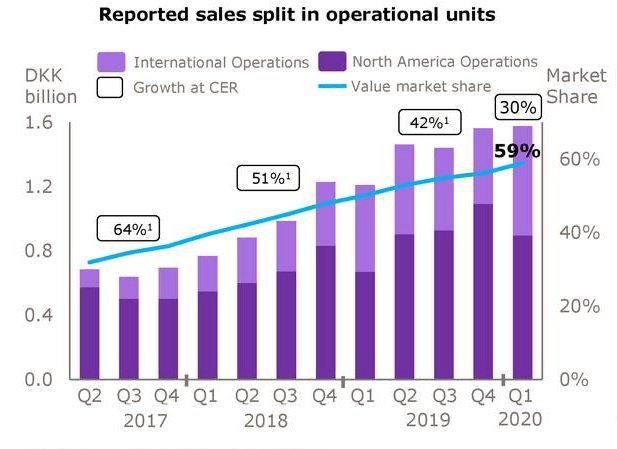 This sales growth was driven by rising demand in both North America and the rest of the world. It seems likely that at least part of this is regulators allowing the company to introduce the product in their countries, which has been a staggered process since Novo Nordisk first developed the product. Saxenda has now been launched in 46 different countries around the world and the company is working to expand this number. It seems likely that the product will continue to see sales growth as the company works at this.

We can in fact see this playing out simply by looking at the company's results. As already mentioned, Novo Nordisk saw approximately 77% year-over-year sales growth after adjusting for the impacts of currency fluctuations and the COVID-19 stockpiling. The overwhelming majority of Novo Nordisk's sales come from its diabetes-care products: 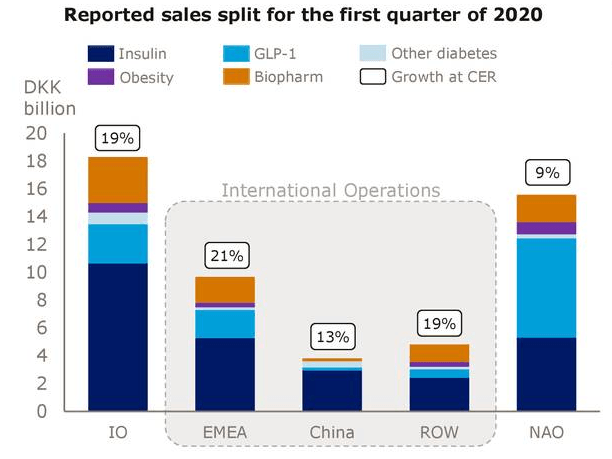 Thus we can assume that the majority of the company's sales growth came from these products. This was the case, although insulin sales in North America actually went down. Presumably, this is from diabetic patients converting from insulins to other treatment regimes: 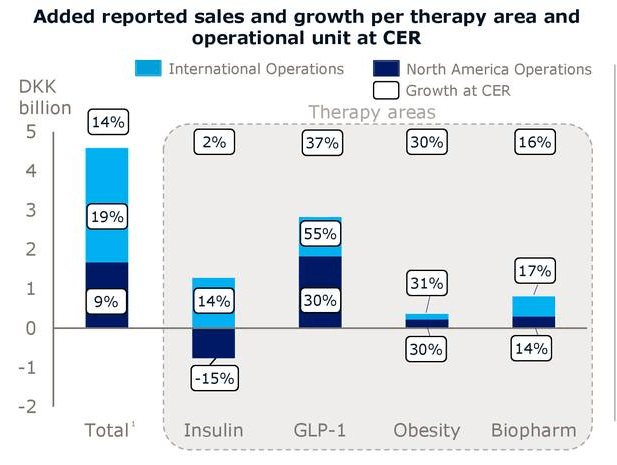 With that said though, we can clearly see that every one of the company's product lines delivered year-over-year growth. This is a good thing as it shows us that there is growing demand for the company's products outside of the diabetes- and obesity-care products that make up the majority of its business. In addition, the company is making an effort to have some diversity to its revenue streams, although it is obviously heavily focused on diabetes.

In conclusion, this was quite a strong quarter for Novo Nordisk. The company performed quite well in the face of the coronavirus outbreak, which was somewhat expected. The growth was not however quite as strong as it appears at first because some of it was driven by stockpiling in preparation for the pandemic. The company's core business does appear quite strong overall and Novo Nordisk continues to be well-positioned for forward growth.

Follow Power Hedge and get email alerts
+
Add a comment
Disagree with this article? Submit your own.
To report a factual error in this article, click here.
Your feedback matters to us!