The Variable Changing Price Momentum Indicator (VC PMI) has shown that gold has been failing to break out above the previous high made on April 14 of about $1,788.

There is no guarantee that the price will come down to $1,712, but the VC PMI provides that level as a potential target.

Gold is still adjusting to the new fiscal policies. All the trillions of dollars coming into the economy are having a major effect on debt levels.

Even though governments are dumping money into the economy, we have yet to see any sign of a recovery.

We expect to see many more bankruptcies. The change is removing much of the over-leveraging that was in the market.

A Shift in Paradigm

Paradigms are generally defined as a framework that has unwritten rules and that directs actions. A paradigm shift occurs when one paradigm loses its influence and another takes over.

The Variable Changing Price Momentum Indicator (VC PMI) has shown that gold has been failing to break out above the previous high made on April 14 of about $1,788. That high was made after the market collapsed as the pandemic hit. We rallied from there all the way up from the low in the $1,460 area. It was a nice $300 move. Most gold traders wait years, if not decades, for such moves. In terms of what happened to the market, it established what we believe was a change in the paradigm in the gold market as it transitioned from a commodity into a currency. Within three days, trading took out all of the selling pressure since March 9. This is a very significant turning point, especially for short sellers who were skewing price discovery in gold. The price should be based on economics, yet central banks and governments do not want gold to compete with the US dollar as the world’s reserve currency. Therefore, they have worked hard to keep the price of gold down, which allows the fiat currency, the US dollar, to retain its value. Even though we got this tremendous bearish move, the fundamental damage we have sustained economically suggests that gold should be bullish and much higher. It appears to be a descending wedge, which is bullish.

When we tried to get up to the average weekly level of $1,781 on May 18, we failed. Although it is not a guarantee, the VC PMI gives you mathematical probabilities about what the market will do from the Buy and Sell levels. Trying to predict the market is a waste of time. The key is to watch the market and, based on the structure provided by the VC PMI, to let the market tell you which way the market is likely to go. You have to leave your emotions out of it, and do what the VC PMI is telling you. 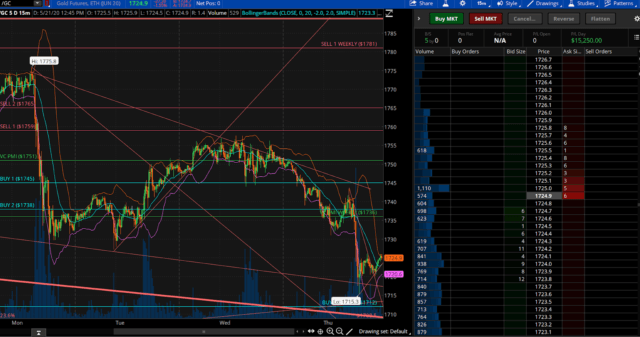 On the chart, the bars in green show that there are more buyers than sellers. The red bars mean there are more sellers than buyers. As the market falls, sellers come into the market, until it meets solid buying.

The average daily price is $1,751. On the left are the daily levels and data. The extreme below that is $1,745 (Buy 1), and if the market reaches that level, there is a 90% probability of the market reverting back to the mean from that level. The extreme above the mean tells you where to take profits. If the price closes above the Sell 2 daily level, it connects the algorithm to the weekly numbers on the right.

When the price breaks out of the daily levels, it then moves into the weekly levels. The daily Buy 2 level is $1,738. The price has broken that Buy 2 level, so now, we look at the weekly numbers below. The average weekly price is $1,738. Gold came down to that average price and met the target. The weekly average price is right under the daily Buy 2 level. The Buy 2 level, when activated, has a 95% of a reversion to the daily mean. If gold goes down through the Buy 2 level, it then activates the weekly Buy 1 level of $1,712. If gold is trading around the daily or weekly average price, the VC PMI recommends not trading in that area. In that average area, there is a 50/50 chance of the marketing going up or down. The daily numbers are indicating that the market is oversold when it comes down below the Buy 2 level. We are getting bearish indicators daily and weekly, which has activated the daily target of $1,712. There is no guarantee that the price will come down to $1,712, but the VC PMI provides that level as a potential target.

Gold is still adjusting to the new fiscal policies. All the trillions of dollars coming into the economy are having a major effect on debt levels. Even though governments are dumping money into the economy, we have yet to see any sign of a recovery. We expect to see many more bankruptcies. The change is removing much of the over-leveraging that was in the market.

The market will always anticipate news. Gold discounted all the bad news coming out, and it rallied, gaining $300. Now, that rally is subject to a simple correction. From the low that we made on March 16 of $1,450.90, the recent highs were $1,788. Using Fibonacci retracement, we can see where potential levels are. From the $1,788 high, the market came back down on April 21. That was the beginning of the consolidation in gold, before it came back up to test $1,764. We are coming back to the pivot breakout from $1,712 on May 14. That level of $1,712 coincides with the Buy 1 level of the weekly signals. If you went short at the extreme above the mean, you should take profits at the Buy 1 level: your first target. It also corresponds with a 23.6% retracement. That level marks a convergence of indicators. The second level below the mean is $1,667. The low so far is $1,715.3 today. It is already alerting us that as the market comes into these levels to begin to cover short positions. This area identifies a strong area of support. 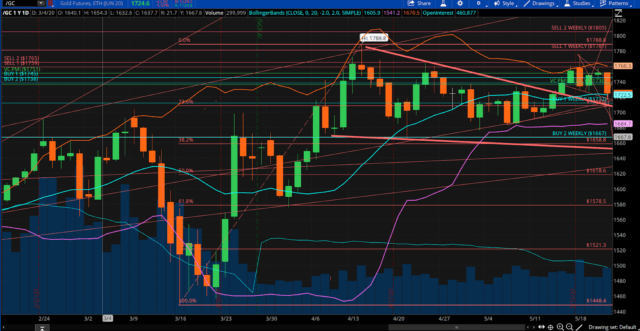 Even though we have been expecting this counter-trend correction into the $1,725 area, we are beginning to see the process of the mean reversion approaching the extreme below the mean. Now, wait until the price trades at those levels - it may not. If it does, that is when the alarm goes off. Once we cleaned out all of these weak buyers who could not sustain the selling pressure, they threw in the towel at the level the VC PMI is recommending to begin to look for buyers to come into the market.

Follow Equity Management Academy and get email alerts
+
Add a comment
Disagree with this article? Submit your own.
To report a factual error in this article, click here.
Your feedback matters to us!