Stock markets in the United States continue to outpace the rest of the world in 2020 even as the country is uniquely impacted by the virus impact. As of Thursday morning, the United States, which makes up just over 4% of the world population, had 31% of the world's 5.0 million confirmed COVID-19 cases, according to the Johns Hopkins University Coronavirus Resource Center. 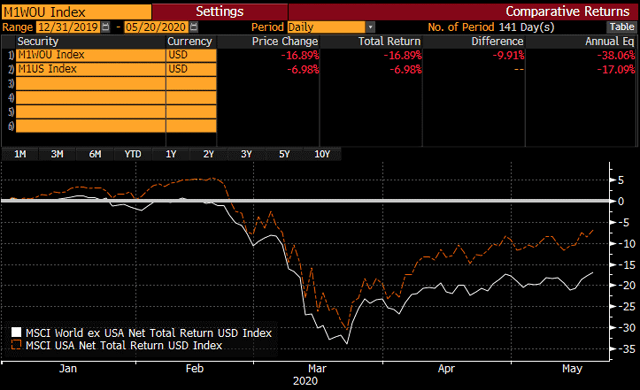 This continues a long-run trend of outperformance that has its roots in the last financial crisis. 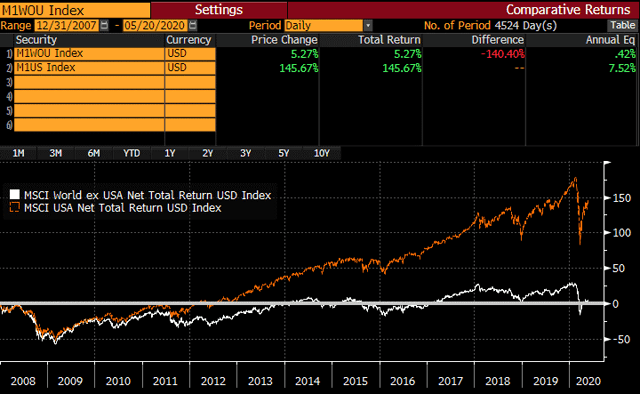 Up and through 2007, however, global stocks had slightly bested their U.S. counterparts over a nearly four decade horizon. 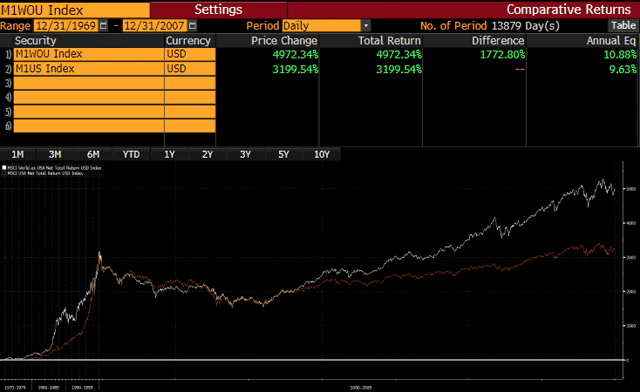 Using rolling monthly returns (and including a partial May 2020), the United States has outperformed the world (ex-U.S.) by 15.9% over the past year. This puts the current U.S. outperformance in the 84th percentile of all experiences over the past 50 years. 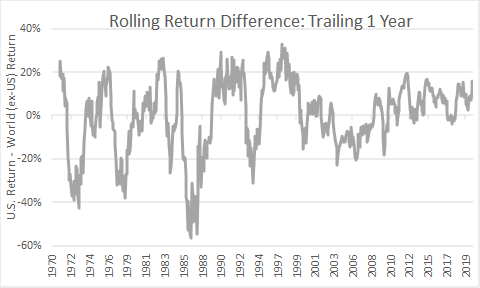 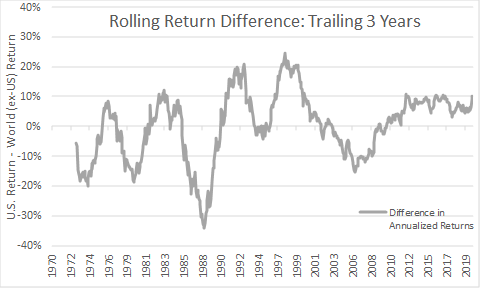 Over a rolling 5 year period U.S. stocks have outperformed by roughly 8.5% annualized, a figure that would be in the 83rd percentile of all observations in this dataset. The best relative returns for U.S. stocks happened during the inflation of the tech bubble in the late 1990s. The worst relative returns for stocks happened during the outperformance of Japanese stocks in the mid-1980s. 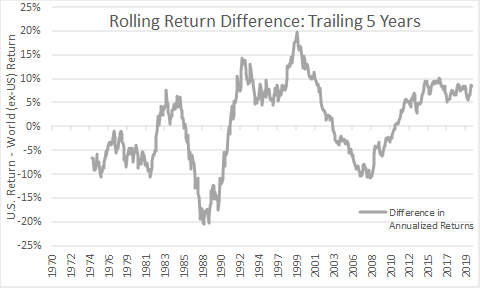 Over the last decade, U.S. stocks have returned 12.2% per annum, and global stocks (ex-U.S.) have returned just 4.6%. This 7.6% annualized outperformance over a 10-year period was only exceeded during the tech bubble run-up. Global stocks outperformed U.S. stocks by that amount just briefly over periods ending in the mid-to-late 1980s. 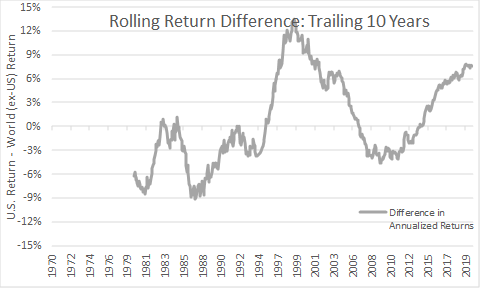 I hope this article gives a helpful high level view of the relative performance of U.S. stocks versus global peers as Seeking Alpha readers consider their global diversification. In the opening article in this series, I gave some reasoning for why U.S. stocks have outperformed - flight-to-quality and reserve currency status, outsized fiscal and monetary policy response, and unique tech leadership important to an economy that has shifted online. In a future article, I will brave the rocky terrain of looking at trailing and forward earnings across major global markets, with the caveat the earnings forecasts need wider error bands around them in the current environment.

Disclaimer: My articles may contain statements and projections that are forward-looking in nature, and therefore inherently subject to numerous risks, uncertainties and assumptions. While my articles focus on generating long-term risk-adjusted returns, investment decisions necessarily involve the risk of loss of principal. Individual investor circumstances vary significantly, and information gleaned from my articles should be applied to your own unique investment situation, objectives, risk tolerance and investment horizon.

Ploutos
21.14K Followers
Institutional investment manager authoring on a variety of topics that pique my interest, and could further discourse in this online community. I hold an MBA from the University of Chicago, and have earned the CFA designation. My articles may contain statements and projections that are forward-looking in nature, and therefore inherently subject to numerous risks, uncertainties and assumptions. While my articles focus on generating long-term risk-adjusted returns, investment decisions necessarily involve the risk of loss of principal. Individual investor circumstances vary significantly, and information gleaned from my articles should be applied to your own unique investment situation, objectives, risk tolerance, and investment horizon.
Follow

Additional disclosure: Like many U.S.-based investors, I have a U.S.-centric portfolio, and undertook this research to examine if this home country bias could be leaving me ill-exposed to a reversal in relative returns.