Meanwhile, the relationship between the two precious metals dates back five thousand years to the first Egyptian Pharaoh Menes. In around 3000 BC, he declared that two and one-half parts silver equal one-part gold when the metals were the primary means of exchange and symbols of wealth.

In 2020, the ratio blew past the previous high like a hot knife goes through butter. Since the new peak, the ratio turned lower, which could validate that gold and silver prices are heading higher over the coming months and years. If silver is taking over as the leader of the two metals, the Velocity Shares 3X Long Silver ETN product (USLV) could be a useful tool on price corrections over the coming weeks and months. USLV provides a leveraged return compared to the iShares Silver Trust (SLV), the most liquid silver ETF product. On May 9, I wrote an article for Seeking Alpha outlining the similarities between 2008 and 2020. On that day, July silver was below $16 per ounce. The silver-gold ratio was close to the 110:1 level.

A new record high in March when silver tanked

At the end of 2019, it took approximately 85 ounces of silver to purchase an ounce of gold on the continuous futures contracts on COMEX. The nearby gold futures contract settled at $1520 at the end of December 2019, with silver futures at $17.90 per ounce.

The previous all-time high in the ratio on the quarterly chart came in 1990 at 94.58:1. Last year, it got up to a peak of 92.5:1, but retreated by the end of the year. When risk-off selling hit the silver market in March and took the price to its lowest level since 2009, gold declined, but its losses were modest compared to silver. Silver fell below $12 per ounce, and the ratio soared. 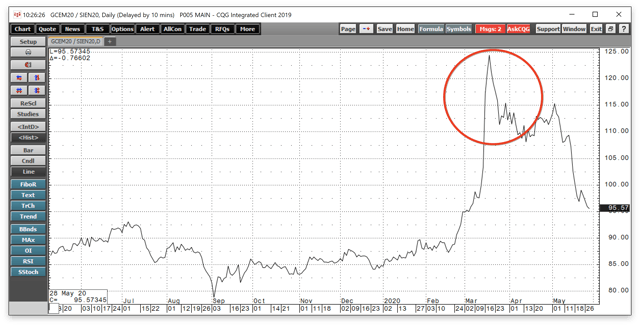 The chart shows that in mid-March, it took 124.4 ounces of silver to purchase a single ounce of gold, a new modern-day record high. Gold never declined below its breakout level from June 2019 at $1377.50. The yellow metal only reached a low of $1450.90 in March, but silver’s descent to $11.74 sent the ratio flying on the upside.

Since March, and my May 9 piece, the price of silver has come storming back in the upside. 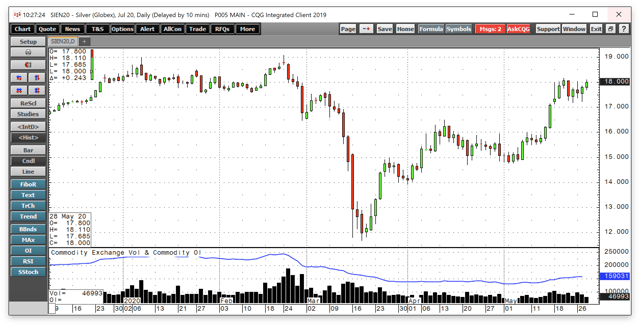 The decline in silver caused many market participants holding speculative long positions to flee the market in February and March. The total number of open long and short positions in the COMEX futures market declined from a record high 244,705 contracts on February 24 to 159,031 on May 27, a drop of 35%, At the low, the open interest metric reached 131,830 contracts. Silver recovered most of its losses; many market participants remain on the sidelines after the brutality of the price action in February and March. On May 9, open interest stood at 137,969 contracts. The rise of over 21,000 contacts as the price moved over $2 higher tends to be a technical validation of the current bullish trend in the silver futures market. 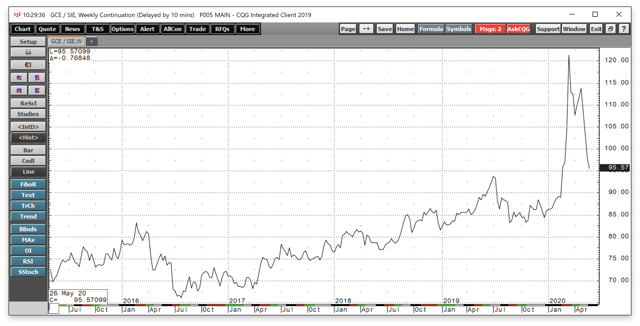 Meanwhile, the weekly chart of nearby COMEX gold futures divided by July silver futures shows that the ratio dropped steadily to below the 96:1 level as of May 28.

I often refer to silver as a “trading sardine.” The metal tends to attract speculative interest that determines the price behavior. The risk-off environment in March is the perfect example. As market participants moved to the sidelines, it created a mass exodus from the silver market. In a testament to silver’s underlying strength, the selling dried up, and the price moved higher even though many market participants that had held long positions have not returned to the futures market. When and if they return, it could take the price to new highs as silver continues to play catch up with its precious cousin, gold.

While many doubt the significance of the silver-gold ratio these days, the price relationship has a history of falling during bull market periods. 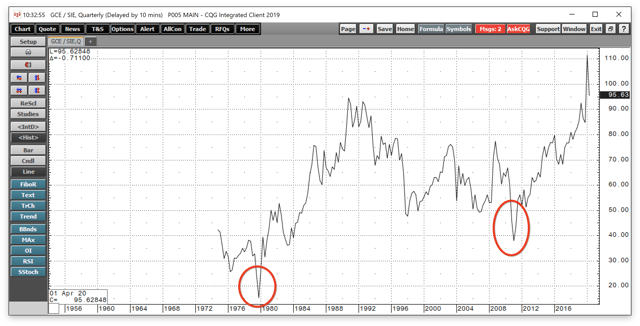 Time will tell if silver and gold are heading much higher after the blow-off low in the silver market in March. The price action from 2008 could stand as a model for the coming months and years.

Central banks and governments injected massive amounts of liquidity into the global financial system in 2008, causing pressure on the value of fiat currencies. From June through September 2008, the US Treasury borrowed a record $530 billion to fund the stimulus. In May 2020, the Treasury borrowed five times that amount at $3 trillion. They will likely be borrowing even more in the coming months. If 2008 required waves of liquidity, COVID-19 is causing a tidal wave of central bank and government actions to stabilize the economy after a self-induced coma. Gold and silver prices soared from 2008 through 2011. We could look back at the 2020 lows in gold and silver at $1450.90 and $11.74 as the buying opportunities of a lifetime. The two metals have never traded at their respective 2008 lows since the crisis a dozen years ago.

The move to a record high in the silver-gold ratio and its subsequent retreat could signify that the relationship is now on a path downward. The prices of the metals may continue to make higher lows and higher highs over the coming months and years as the impact of the stimulus eats away at the purchasing power of the world’s fiat currencies.

If silver is going to lead, USLV on dips

I believe that any corrections in gold and silver will be buying opportunities in a continuation of bull market conditions in the precious metals. The first level of significant long-term resistance in the silver market stands at the 2016 high of $21.095 per ounce. It took silver until September 2010, two years from its 2008 low, to surpass the 2008 peak at $21.185. This time, it may not take as long given the underlying strength in the market. Gold broke out to the upside in June 2019 and has never come closer than $73.40 to revisiting its technical breakout level in 2020.

In bull markets, silver tends to take the lead from gold. From 2008-2011, gold moved 2.82 times higher, while silver’s price moved over 5.9 times higher. The most direct route for a trade or investment position in the silver market is via the physical market for bars and coins or the futures and futures and futures options market on the COMEX division of the CME. For those looking to magnify the price action on the upside in silver without venturing into the futures market, the Velocity Shares 3X Long Silver ETN product (USLV) provides an alternative. The fund summary for USLV states: 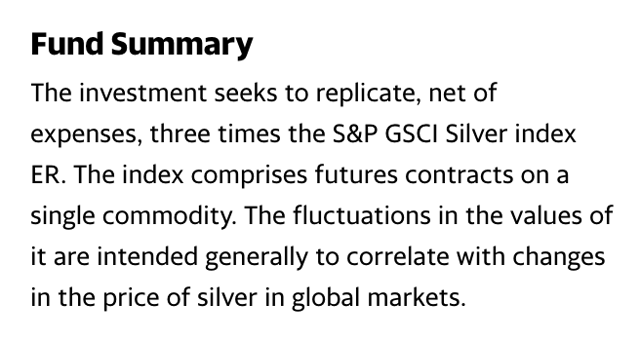 USLV has net assets of $222.3 million, trades an average of 907,461 shares each day, and charges a 1.65% expense ratio. DSLV is the inverse product, for those looking to magnify the downside of the market. The two products are trading tools for short-term risk positions in the silver market. Since they operate on leverage, time is your enemy with USLV and DSLV as they suffer from time decay when the market moves against them or remains static.

The price of nearby silver futures rallied from $11.74 in mid-March to a high of $18.11 in late May on the continuous futures contract, a move to the upside of 54.3% in a little over two months. 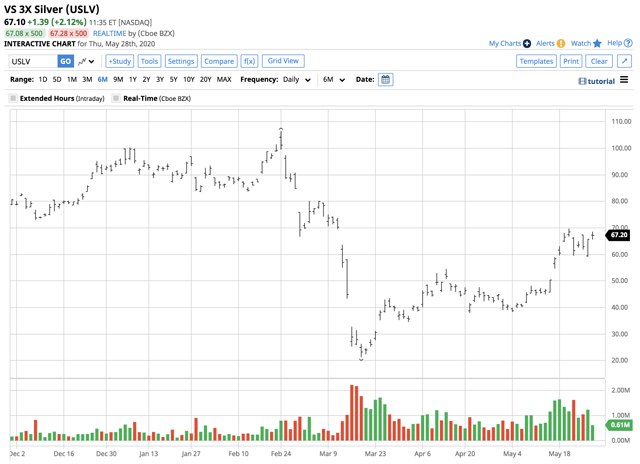 The fund summary and top holdings of the iShares Silver Trust (SLV) includes: 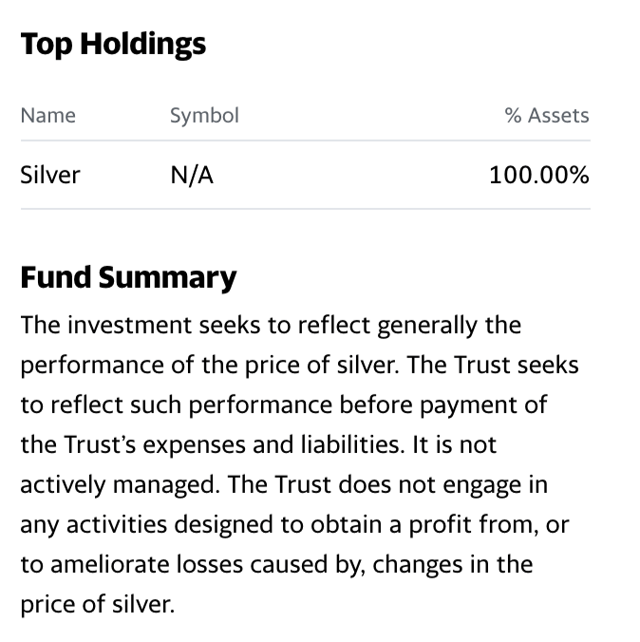 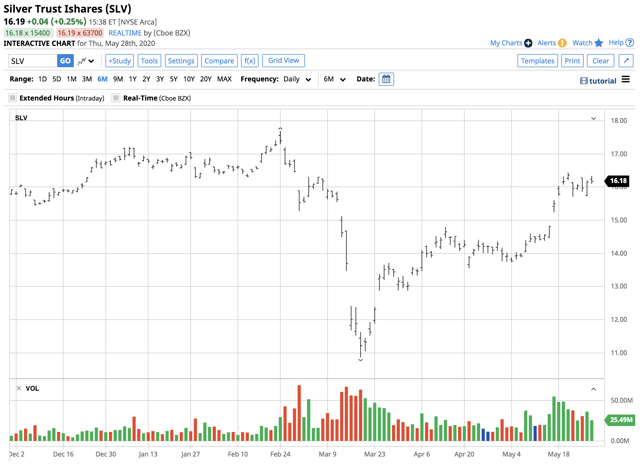 Over the same period, SLV moved from $14.35 to $16.45 per share or 14.6%. SLV holds 100% of its net assets in silver bullion, and provides an unleveraged return compared to the price of the precious metal. I prefer the USLV product for short-term trading and the SLV product for medium to long-term investing purposes.

Stimulus is bullish for gold and silver prices. If 2008-2011 is a guide, we could see a significant move to the upside in the silver market over the coming months and years. USLV is a short-term trading tool that could enhance your returns when trading the precious metal from the long side of the market.

The silver-gold ratio has declined since its record high in March. In 2008, it rose to a high of almost 80:1 during the risk-off period when the stimulus from central banks pushed the relationship between the two precious metals to a low of below 33:1 in 2011. History rarely repeats precisely, but it does tend to rhyme over time. Silver was back at the $18 level on the July futures contract on Thursday, May 28.

Andrew Hecht
27.9K Followers
Author of Hecht Commodity Report
Weekly commodities commentary and calls, from a Wall Street veteran
Andy Hecht is a sought-after commodity and futures trader, an options expert and analyst. He is the #2 ranked author on Seeking Alpha in both the commodities and precious metals categories. He is also the author of the weekly Hecht Commodity Report on Marketplace - the most comprehensive, deep-dive commodities report available on Seeking Alpha.

The author is long silver and gold