My cardiologist and diabetes doctors did not forbid me from drinking beer. I am therefore endorsing Tsingtao Brewery Company (OTCPK:TSGTY) (OTCPK:TSGTF) as a buy. Tsingtao Brewery is a good bet on the growing $522.23 billion/year global beer industry. People spend around $70.18/year on their favorite beers. Fortune Insights expects the beer industry to grow to a $962.39 billion/year industry by 2026. 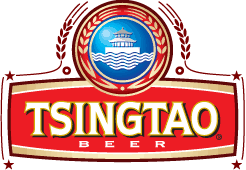 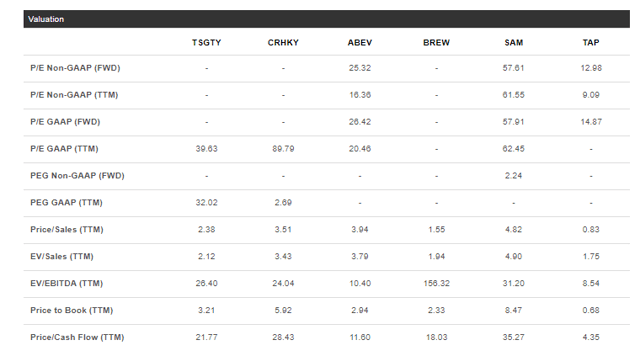 TSGTY’s TTM Price/Sales is only 2.38, and its TTM Price/Book valuation is just 3.21. This is lower than CRHKY’s 3.51 TTM P/S and 5.92 TTM P/B valuation ratios. The TTM EV/Sales of TSGTY is just 2.12. This is again lower than CRHKY’s 3.43x. Aside from its stock’s lower valuation, Tsingtao Brewery is consistently profitable since 2010. China Resources Beer Holdings’ financial history said it suffered annual net losses in 2014 and 2015.

Tsingtao Brewery boasts a total cash reserve and short-term investment of $2.47 billion. Its total debt is only $225.9 billion. Going forward, Tsingtao Brewery can use some of its cash reserves on more aggressive advertising. Saturation advertising campaigns on TV and online can entice more Chinese to consume more Tsingtao beer. There’s a global pandemic with no vaccine coming soon. It is safer to stay at home and drink beer.

The consistent profitability of Tsingtao is in spite of its stagnant sales performance. Due to overcrowding in China’s beer market, Tsingtao has a poor 5-year revenue CAGR of -1.79%. Going forward, Tsingtao’s future prosperity will depend on its international sales. TSGTY is a buy because e-commerce portals like Lazada allows us Filipinos to buy our favorite Tsingtao beer. Drinking Tsingtao beer alleviates our quarantined lives here in the Philippines. 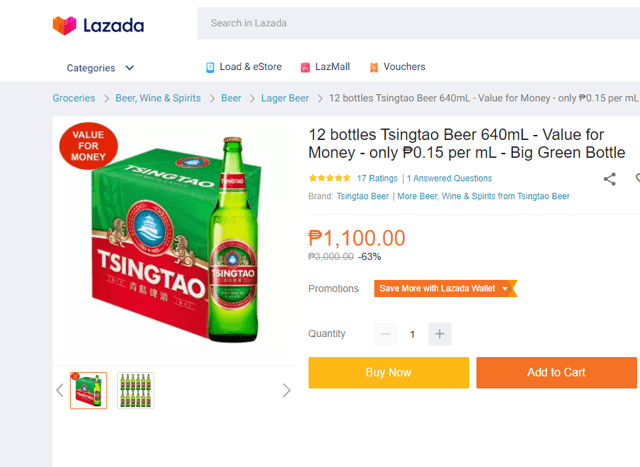 Tsingtao is the most exported beer brand of China. Aside from Asians, Europeans also like Tsingtao Beer. Tsingtao’s pilsner won a silver award in the German style light beer category in the European Beer Star competition. Tsingtao Brewery also won a gold medal in last year’s World Beer Championships held in the United States. We should invest in Tsingtao Brewery because it is now producing beer products that appeal to non-Chinese drinkers. Tsingtao beers are now exported to more than 100 countries. 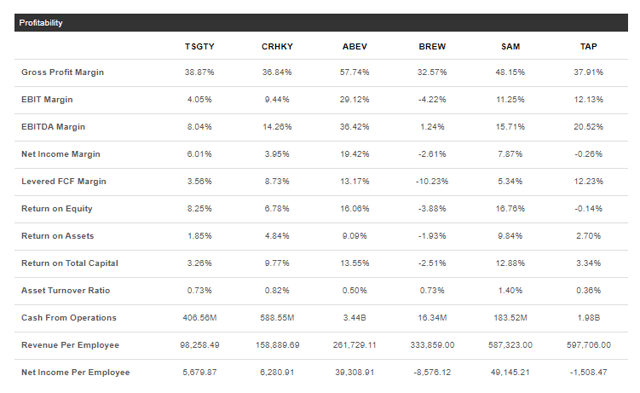 Going forward, the lackluster sales growth of Tsingtao Brewery can still improve. Selling Chinese beer in foreign countries is not going to be seen as national security threat for the United States. The U.S. government will not mind if Tsingtao starts saturating Africa with its entry-level and premium beer products.

Africa’s 2018 beer production was estimated to be around 140.94 million hectoliters. That continent obviously has a solid population of beer lovers. Tsingtao can improve its sales growth by drenching Africa with its award-winning beer products.

Why You Should Bet On Chinese Beer Drinkers

China’s huge 1.4 billion population is why investing in its $61.27 billion industry is very compelling. Chinese beer drinkers consume an average of 24.8 liters/year. The average revenue from a beer drinker in China is $42.35. Due to COVID-19, beer drinking in China will probably increase while there are government-mandated travel restrictions and quarantines.

Further, many countries are restricting tourism while there’s an ongoing pandemic. In other words, affluent/middle-class Chinese people have greater savings when they cannot travel abroad for vacations. Tsingtao Brewery’s business in China can soar when Chinese people have idle cash and unused credit card balances. 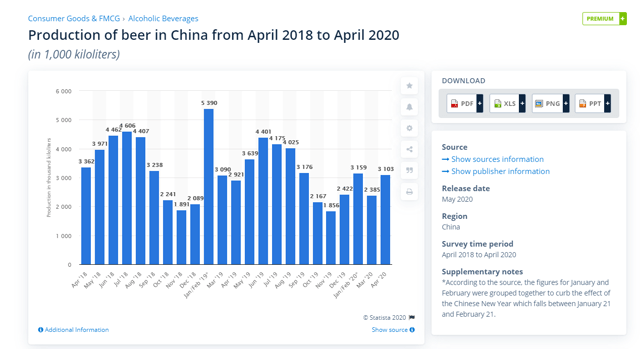 Political Risk Does Not Diminish The Good Investment Quality

The biggest risk to investing in Tsingtao Brewery is that it is still likely controlled by a Chinese state-owned firm, Tsingtao Brewery Group. Pres. Trump has not yet signed into law the U.S. Senate bill that compels U.S.-listed Chinese companies to certify themselves as not state-owned or state-controlled. I believe that the huge Chinese-American population (more than 5 million) in America might compel Trump not to sign the U.S. Senate bill. Signing it to a law could endanger Trump's re-election bid in November. Most of those 5 million American-Chinese voters won’t like it if Trump signs a Senate bill that discriminates against Chinese companies.

The political reality is that there are more than 150 Chinese firms listed on U.S. stock exchanges. These companies can combine their cash reserves and make campaign donations to any politicians opposed to Trump and the new U.S. Senate bill.

There are U.S. institutional investors who hold shares in Tsingtao Brewery. It might be best for Seeking Alpha readers/subscribers to just buy the Hong Kong Stock Exchange ticker of Tsingtao Brewery, 168:HK. Trump might just sign the Senate bill that could force a ban on the OTC trade of Tsingtao Brewery’s stock on the U.S. stock exchange.

The half-trillion per year beer industry is still bigger than video games ($159.3 billion/year) and digital advertising ($336 billion/year). We should try to enrich ourselves from the world’s insatiable appetite for beer. Tsingtao Brewery’s stock deserves a spot on your growth-focused investing portfolios. 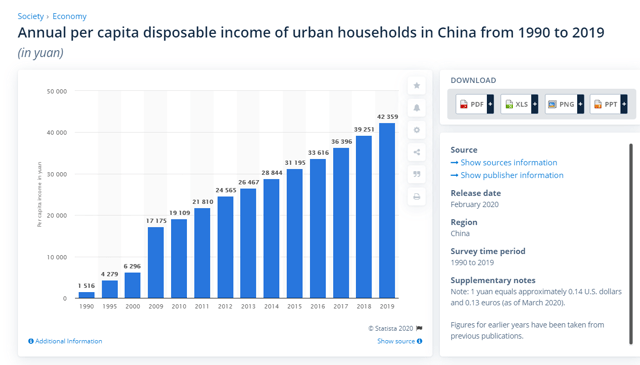 The almost $6k disposable income of urban-dwelling Chinese should lead to stronger beer spending. China's per capita beer spending of $42.35 will eventually rise to world’s average of $70.18.

Better buy TSGTY or 168:HK while the stock still trades at below 2.5x EV/Sales valuation. Tsingtao Brewery’s future is secure because Chinese people still have a long way to go before they can join the world’s elite beer drinkers. China’s current average of 24.8 liters per capita beer consumption is way below the 75 to 143 liters per capita consumption of the world’s top 20 beer-loving countries.

Motek Moyen
6.35K Followers
I am 100% Filipino, with 25% maternal Chinese blood. My background is 20 years in creative/advertising industry. I am a freelance quantitative equity analyst now, but I also enjoy using technical indicators. I still do part-time multimedia edits, copywriting, UI/UX designs, and computer repair & programming. I DO NOT gamble/invest on U.S.-listed stocks.

Disclosure: I am/we are long TSGTF, BUD. I wrote this article myself, and it expresses my own opinions. I am not receiving compensation for it (other than from Seeking Alpha). I have no business relationship with any company whose stock is mentioned in this article.

Additional disclosure: We will also go long on 168:HK