The official rationale provided is that it is due to COVID-19 situation.

In my view, this is not the complete story. In my opinion, Bramson's ideas were premised on rather simplistic assumptions and misaligned understanding of investment banking dynamics as well as post-2008 regulatory framework. 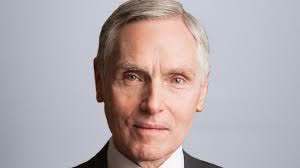 BCS shareholders, on the other hand, should be encouraged by recent positive operating performance of the bank. It is picking up market share in Investment Banking division (IB) whilst remaining very conservative in providing for consumer loan losses. 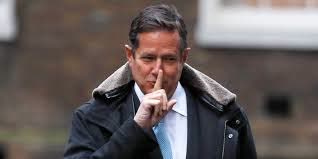 The share price is clearly depressed now, trading at less than 0.4x tangible book value. The current short-term headwinds are well-known and include COVID-19 impact, lower rates in the UK (and U.S.), as well as the spectre of negative rates in the UK.

Given that the cost of capital of Barclays is ~9-10 percent. He concluded that the IB was destroying capital (fair point) and judged that Mr. Staley will not be able to materially improve returns anytime soon.

So, the conclusion was shrink the IB and reallocate capital to the consumer bank. Too easy, right?

In 2018, his vehicle, Sherborne Investors LLP, purchased 5.8% of the common stock and started ramping up the pressure for a change of strategy, CEO replacement, as well as unsuccessfully targeting a board seat.

The gaps in the thesis

At the time, I was quite surprised by the apparent lack of understanding of the banking industry and, even more so, astounded that investors actually backed him up on this adventure.

Clearly, there are gaping holes with his thesis that anyone with an average background in banking can see through.

Firstly, shrinking an investment bank inorganically is often a capital-destroying exercise. We already have seen it playing out with a number of European banks (Deutsche Bank (DB) one such example). Barclays also had its non-core unit which generated substantial losses for many quarters until it was fully wound down.

As soon as you start shrinking an IB, revenues pretty much halt immediately, but your expenses remain intact for a very long time. You cannot shut down the trading systems maintenance until the last derivative contract expires or sold. Still need to keep support staff to manage the risk and deal with regulators. As soon the market sniffs it out, you are likely to lose your best employees and money spinners - no one wants to stay with a shrinking outfit, never knowing which business line or geography is next on the chopping block. Invariably, you begin to lose the best people and market share even in your most profitable business lines. Self-inflicted harm, really - no other way to describe it.

Secondly, let's assume you managed to extract meaningful capital from the IB over time (big assumption!). There isn't really the demand for lending in the consumer bank to soak all that capital. Unless, of course, you go up the risk curve and/or compete on price and eroding margins. Keep in mind, the capital employed in the UK consumer bank is ~10 billion versus ~27 billion in the IB.

Thirdly, you lose diversification benefits of uncorrelated businesses. Trading income in the IB generally goes up sharply during times of crisis as investors and corporates are forced to quickly reposition their portfolios. It is a bonanza for the IBs intermediating these markets. This was true during the 2008/2009 global financial crisis as well as in the current COVID-19 crisis. This typically coincides with at the time banks need earnings most - exactly when you are required to book those outsized provisions in the consumer book.

Finally, the post-GFC regulatory framework plays a key role as well. The IB business is a low RWA density/high leverage business whereas the Consumer Bank is exactly the opposite. As such, in a stress-test scenario, that diversified business mix results in lower capital requirements than certain peers. In other words, the IB subsidises, to an extent, a lower capital requirement for the CB.

The IB delivered an exceptional performance with income rising 44 percent year on year and trading income (Markets) up 71 percent. This is a much stronger performance than large U.S. peers and continues the recent quarters' outperformance by Barclays' IB. Also, note a strong RoTCE of 12.1 percent despite a material tick-up in impairment costs due to oil price decline (already reversed) and single name exposure. 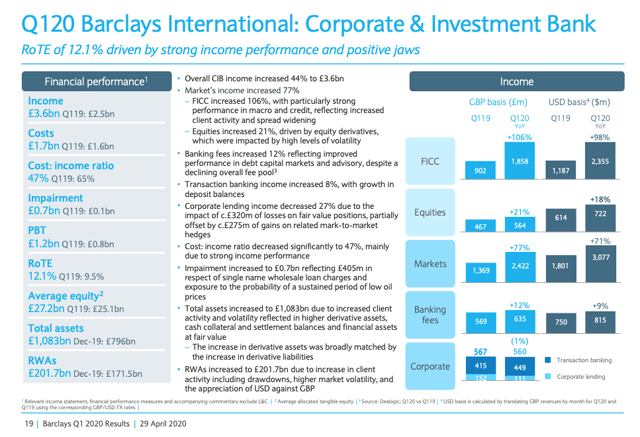 CB, on the other hand, faced significant headwinds both on margins and increased provisions for loan losses. 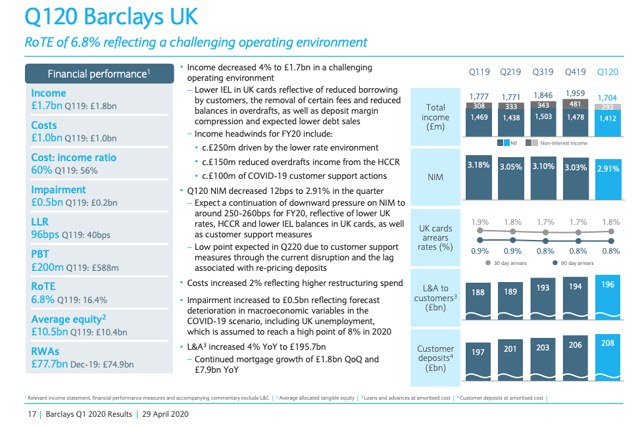 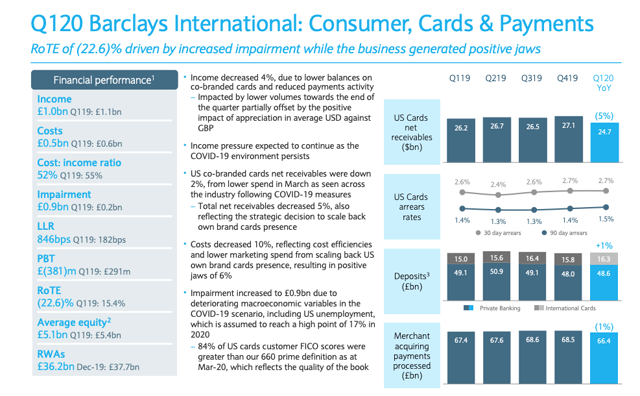 Barclays performance in Q1'2020 is effectively the final death knell in the corporate raider's thesis on shrinking the IB. Mr. Staley clearly won this duel by a knockout, and it is time for Mr. Bramson to eat humble pie.

Could you imagine what have happened under COVID-19 conditions, if Bramson somehow managed to force his way? The most likely outcome would have been a dilutive equity call. Fortunately, in this unprecedented crisis, Barclays is operating from a clear position of strength.

It is little comfort for Barclays shareholders, though, given the current valuation of the stock. It still trades at distressed valuation levels measured on an absolute but also on a relative basis to U.S. peers. The latter is mostly attributable to the uncertainties centred around the capital return narrative - in other words, when will Barclays resume the dividend and start buying back the stock? But I will elaborate on this further in my next article.

Having said that, the intrinsic value of this franchise is clearly not reflected in the share price. My target share price for BCS is $9.

Disclosure: I am/we are long BCS. I wrote this article myself, and it expresses my own opinions. I am not receiving compensation for it (other than from Seeking Alpha). I have no business relationship with any company whose stock is mentioned in this article.