The gold mining sector includes various kinds of companies. Some of them are focused directly on gold production, the aim of some of them is only to find a feasible gold deposit, develop it to an advanced stage and sell it to another company. There are also royalty and streaming companies that provide capital in exchange for share on gold production of other companies. There are also project generators, companies that stake a huge number of prospects, realize only the early exploration programs, and seek a majority partner that will finance the rest of exploration and development costs. And there are also companies that combine several of the above-mentioned characteristics. One of them is Golden Valley Mines (OTCQX:GLVMF).

Golden Valley Mines holds a major equity stake in Abitibi Royalties (OTCPK:ATBYF), Val-d'Or Mining Corporation (OTCPK:VDOMF), and International Prospect Ventures (OTCPK:URANF). It also owns a 15% free-carried interest and a 3% NSR royalty on the Lac Barry project, 4% NSR (excluding gold) royalty on the Cheechoo project, and 100% of the Centremaque project. And it has a 70:30 joint-venture with Eldorado Gold (EGO) on 9 properties in Quebec and Ontario. 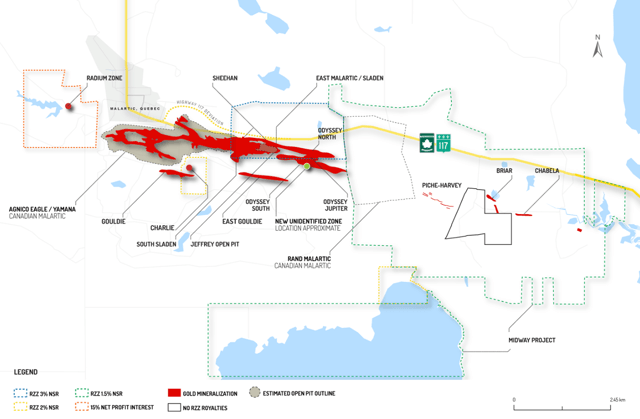 Abitibi's strategy is to acquire royalties on land packages adjacent to major producing mines. As can be seen above, it owns royalties on numerous claims in the Canadian Malartic mine area (some of them are already generating cash flows). But besides the Canadian Malartic-related royalties, it owns also royalties on projects near other big mines, like Agnico Eagle's LaRonde mine, Evolution Mining's (OTCPK:CAHPF) Red Lake mine, or Hudbay Minerals' (HBM) 777 mine (the complete list can be found here). Abitibi Royalties is debt-free, and due to the cash flows generated by some of its Canadian Malartic-related royalties, it can afford to pay a dividend of $0.0125 per month ($0.15 per year). Golden Valley owns 5.6 million shares, which means that it receives from Abitibi Royalties around $840,000 in dividend payments per year. Moreover, Abitibi claims that its aim is to reduce the share count from 12,501,410 shares to 10 million shares over the next three years. Although this aim may be too ambitious, given Abitibi's current valuation, any reduction of the share count increases Golden Valley's ownership as well as its dividend incomes.

Val-d'Or Mining Corporation is 37.2%-owned by Golden Valley Mines. It is a tiny company with a market capitalization of only $5 million. It owns several projects in early exploration stages, located in Quebec and Ontario.

International Prospect Ventures is 16.5%-owned by Golden Valley Mines. It has a market capitalization of approximately $2.5 million. It owns a gold prospect in Ontario and a large land package in the Pilbara region of Western Australia. The land package covers an area of 1,026 km². International Prospect Ventures is only starting to explore the property, but numerous gold nuggets were discovered by the metal detectorists.

Lac Barry project was acquired by Bonterra Resources (OTCQX:BONXF) and it became a part of its land package that includes the Gladiator and the Barry project, with combined resources of more than 1.9 million toz gold. Moreover, the Lac Barry prospect is only 15 km to the south of Osisko Mining's (OTCPK:OBNNF) Windfall project, which further demonstrates the exploration potential in the region. Golden Valley Mines owns a 15% free-carried interest and 3% NSR royalty on Lac Barry.

Centremaque project is 100%-owned by Golden Valley Mines, but O3 Mining (OQMGF) has an option to acquire an 80% stake by expending $4 million on exploration and issuing shares worth $250,000. After the option is exercised, Centremaque will retain a 20% free-carried interest and 1.5% NSR royalty on the property. Centremaque was included (at least provisionary) into O3's Central Cadillac-Alpha property. The recent drill holes from the Epsilon target located at Centremaque provided some very promising results, including 9.3 g/t gold over 6 meters or 13.4 g/t gold over 1.5 meters.

Eldorado Gold joint-venture includes 9 properties in Quebec and Ontario. The 70:30 joint venture was created with Integra Gold before it got acquired by Eldorado. However, the properties are only in the early stages of exploration.

As can be seen, Golden Valley Mines holds interests in numerous projects. As they are only in the early exploration stages, it is hard to value them. However, they provide some non-negligible long-term upside potential. Moreover, their development is funded by other entities; for Golden Valley, the upside potential comes virtually risk-free.

And, of course, besides the royalties and other interests in exploration projects, there are Golden Valley's equity interests. And this is where the true value lies. While the shares of Val-d'Or Mining and International Prospect Ventures have a market value of only around $2.3 million, the 44.8% stake in Abitibi Royalties has a market value of almost $92 million. And it is here, where Golden Valley gets interesting, as its current market capitalization is only $60.6 million. As it has no debt and as of the end of Q1, it held cash and cash equivalents worth $6.3 million, its enterprise value is only $54.3 million. It means that the company is valued at less than 60% of the market value of its shareholdings. And all the other assets are completely for free.

Based on the simple maths, the Golden Valley Mines looks like a no-brainer. However, there is one problem. Its undervaluation is a long-term phenomenon. As the articles written by Matt Geiger show, the undervaluation lasts for more than two years. It can be probably explained by the fact that Golden Valley is not exciting enough. While it is great that other companies finance the development of Golden Valley's properties, they are all in the early exploration stages and it will take years before some of them get into production. Golden Valley collects dividends from Abitibi Royalties and sometimes also some payments from its partners, which help to finance its expenditures. But the shareholders don't receive anything for holding the shares and this will probably not change anytime soon. It is possible that the undervaluation will prevail also in the future. 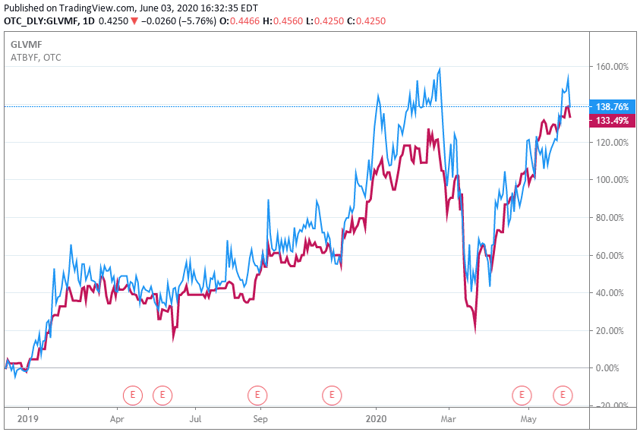 Also, the chart above shows that Golden Valley is a cheaper way of investing in Abitibi Royalties (with some bonus potential in the form of the other assets). Over the last 1.5 years, the two stocks were strongly correlated. As can be seen, Golden Valley (blue curve) had some time periods when it outperformed Abitibi (pink curve), but just like its share price outperformed during the growth periods, it underperformed during the periods of decline. As a result, both stocks recorded almost identical returns over the last 18 months.

Golden Valley Mines is an interesting company that is significantly undervalued and provides some long-term exploration potential. Its business model enables it to significantly diversify operation risks and to limit capital expenditures. On the other hand, it is probably too conservative and not exciting enough to attract a bigger interest of the investors. This is why the enterprise value of the company equals only 60% of the market value of its shareholdings. On the other hand, Golden Valley's shares are a relatively safe tool of speculating on exploration success on some of the numerous properties or on some consolidation of the royalty and streaming market segment.