For over the past week there has been extreme stock price movements in bankrupt and near bankrupt companies. Shares that most likely will be worthless and cancelled under Ch.11 reorganization plans, soared on very high volume. What happened to the "efficient market" theory? The market was anything but orderly. Some wonder if this was just irrational retail investor trading or was there actual market manipulation.

Of course prices are set by buyers and sellers. That is the problem. There is almost an unlimited amount of potential cash and buyers, but the amount of shares available to be sold is limited. Traders who think a stock price is too high and are not owners of that stock, can sell the stock short by having their broker borrow shares. The problem is that whoever loaned the shares may want them back at some point in the future and the broker for the short seller has to find a replacement for those shares.

The problem in recent days is there were "short squeezes" in the stock trading of many bankrupt and near bankrupt companies. When brokers for those who have already sold a stock short can not find shares to maintain the short position, they do a "buy-in" of the stock to close out the short position. This buying causes the stock price to increase. When there are massive amount of buy-ins because unavailability of stock to borrow, the stock price soars. This is a typical short squeeze.

There were a number of reasons for the increased number of shares sold short. The classic capital structure trade was a likely source of increased shorting. This trade is the buying of a company's debt (first lien debt, secured notes, second lien notes, or unsecured notes) and shorting the stock, which has the lowest priority for any recovery in bankruptcy. The problem is the total market value of debt for most of these bankrupt companies is much larger (often 10-20 times larger) than the total market value of the equity. A borrowing of shares problem is created if too many traders are doing this Investing 101 capital structure trade of shorting the same dollar amount of equity as the dollar value of debt purchased.

Another source of inability to borrow shares is a change in ownership of companies that are either going into bankruptcy or are already in bankruptcy. Institutions that own a stock are usually a stable source of shares to borrow, but many institutions sell bankrupt shares. Many of the new owners are just short-term traders who are a very unstable source for shares.

Transfer of shares between brokers by large holders of stock is also a problem. Some might even assert that this is actually a scheme to manipulate stock prices. If a large investor, such as a hedge fund, buys a stock thru many different brokers who then loan out the shares to short sellers, transfers those shares to their primary/prime broker where the investor has standing orders not loan any shares in their portfolio, a large amount of shares are now no longer available for short sellers. Fewer shares available for short sellers could cause the stock price to rise, benefitting the large investor.

There is a broker called Robinhood Markets that allows traders to buy/sell stocks and options with no commission and no minimums. (You can't short stock or buy/sell bonds via their trading platform.) These small retail traders (some might call them gamblers) are being blamed by investors for the current irrational trading. Based on information on their website, the number of accounts that own many of these bankrupt and near bankrupt stocks has soared-often 3-4 times the number of holders from just early last week.

I am not sure if the increased ownership by Robinhood traders is just the result of the stock price increases or if the increased ownership caused the prices to soar. According to Robinhood's website, their extended hours trading starts at 9 am and ends at 6 pm. During the recent irrational trading, there were large stock price movements prior to 9 am and after 6 pm, so it is really unclear how much blame for the large price changes should be put on Robinhood traders. In addition, stock of some bankrupt companies that had large price increases can not bought on the Robinhood platform.

Given the huge volumes the last week or so in some of these stocks, there almost certainly must be very active participation by program traders. It would be interesting to see how much profit (or loss) was made using algorithms in trading potentially worthless stock.

Some Key Examples of Irrational Trading

Bankrupt Hertz Global Holdings (HTZ) had a major short squeeze, which was followed by a plunge in prices. 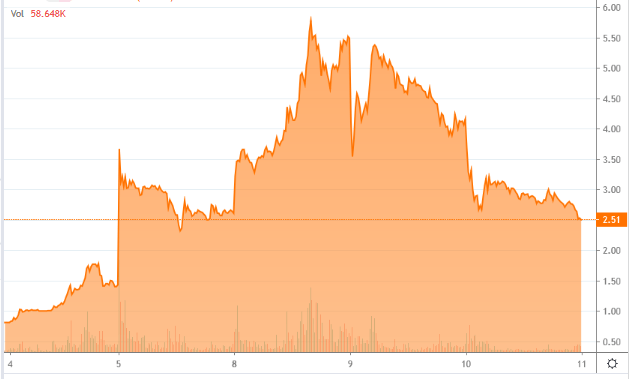 The combination of press reports about stronger used car prices, increased airline bookings, and better than expected employment numbers last week caused investors to be more positive about Hertz. This caused an increase in HTZ stock price that soared to irrational trading levels fueled by a short squeeze. In post-market trading on June 8, the price was over $6. The reality is that I still expect HTZ shareholders to receive no recovery under their Ch.11 reorganization plan.

After reading a number of recent reports about the used car market, it seems a lot of the strength is in the older used car sector. It seems that people are using their $1,200 payments as down payments on older used cars. Another problem for Hertz is that a large number of vehicles will become available as 4 million leased vehicles come off leases this year. While these leased vehicles are one to two years older than the Hertz fleet, their prices and increased availability has an impact on the price that Hertz can sell their cars.

While airline bookings are stronger, they are still at much lower levels than last year and it is highly unlikely the airlines will try to completely fill their planes with extreme discount pricing. The number of passengers is the big factor for Hertz-not airline revenue. I also think business people will use various internet platforms to conduct business instead of face to face meetings. Customers will be understanding about meeting via a computer instead of face to face.

My recent Hertz article about my expected recoveries for different bankruptcy classes was based on a modest economic recovery. They were not based upon a continuation of the March-May economic disaster. My estimates for recoveries has not changed by these recent somewhat positive press reports.

Chesapeake Energy (CHK) has been expected to file for Ch.11 for some time despite having a recent 1-200 reverse stock split. Apparently the increase in some energy prices encouraged traders to re-think the market's bankruptcy expectation, causing the CHK stock price to increase. A stock squeeze fueled the irrational trading. The price was over $80 at one point on June 8. Many short sellers, including myself at one of my brokers, had buy-ins conducted by their brokers. 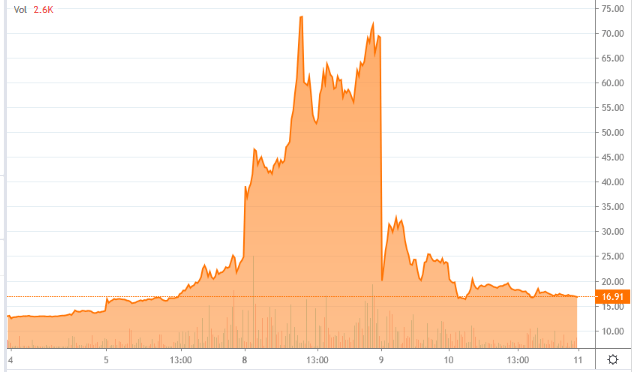 Reality hit investors on June 8 by an article from Bloomberg stating that there were expectations of a Ch.11 bankruptcy filing. There is a small interest payment due June 15. The debate now is more about if they file this weekend or use the 30-grace period and then file.

There just is too much debt that has priority over equity for CHK shareholders to receive any recovery under a Ch.11 reorganization plan.

J.C. Penney Company (OTCPK:OTCPK:JCPNQ) stock rose after reports that the equity fund Sycamore Partners was interested in buying J.C. Penney. The reports were misleading. Many traders thought they were going to buy the J.C. Penney Company. Sycamore would not pay stockholders for the company. Sycamore would just be buying the assets either as a section 363 or section 365 sale. Many investors were already expecting that Sycamore would at least express some interest in buying JCP assets because they have been aggressive buyers the last few years of retail operations. This report was nothing unexpected.

Any cash received would be distributed to holders of various claims under the Ch.11 reorganization plan. As I covered in another JCP article, the Restructuring Support Agreement-RSA-states shareholders will not receive any recovery and shares will be cancelled on the plan's effective date. 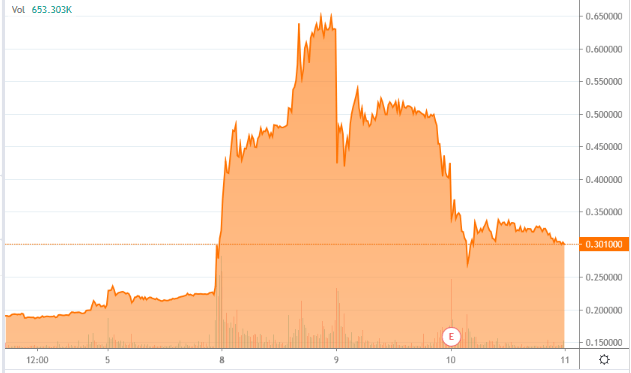 Whiting Petroleum Corp (WLL) shareholders are getting a very modest recovery of about 3% of the new equity, subject to dilution, and some warrants. The problem is that traders seem to be completely ignoring the fact that this recovery is less than $0.20 per share based upon the pricing of the notes that are getting the other 97%. There was a short squeeze a few weeks ago, so investors were not too shocked when there was another short squeeze earlier this week. 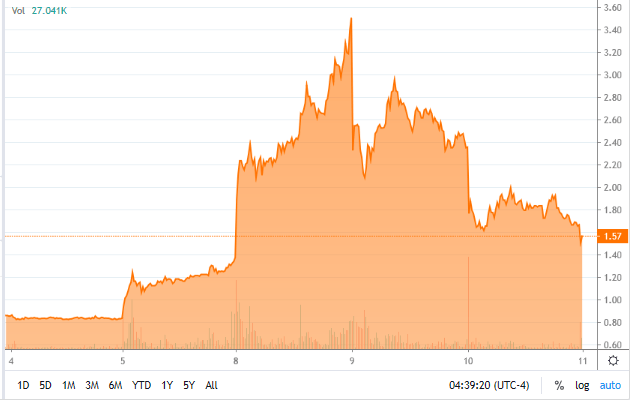 Seadrill Ltd (SDRL) is not yet bankrupt, but the shares went from $0.28 a few days ago to a high of $0.92. Valaris Plc (VAL) is expected to file for bankruptcy soon according to Henrik Alex in his excellent recent article. The VAL share price was $0.34 last week and traded as high as $2.18 this week.

What Can Short Sellers Do?

Investors who are bearish on a bankrupt or near bankrupt stock can buy puts instead of shorting a stock. Buyers of puts on these distressed companies does, however, involve some risk. First, there is the risk the stock will not actually get $0.00 under a Ch.11 reorganization plan. Shareholders could receive a toke recovery for releases. Second, there is the time problem. Shares usually continue to trade until the plan's effective date. Often these bankruptcy cases drag on and on. For example, Sears Holdings (OTCPK:OTCPK:SHLDQ) has been in bankruptcy for almost 20 months and is not expected to exit bankruptcy for many more months.

There were a number of factors that caused the irrational trading in distressed securities this week. The real problem is that traders are not acting like investors. They are ignoring the facts. They are ignoring the docket filings. They are also forgetting the bankruptcy process is not fair. It is usually controlled by large hedge funds that own first lien debt. This is most likely why Carl Icahn sold his huge holdings of HTZ. He knew that as shareholder he was going to be thrown under the bus by secured Hertz debtholders.

WYCO Researcher
6.25K Followers
B.A. in Economics; M.S. in Finance. I usually write about distressed companies and companies in Ch.11 bankruptcy. I am semi-retired after spending decades in investments.
Follow

Disclosure: I am/we are short CHK. I wrote this article myself, and it expresses my own opinions. I am not receiving compensation for it (other than from Seeking Alpha). I have no business relationship with any company whose stock is mentioned in this article.

119 Comments
To ensure this doesn’t happen in the future, please enable Javascript and cookies in your browser.
Is this happening to you frequently? Please report it on our feedback forum.
If you have an ad-blocker enabled you may be blocked from proceeding. Please disable your ad-blocker and refresh.