Recently, I wrote an article about silver prices during the great depression, and given the fundamental backdrop in the economy, I thought it would be appropriate to explore gold prices during the Great Depression as well.

I am a firm believer that history tends to rhyme, albeit not always perfectly. Although there’s still a chance we could pull back from the brink, with each passing day, it appears that we are living in, or about to begin living in, something similar to the Great Depression. Therefore, although it appears that gold is a no-brainer investment in this environment, it can be helpful to understand how gold performed in the last depression, to understand how it could perform during what may turn out to be the next depression.

For historical gold prices, we turn to a chart from Macrotrends. This first chart is a little misleading, as it is adjusted for inflation, causing the numbers to be inflated, of course. However, since the gold price was fixed during the period of the 1920s and the Great Depression, the regular chart doesn’t show very much price movement (see that chart two charts below). Also, for your information, the grey shaded areas on the charts represent recessionary periods. 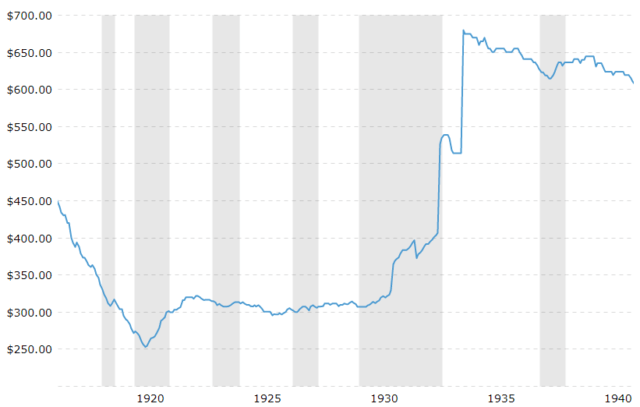 As you can see, the 1920s were relatively calm, followed by a period of deflation (The Great Depression) accompanied by the government raising the price fix from $20.69/oz to $34.69/oz, causing the inflation-adjusted value to go through the roof. I’m not sure we can draw a correlation between gold prices then and now, but take from it what you will.

Contrast that with this chart below. They are the exact same charts, but only the one above is adjusted for inflation. Here, you can clearly see the rise in the government price fix for gold during the early 1930s.

Gold Price Not Adjusted For Inflation 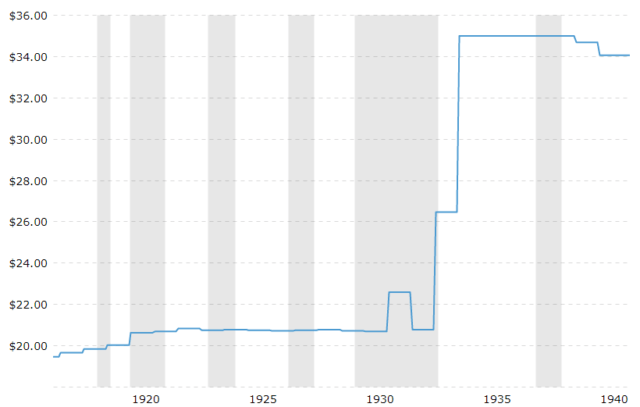 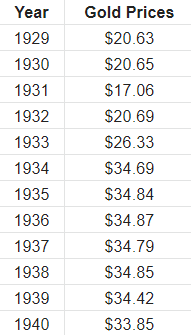 The chart below shows gold prices over the past decade and a half. During the 2008-2009 time period, CPI was flat, and yet, gold rallied from 2008 onward. Gold's rise paused and began to decrease from 2011 through 2014, and then began its ascent from 2015 until today. The Federal Reserve and the US Treasury are issuing debt and printing money like they never have before. Many people see gold continuing its upward trajectory to anywhere between $2,000 to $10,000 per ounce and beyond.

Does this gold chart lay cleanly over the gold prices from the Great Depression era. Yes and no. The price didn't do very much during the 1920s, similar to the 2010s, and now we are ready to potentially explode higher, similar to what happened after 1932. Only time will tell if this thinking is correct. 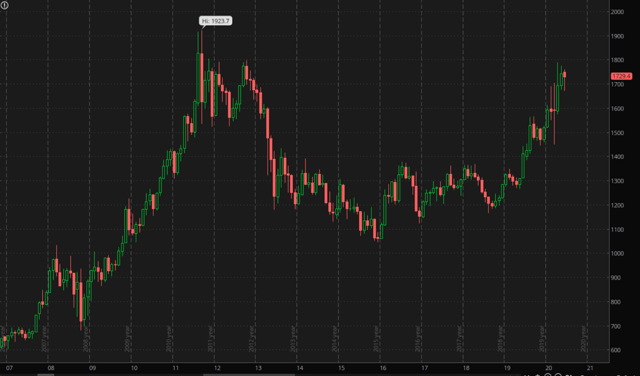 Since the gold price was fixed, and since I’m showing an inflation-adjusted chart, it may also be valuable to examine inflation during these time periods. 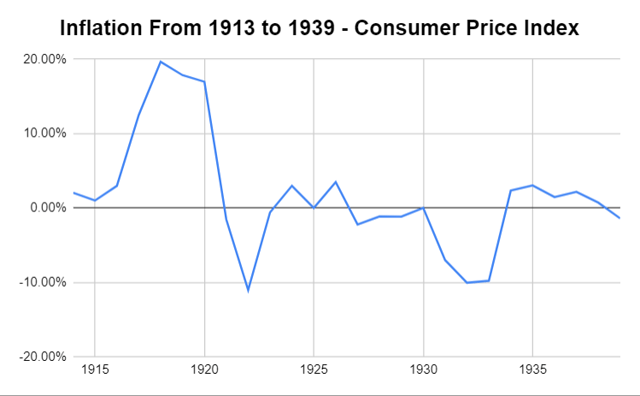 The Government and Gold During The Great Depression

In the time leading up to the Great Depression, people could go to the US Treasury and redeem their paper money directly for gold.

When the Great Depression was beginning, people were exchanging their paper for gold in such extremes that the US Treasury worried they may run out of gold. By law, the Federal Reserve was allowed to issue currency up to the point that it was 40 percent backed by gold. Therefore, as people redeemed their paper money for gold, it had a multiplier effect of reducing the amount of paper currency in circulation. One can imagine that it didn’t take long for the Federal Reserve to be bumping up against its 40 percent gold-backed limit relative to the currency. This caused a form of quantitative tightening or reduction in the money supply.

Therefore, FDR’s solution was to prohibit people from hoarding gold. On April 5, 1933, FDR signed Executive Order 6102 “forbidding the hoarding of gold coin, gold bullion, and gold certificates within the continental United States.” The Treasury offered people a fixed price of $20.67/oz to turn in their gold to the Treasury. The penalty for violation of this executive order was up to a $10,000 fine and/or up to 10 years in prison. After purchasing gold at the price of $20.67/oz from its citizens, the US government raised the fixed price of gold to $35/oz using the Gold Reserve Act on January 30, 1934, in an effort to increase inflation. Gold held by the US Treasury increased by one and a half times from 1930 to 1935 and then doubled again from 1935 to 1940.

By April 1933, when the executive order was signed, the stock market had already been recovering from its low for 9 months. However, as the US Treasury collected gold, this allowed the Federal Reserve to once again issue more currency and monetary expansion could continue.

If we are in a time period that rhymes with the Great Depression from 1929 to 1932, then it should be expected that we will enter a period of severe deflation. In order to stem this deflation, the US Treasury in connection with the Federal Reserve will likely get even more creative than they already have. As long as this is the case, look for there to be continued upward pressure on the gold price. However, hopefully this doesn’t mean the US Treasury will confiscate your gold at a price of their choosing.

Here are some ways to benefit from a rising gold price if you don’t own physical gold. You could buy a general large-cap gold miners ETF, such as the VanEck Vectors Gold Miners ETF (GDX). The GDX holds a basket of the largest public gold mining companies in the world. Or the VanEck Vectors Junior Gold Miners ETF (GDXJ) holds a basket of smaller public gold mining companies if you want a little more volatility and risk.

If you want to own specific gold companies, a gold royalty streaming company can also provide a hedge against inflation while providing diversification among its various income streams. Gold royalty companies operate in different ways, but many help finance a company just starting a mining operation in exchange for royalties from the producing mine down the road. Ely Gold Royalties (OTCQX:ELYGF) is a very small-cap company, but there are other larger royalty streaming companies such as Wheaton Precious Metals (WPM) that will be less volatile.

Then, there is the option of using individual companies such as Kirkland Lake Gold (KL) or Equinox Gold Corp. (EQX). Regardless of how you play it, owning gold is imperative with the monetary policy like we have now.

Brent Hecht
1.17K Followers
This profile focuses on gold mining research.  Although, it should be said that a better version of gold, is Bitcoin.   Bitcoin has better characteristics than gold in every way.
Follow