With QQQ recently passing the $100B in AUM mark, the world's second most traded ETF is showing no signs of letting up.

The past decade has been especially good to the Nasdaq 100, with QQQ outperforming the S&P 500 tracking SPY by an incredible 230%.

Market history suggests we're due for some serious mean reversion sooner rather than later, right?

Ryan McCormack, QQQ Equity Product Strategist at Invesco, joins Let's Talk ETFs to make the case for why the next decade can be just as profitable for QQQ bulls as the last one.

Sign up for Let's Talk ETFs on your favorite podcast platform:

If a picture is worth 1,000 words, then the below chart showing the performance of the Invesco QQQ ETF (QQQ) - the only U.S.-listed ETF to track the Nasdaq 100 index - relative to peers like the SPDR S&P 500 Trust ETF (SPY) and the SPDR DJIA ETF (DIA) must be priceless. The last decade has been nothing short of astounding for the companies that make up the index, with several even delivering returns in the 1,000s of percents. And the performance hasn't been 'front-loaded' into any specific period over the last decade. Going back to all periods longer than one month, the QQQ has handily outperformed peers over all time-frames:

It will be no secret to listeners of this podcast just how long I've been bullish on the QQQ. I wrote about the fund more than a decade ago, back when there was a fourth "Q" in its name. Incredibly, what I wrote about the QQQs back in 2009 still largely rings true today (though I have also become a big believer in Microsoft's (MSFT) "nearly unlimited growth potential" in recent years):

To me, this is what makes QQQQ so appealing: I'd rather have a tech-heavy broad index fund then one with heavy weights in other sectors. Tech is the last thing the U.S. actually still produces. The next largest sector in the QQQQ, Healthcare (15.5%), made this fund even more appealing in the uncertain market environment we've been in due to its status as a traditionally highly recession-proof industry.

As much as the QQQ has been pigeon-holed as a tech and growth heavy index, today's guest, QQQ Equity Product Strategist at Invesco Ryan McCormack, made sure to point out repeatedly that the Nasdaq 100 is so much more. True, in aggregate its holdings outspent S&P 500 components on things like R&D by more than two-to-one over the past decade, which helps explain the much more rapid top line growth they've delivered relative to other major benchmark indexes. Incredibly though, the index's growth characteristics have not been its most powerful ones. A strong command of the numbers at hand, McCormack explains that over the last decade, the Nasdaq 100 has delivered "revenue growth of over 200%, earnings growth of over 300%... and maybe the most staggering statistic of all is dividend growth of nearly 600% over that time period."

So what is the secret to the QQQ's success? It's all about "innovation" according to McCormack - and this isn't limited to the index' tech holdings. He explains that when it comes to listing there versus on the New York Stock Exchange, "the Nasdaq tends to attract companies that are a bit ahead of the curve in terms of adoption of new technologies." This goes well beyond just the FAANG stocks plus Microsoft that the index is most famous for. A look at the QQQ's holdings - several of which we discuss in greater detail during the second half of our conversation - shows companies across sectors and industries that are nearly universally regarded as innovators, whether it be Tesla (TSLA) in the automotive and space exploration vertical, JD.com (JD) in the e-commerce space, Amgen (AMGN) and Gilead Sciences (GILD) in the biopharma sector, or Mondelez International (MDLZ) or Monster Beverage Corp (MNST) in the consumer staples space.

As it was more than a decade ago, the Invesco QQQ ETF remains my core holding in my own and my children's investing accounts. I still believe in American innovation - and more than offering up strong growth or pristine balance sheets - the companies that comprise the QQQ ETF have that in spades.

Disclosure: I am/we are long QQQ. I wrote this article myself, and it expresses my own opinions. I am not receiving compensation for it (other than from Seeking Alpha). I have no business relationship with any company whose stock is mentioned in this article.

Follow Let's Talk ETFs and get email alerts
+
Add a comment
Disagree with this article? Submit your own.
To report a factual error in this article, click here.
Your feedback matters to us! 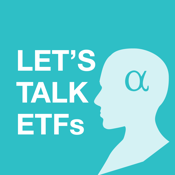