Chesapeake has been stumbling along under its massive debt burden for some time now. There was always the possibility of some Hail Mary pass if the fossil fuel markets leapt of course but the coronavirus has rather put paid to that.

The company just isn't going to survive as it is and as we're being told it's going to file for Chapter 11 imminently.

Chesapeake Energy (NYSE:NASDAQ:CHK) is in the final stages of negotiating a roughly $900M debtor-in-possession loan, as well as "rolling up" some of its existing debt to bring its total DIP financing near $2B, Reuters reports.

It's also attempting to negotiate an equity infusion, and if the company manages to emerge from bankruptcy, creditors that include Franklin Resources (NYSE:BEN) would take over Chesapeake in exchange for eliminating more than $7B of its debt.

A Chapter 11 filing could come as soon as Thursday, but the timing could slip to next week depending on how the negotiations play out.

The first question is whether there's any equity left in there for the stockholders to gain. The answer is no, obviously not. I'm not going to go out and prove that not when others here at Seeking Alpha have already done so. Try here, or this which contains this vital information:

The bond comes with an 11.5% interest payment due in two annual payments of 5.75% each, so this price indicates that the marginal seller of the bonds does not believe he will receive that 5.75% payment due July 1.

It follows from the rules of bankruptcy priority that all the debt junior to the 2nd lien bonds will not be repaid, either. That is to say that the bond prices are telling you that the company will likely default on more than $2.2 billion in secured debt and more than $3 billion in unsecured debt less than one month from now!

A Chesapeake shorn of its debt burden would be an interesting company and no doubt we'll get to considering that once the Chapter 11 is all out the way.

But, as is pointed out, the equity holders only get what is left over once the creditors have all been paid off. And if current bond prices are indicating that even middle ranking creditors are going to get wiped out then really, there's going to be nothing left for equity at all.

I'm actually surprised at the very generous surmise that current equity might end up with 2 to 3% of the debt shorn, post-Chapter 11 version.

Judging by standard valuations the equity has no value.

But that, in our turbulent times, isn't enough. We need to know how the Robinhood guys are going to take this. This isn't, by the way, directed at Robinhood the company (I've done a little writing work for them, don't any more and have no other relationship with them) nor, really, their customers. This is being used as a shorthand for what some think are all the sports gamblers looking for something else to bet upon in this tiresome Covid-19 times. A lot of whom are indeed at Robinhood, thus the name.

We've seen this happen already with Hertz. Bust company, in Chapter 11, no real hope of any recovery for equity, yet the price soars. The thrill seekers having a nice gamble is one possible explanation. The uninformed being suckered is another. And we do have to note that some decent portion will have made good money even as the position as a whole is a loser.

The why of the stock rise is obvious from Robintrack:

(Robinhood holdings in Hertz from Robintrack)

We have to recall that the actual determinant of a stock price is how many people are buying what amount in relation to how many wish to sell what amount. All of our explanations about intrinsic value, cashflows and all the rest are reasons as to why people might want to buy or sell, not the activity itself.

The short term determinant of the Chesapeake stock price is going to be how many people pile in to buy it. We can call them gamblers, we can be English and call them mug punters, but they are the influence. They've also already been the influence: 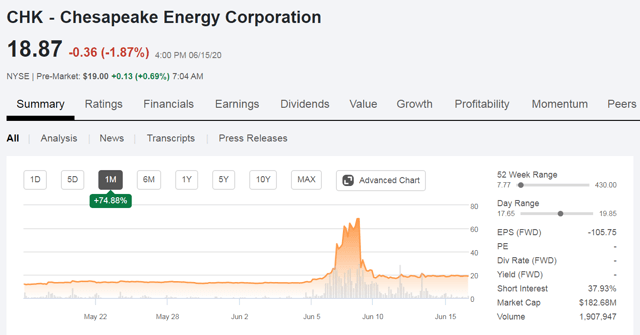 That spike up to $80 is attributed to those gamblers buying in. After all, it used to be worth $500 a share, it's a bargain, right?

There really are enough of them, buying enough stock, to significantly move the market price.

So, what do we think?

We're now getting horribly recursive. Objectively Chesapeake has no value as an equity stock. And yet we've that army out there that we know are going to gamble on it - we know because they already are. So, in order to predict the stock price we've got to predict what that army of gamblers is going to do. Which is difficult, that's a tough task.

We'll also all have different opinions on what they are going to do.

Mine is that there will be buyers at low prices - thinking they're getting a bargain. Even, that people will have looked at Hertz and gone, yes, sure, there's no long term value here but sure, I can ride the wave of other people making the mistake.

Which is, I submit, what we could do. Only as a gamble of course, not with any significant amounts of anything and certainly not regarding it as an investment. But if Chesapeake goes under a dollar I can see another flood of buyers coming in at that "bargain" price.

How to check it?

The answer is, I think, to monitor that Robintrack site. If and as holdings start to tick up then I think it'll become one of those madnesses and delusions that crowds are so prey to, as Charles McKay pointed out a century and a half ago.

The question will be timing and timing only for there really isn't any end value here. And no, there won't be a large enough stock offering to make the creditors whole either, the hole is billions large.

The determinant of the Chesapeake stock price is the behaviour of the Robinhood and the like gamblers. To profit from it requires predicting what they will do.

My prediction is that I don't know enough to be able to recommend a short. I'd not want to get caught on the wrong end of a wave of irrational buying. On the other hand if the price collapses, as it should, I can see a wave of that irrational buying and being in front of it would be profitable.

But note this is gambling. Akin to poker more than anything else, where we're looking for the tell of what the other person is doing and it's certainly not investment.