Value investors often shy away from major eCommerce players like Amazon (AMZN), Shopify (SHOP), and several others due to their high valuations. In my search for companies that would indirectly benefit from the eCommerce boom, I came across Air Transport Services Group (NASDAQ:ATSG). This article outlines the opportunities in ATSG for the long-term investor.

ATSG is the world's largest lessor of freighter aircraft and operates through multiple subsidiaries. 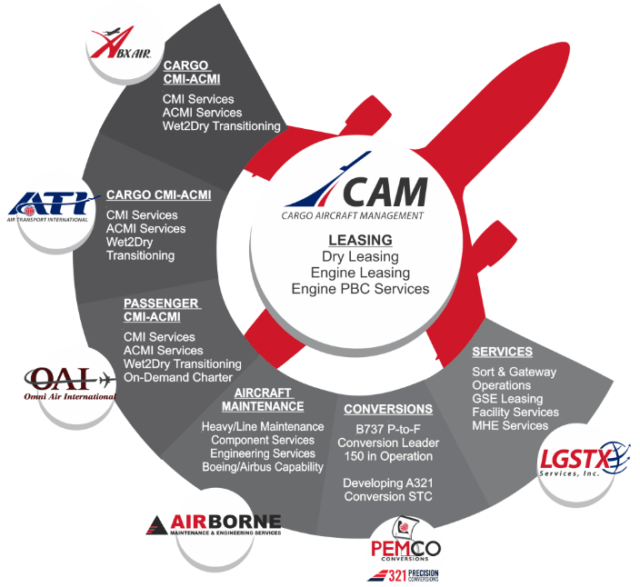 ATSG recently announced an agreement to lease 12 additional Boeing (BA) 767-300 converted freighter aircraft to Amazon. All 12 will be leased to Amazon for 10 years, with options for Amazon to extend the leases for three additional years. 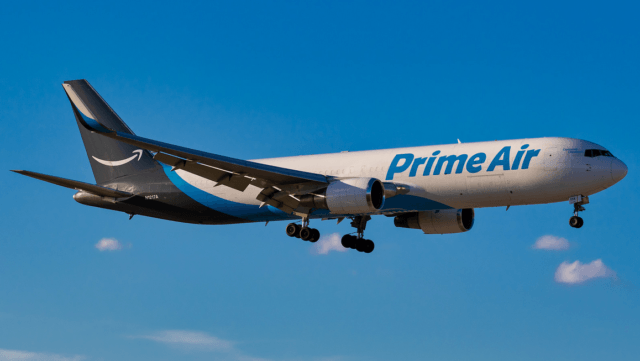 Amazon's current flight network appears designed largely to augment the services of DHL International (OTCPK:DPSGY), FedEx (FDX), and UPS (UPS), such as by filling critical links between its fulfillment and sorting centers, rather than being designed to replace them outright. 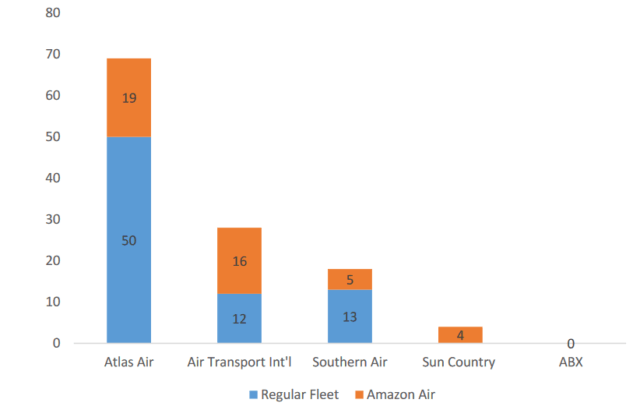 Considering the fact that Amazon has made deals with ATSG (and AAWW previously) for long-term leases in exchange for warrants to acquire a third of these companies, it is fair to assume that Amazon wants to significantly expand its current cargo operations. DePaul University research projects Amazon Air to operate around 70 flights by 2021 and has 200 aircraft in the roadmap for 2028. I think recent expansion of the relationship with ATSG (and corresponding warrants for Amazon to acquire up to 40% of the company) outlines strong potential for ATSG to grow with Amazon.

Details about the warrants

In conjunction with Amazon's commitment for ten additional 767 aircraft leases, extensions of twenty existing Boeing 767 aircraft leases and the ATSA described above, Amazon was issued warrants for 14.8 million common shares which could expand its potential ownership in the Company to approximately 33.2%, including the warrants described above under the 2016 agreements. Warrants for 11.1 million of these common shares vested as existing leases were extended and six additional aircraft leases were executed and added to the ATSA operations. Additional warrants will vest as four additional aircraft leases are executed, which is expected to occur in 2020. These warrants will expire if not exercised within seven years from their issuance date. They have an exercise price of $21.53 per share, based on the volume-weighted average price of the Company's shares over the 30 trading days' immediately preceding execution of a non-binding term sheet by the parties on October 29, 2018.

Additionally, Amazon can earn incremental warrant rights, increasing its potential ownership from 33.2% up to approximately 39.9% of the Company, by leasing up to seventeen more cargo aircraft from the Company before January 2026. The exercise price of incremental warrants related to future aircraft leases will be based on the volume-weighted average price of ATSG's shares during the 30 trading days immediately preceding the contractual commitment for each lease.

While there is significant growth potential for ATSG, considering up to 40% of the company can be acquired at $21.53 per share, there are fears it may weigh down on the stock price. However, warrants are tools employed by many companies to make deals, without diluting its shareholders. It is important to remember that similar warrants were in play with Warren Buffett and Bank of America (BAC) during the 2008 financial crisis, but long-term shareholders were rewarded well despite lower strike price for the warrants. 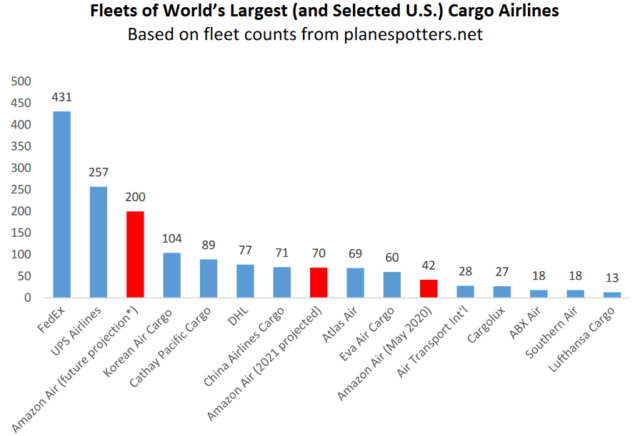 When measured on the basis of the available lift (cargo carrying capacity) of its planes, Amazon Air has a lower ranking among cargo airlines. At present, Boeing 767s account for about 90% of its flights, with the remainder being Boeing 737s, both of which have less cargo-carrying capacity than the B747s, MD11s, A300s, and other large jets commonly used by other cargo airlines.

Amazon's air network is decentralized and not designed to ensure nationwide next-day delivery, as FedEx and UPS systems do. Instead, Amazon air stations are located at secondary, cargo-friendly airports near major warehouses and within a day's truck drive of fulfillment centers.

AWS was created by Amazon for their internal use. It was later streamlined and offered as a service to other businesses with similar needs. If Amazon gets closer to the 200 aircraft fleet, my guess is that they would offer some form of shipping-as-a-service to other businesses and offset some of their operating expenses as well as improve utilization of their leased fleet.

Many of the world's biggest cargo airlines, such as FedEx, UPS, DHL, and more, operate an incredibly old fleet of aircraft. Here are some examples of average age of the fleet:

Older aircraft are cheaper to buy. Less capital expenditure allows the carrier to expand the cargo fleet faster. Lower cost of the plane makes the cargo carriers not mind spending more maintaining them.

Every cargo carrier would love to have a fleet of fuel-saving newer planes like the Boeing 787s to fly cargo flights. But they are expensive to buy, the queue is long and newer aircraft have too many extra bells and whistles that cargo airlines just don't need.

With the average age of the 757s approaching 30 years, they may be nearing the end of life soon. Thus, I see a huge opportunity ahead to replace the aging cargo fleet of Boeing 757s with A321s. Converted A321s for use as freighters is a new market altogether, and ATSG is an early player in the big market.

The A321P2F programme is now taking off in the market. The aircraft will be the most capable freighter in its class and also the most environmentally friendly. Our Global Market Forecast predicts that around 1,000 small freighter conversions will be required over the next 20 years to replace ageing fleets and cater for growth. This makes for a solid market potential for the A321P2F

FedEx announced plans to execute the phased retirement of 29 old aircraft by FY22 as a cost-cutting measure. In my opinion, UPS, DHL, as well as airlines operating cargo flights will pursue similar steps to add more fuel-efficient aircraft to their fleet. 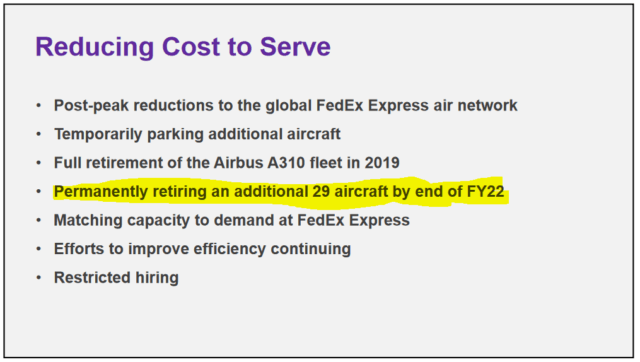 Popular commercial-jet models have shed between 5% and 15% of their market value compared with the beginning of the year. The International Air Transport Association (IATA) already calls COVID-19 "the biggest crisis that the industry has ever faced" and expects demand for flights to fall 38% this year.

Airlines are now getting rid of older, less fuel-efficient models. American Airlines (AAL) has said it would retire its Boeing 757 and 767 fleets, as will KLM (OTC:KLMR) with the 747.

ATSG, through its leasing and airline subsidiaries, is the world's largest owner and operator of converted Boeing 767 freighter aircraft (source). 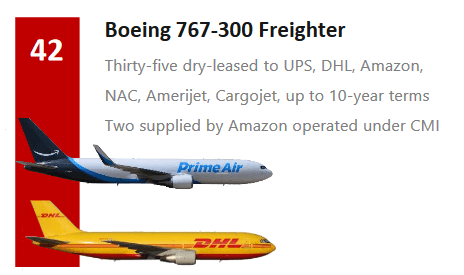 With commercial airliners choosing to retire much of their 767 fleet, it presents an opportunity for ATSG to procure these aircraft cheap and convert them for freighter operations. The company has successfully procured aircraft in this manner in the recent past. In my opinion, ATSG may be able to easily and cost effectively procure and lease the 12 Boeing 767-300 converted freighter aircraft to Amazon.

ATSG has a higher CAGR revenue growth since 2015 when compared with Atlas Air. 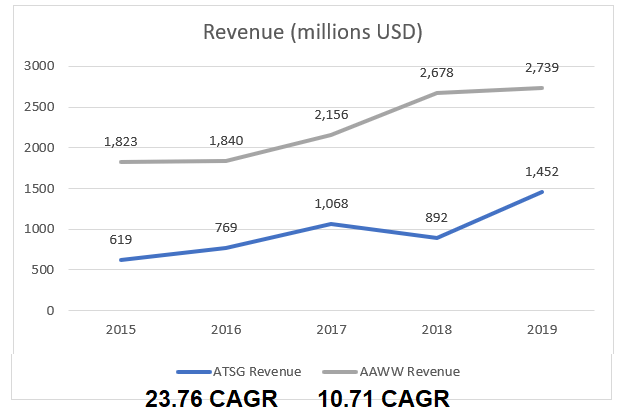 Looking into the balance sheet, ATSG has lower debt to market cap in comparison with AAWW. 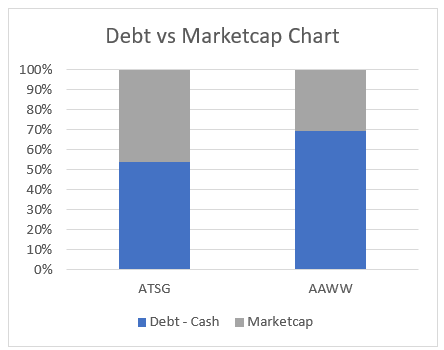 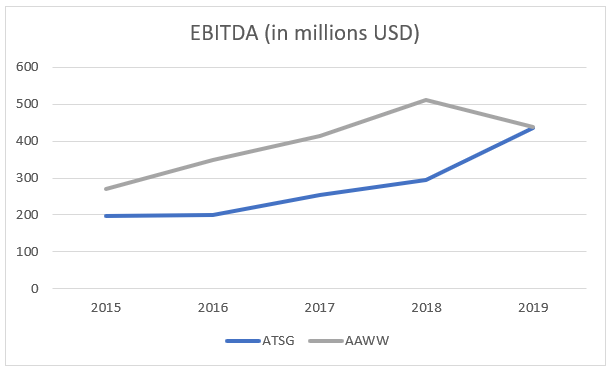 I made some projections with the following assumptions: 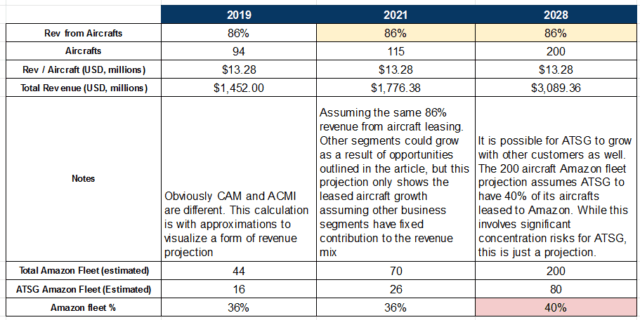 Based on rough projections with the data provided, ATSG revenue could hit at least $3 Billion by 2028, reflecting a 10.45% CAGR.

In my opinion, ATSG and AAWW are likely to offer better growth prospects to investors due to the fact that every aircraft added to the fleet will improve the company's top line significantly. This isn't true for the large-cap cargo players, which meet Peter Lynch's definition of slow-grower. Looking at the figures, ATSG is undervalued when compared with AAWW. 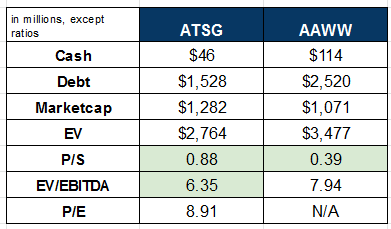 ATSG does have revenue concentration risks, and the growing relationship with Amazon does not make things better from that risk standpoint. ATSG's customer base is to a fair extent, a reliable set of companies/organizations whose downfall and downsizing will be very obviously seen. Longer term contracts help mitigate that risk to a certain extent though ATSG is noted to be quite flexible with Amazon, despite the term lease agreements. In my opinion, Amazon's aircraft needs are more probable to grow than reduce. 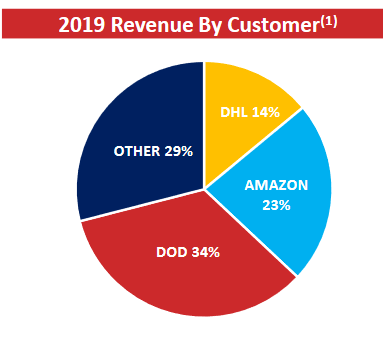 I believe ATSG is a value bet on the growth of eCommerce. Aging 757 aircraft needing replacements and reduced price of older passenger aircraft (757 and A321) are catalysts for the growth of ATSG's leasing and aircraft conversion business segments. Expanding the relationship with Amazon is the momentum needed to power the company forward. I recommend ATSG to long-term investors.

Hidden Opportunities
2.58K Followers
Venkat Raghavan is a management consultant and individual investor with experience providing transformation assistance to finance, healthcare and manufacturing industries. With a strong background in helping transform organizations and streamline their business, investing is a passion for the author, and he enjoys identifying undiscovered opportunities and sharing insights. The author aims to focus on companies with great potential that aren't under the spotlight.The author occasionally contributes articles to Rida Morwa's service High Dividend Opportunities.

Disclosure: I am/we are long ATSG. I wrote this article myself, and it expresses my own opinions. I am not receiving compensation for it (other than from Seeking Alpha). I have no business relationship with any company whose stock is mentioned in this article.