We read transcripts of earnings calls each week and one key theme we have picked up in the last few weeks is the cloud. Several companies keep insisting on how they have been pushed to do more in the cloud. We explore this and more in this week's edition Takeaways from Earnings Calls.

While the cloud was already expected to be a booming business in the next decade or so, the expectation was for steady growth. What has happened in this pandemic though is that most companies have been forced to move their businesses to the cloud at a rate much faster than normal. This has resulted in high levels of traffic as adoption rates skyrocket. Let us start with Adobe (ADBE) and AMD (AMD) who saw historic levels of traffic and interest in the cloud:

In Q2, we saw historic highs in adobe.com traffic across both Creative Cloud and Document Cloud. Demand for our professional video products was particularly high with strong engagement for Adobe Premiere Pro and After Effects. We continue to see steady growth from social content creators using Premiere Rush, which saw a 75% increase in monthly active users quarter-over-quarter.

We have seen several cloud providers accelerate infrastructure deployment to address rising demand from the growing number of users working and schooling from home. In fact, one of our large cloud customers even deployed 10,000 second-generation EPYC servers in less than 10 days to support the surge in demand for their collaboration services - Advanced Micro Devices (AMD) CFO Devinder Kumar

Now, the conversations that I have, have really shifted, and almost every single CFO that I talk to says that they absolutely are going to move financials to the cloud, it's just a matter of when, and every company is drawing their own decision about when the right move is. And I think that finally we have enough other systems in the cloud, like CRM, which was really the trailblazer here, HCM. They now understand that it's not higher risk, in fact it's lower risk, right. Leave the datacenter operations to the people like us who do it for a living and are really, really good at it. They understand the benefits that they're going to get from continuous innovation, from updates with almost no downtime, right, and those are value propositions that really resonate with them, having real-time data, having machine learning embedded in their system to make them more efficient - Workday CFO Robynne Sisco

Essentially, COVID-19 has become a good excuse for companies to implement unprecedented levels of change in systems and to move digital:

companies that have had significant changes to their businesses, since they put those systems in 20, 25 years ago whether it be a lot of M&A, whether it be changing business models like they found that their on-prem systems really had prevented them from effecting the changes to their business that they needed to make and that their back office systems were no longer supporting them. - Workday CFO Robynne Sisco

I must say that for me, this is a Supernova moment. This is a particular moment where overnight our business models have changed. Every business model has become a virtual model. In fact, as compared to what Tom Friedman said in 2007 when he defined Supernova, I think what we are undergoing is 2 times of the Supernova, because this is a pandemic that is happening at the same time across the world.”- Keshav Murugesh Group CEO Christine Ta

“there are in fact, some significant changes that I think we’ve all gone through, but certainly our consumer and corporate clients have been experiencing. I think the biggest and clearest takeaway or change that I’ve seen would have to be characterized as a very, very swift shift towards digitization.” – Citigroup (C) CFO Mark Mason

The thinking here is that even though the cloud has experienced increased uptake so far, there is still further room for growth as even laggards adapt to this shift. We would advise taking more positions in cloud providers and such companies that would benefit from this move like Advanced Micro Devices: 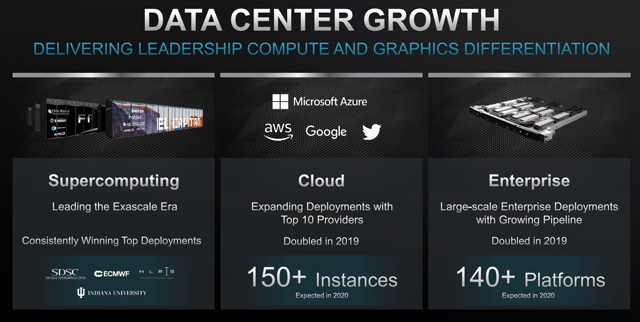 A boom in E-signatures

Another area that is experiencing a boom is e-signatures. I signed a contract to work as an intern this summer and most of our negotiations were all done online. Even the contract signing was done via e-signatures. There has been increased adoption of e-signatures as companies try to avoid contact as much as possible. Here is Adobe speaking on this trend:

Companies are adopting e-signatures rapidly. For perspective, below are revenues for and billings for DocuSign (DOCU), an e-signatures provider, in Q1 2020 showing a rise in billings and revenues of 59% and 39% respectively. Note that the total number of enterprise and commercial customers joining their customer base was up 49% in Q1 2020: 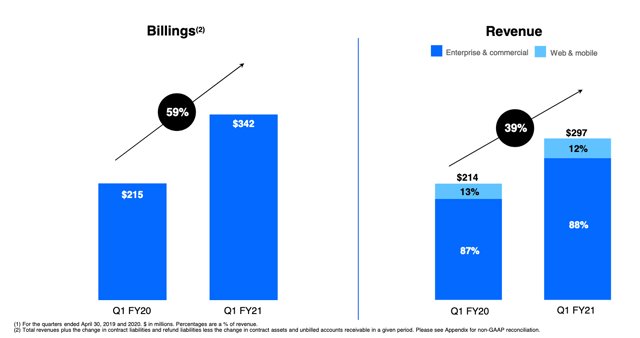 Looking ahead, one would expect this trend to continue as companies try to reduce both paperwork (as ESG concerns mount) and human interactions (doing away with paper-based agreement processes).

Discretionary spending is down

And as a result of the significant liquidity that our clients have raised, we have not only seen a decline in the pace of new draw downs, but we've also seen some repayments on prior draws on credit loans. And so, frankly, should the capital markets and the overall environment remain constructive. We would expect that draws as well as new loan demands will continue to moderate, moderate further. So, it's an interesting dynamic where we're seeing those draws start to abate, but more importantly pay downs given liquidity in the market and new loan volumes abate as well - Citigroup (C) CFO Mark Mason

the fact that debit is outperforming credit is not surprising. People tend to want to use the money they have in times like this versus money that they might be borrowing, plus we’ve seen the spend mix shift away from more discretionary items where credit is often used or preferred by consumers. And then you add in the fact that most of the government stimulus funds were deposited into checking accounts, where people use their debit card to spend those money. So you know debit continues to outperform credit by a fair bit, and not totally surprising” – Visa President Ryan Ryan McInerney

demand for borrowing in the credit card space is very low, very weak right now, which is exactly what you’d expect because it you know, it sits in parallel with consumer spending on credit cards. So, you know, people have pulled back and credit card is very low demand..Demand for credit in credit card shrinks dramatically in recessionary times” – JPMorgan Chase Consumer Bank CEO Gordon Smith 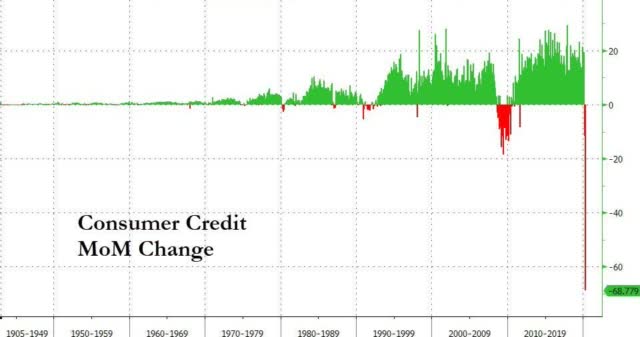 As recession fears and COVID-19 persist, it seems that consumer credit will keep being affected. Our advice: Avoid companies dependent on consumer credit.

Our key takeaways this past week was that we see a surge in cloud adoption and e-signatures that is expected to persist. Consider adding to companies exposed to these sectors. We also see consumer credit shrinking as debt holds steady or rises. See you next week!

Erick Mokaya, CFA
363 Followers
I research and write about good companies with solid fundamentals, a potential for growth, and the ability to generate healthy returns. I am also the author of the Transcript, a weekly capital markets newsletter focusing on earnings calls (https://thetranscript.substack.com/).
Follow

Disclosure: I am/we are long AMD. I wrote this article myself, and it expresses my own opinions. I am not receiving compensation for it (other than from Seeking Alpha). I have no business relationship with any company whose stock is mentioned in this article.