We should talk first about that credit freeze-up that destroyed so many portfolios. In most bear cycles, a rush out of equities is accompanied, at least in part, by an addition to income holdings. These have most often been the less risky way to wait out a bear cycle – until 2020.

The Great Income Debacle began on March 9 with the bottoming of the U.S. 10-year Treasury yield. That bottoming accelerated as investors large and small rushed to sell their income mutual funds and ETFs and raced instead to buy Treasuries. The Fed did nothing during this early period.

As the next few days continued this exodus from any income fund that was not in 100% Treasuries, these ETFs and some traditional funds had to honor their obligations by paying the redeemers. I say “some” traditional funds because, unlike ETFs, the traditional fund portfolio managers might have kept x percent of their portfolios in cash equivalents like… Treasuries. If they did, their basic portfolio of other holdings went down but then rebounded without the managers having to sell their holdings at fire sale prices.

Such was not the fate for many income ETFs. With a charter to stay close to fully invested, they continued to have to sell off pieces of their portfolio at lower and lower prices until finally the day came when the ETF portfolio managers instructed their traders to sell more holdings. This time the traders came back and said “there are no bids.”

“No bids? That is insane!” responded these portfolio managers. “There have to be bids at some price.”

In fact, the trades spoke the truth. No secondary market firm or market maker wanted any more debt of any company. They were now filled to the brim and prices were still going down.

This situation resulted in the entire mutual fund, ETF and brokerage community pounding at the doors of the Fed and the Treasury on behalf of their clients. The situation was finally tempered by the "better late than never" response by the Fed and Treasury. And what a response it was.

By this time, March 23, almost all fixed income funds, and especially the mortgage funds, were on the edge of a cliff. Even the best of these, like my old favorite AlphaCentric Income Opportunities Fund (IOFAX), a rock-steady income stalwart if ever there was one, was ready to stop redemptions. Its excellent management had seen the fund increase in value from its inception on June 1, 2015. at $10 to its price on March 9, 2020, of $13.23. (All the while paying out a solid monthly 5%-plus annualized dividend.) 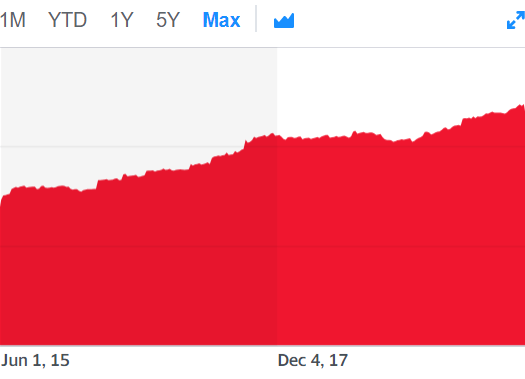 Now take a look at this chart, beginning the next day, March 10: 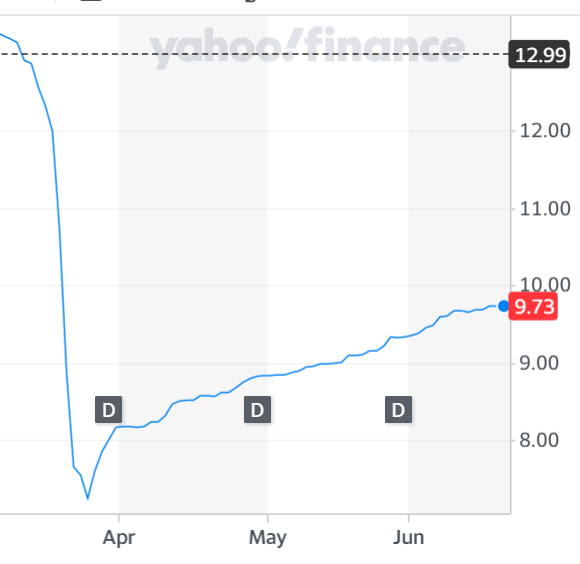 The shares fell from $13.19 to $7.24 during the next two weeks (even though it never missed a dividend, before or since).

The Fed initially pledged to buy as much government-backed debt as needed to bolster the markets for housing and Treasury bonds. It then announced that it would buy corporate bonds, including the riskiest investment-grade debt, for the first time in its history. Non-investment-grade paper (like unrated mortgage securities which might be AAA or CCC if rated) were not included in the Fed’s early rescue plans.

It took the Fed awhile to include mortgage bonds but when they did, of course, a quality firm like IOFAX turned on a dime. I don’t believe it has had a down day since as it resumes its winning ways.

My point in including this egregious example is to point out (and perhaps partially salve the wounds of) those investors nearing or in retirement who tried to do what their financial planners and market experts thought, based upon previous bear cycles, was the right thing to do: Make fixed income an increasing percentage of your portfolio as you got older. In short, the more conservative you were in this strangest of all bear cycles, the more you were harmed.

So where do you go from here? 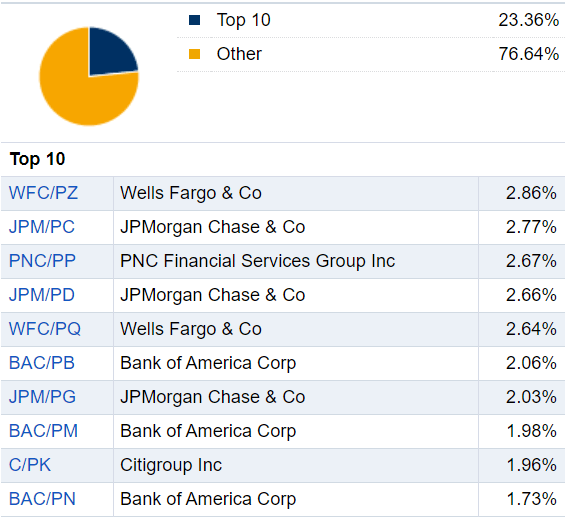 Here are the next 15 holdings: 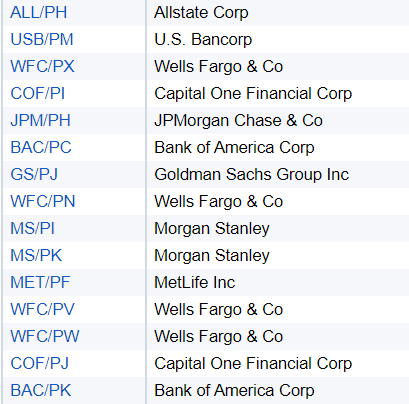 What makes these holdings, and therefore PGF, different is that a large percentage of them are not the same $25 or $50 par preferreds that you and I might normally purchase. You might better think of these as preferred bonds in one sense. They are paid after all bondholders are paid in the event of a bankruptcy, so they are definitely lower in the food chain, but the greatest number of these are issued with a $1,000 par value. That makes them less likely to be owned by individuals and more likely to be owned by institutions.

Placing $100,000 with one issuer just to own 100 shares of one of these might not be prudent for thee and me. However, for a Prudential (PRU) or a Berkshire Hathaway (BRK.A) (BRK.B), it would be ideal. This may be one reason why, unlike the chart of IOFAX above, which shows a slow but steady rebound, here's what PGF’s rebound from mid-March looked like: 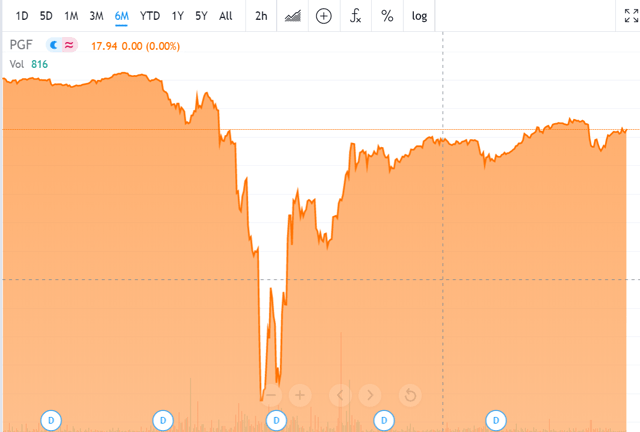 Like IOFAX, PGF never missed a dividend. Unlike IOFAX, PGF hit its low of about 13 on March 18 and less than a week later it already was back to 17! Once the institutional buyers realized the Fed was going to backstop any bond issued by such credit-worthy borrowers as JPMorgan Chase (JPM), Allstate (ALL), and MetLife (MET), they decided the preferreds were going to be safe as well.

If you blinked, you almost missed the recovery in PGF. But you can still benefit. The Fed backstop is firmly in place. Even if the Treasury and Fed, working hand in glove, decide at some point to remove some of the goodies and dollars they are dispensing, it's likely that they will continue to buy the paper and backstop the offerings of the largest financial sector companies in the world.

Full disclosure, I have done just that. I originally purchased 1,000 shares of PGF in my Marketplace Investors Edge Growth & Value Portfolio on Jan. 23, 2019. (That was the same day I wrote my previous article about PGF on Seeking Alpha.) I did not even consider selling PGF when it declined in March. (But I was too distracted by all the other noise to buy more when it was selling at 13 during The Great Income Debacle, darn it!)

I think PGF, right now, given the helicopter money flowing from the skies above Washington, D.C., is among the safest holdings in my portfolio. I cannot retire on the income from Treasury Bills, Notes or Bonds. After inflation and taxes, they would leave me with a negative return. I do not mind using Treasury ETFs for between-investment monies, but I also need some investments I view as “almost” as safe, but which pay a higher dividend or interest.

Invesco Financial Preferred – PGF – does just that. At its current price, the 95 cent per annum dividend (paid monthly) provides a yield of 5.25%.

The net expense ratio is 0.62%. The shares have enough volume (about 745,000 shares per day over the past 90 days) to keep the bid/ask spread nice and tight should you need to sell in a hurry. Its beta to the stock markets is a reasonable 0.68. Finally, it holds about $1.5 billion in portfolio assets.

Another reason I choose to buy financial preferreds via old friend PGF is that, while all preferreds are less liquid (especially during a panic) the big banks and brokerage titans have a ready outlet for selling that you and I don’t have: They have a captive audience of clients. If they cannot trade their own bonds among themselves and other institutions like pension funds and ETFs, they always can recommend them (with the appropriate caveat, of course) to their own bank/brokerage clients.

There's a reason why the SEC, after the deluge from October 2007 to March 2009, did not fight the idea of banks and brokerages merging into one entity. Mssrs. Glass and Steagall would be rolling over in their graves.

PGF is a core holding for me. I suggest you do your own due diligence and see if you might agree. 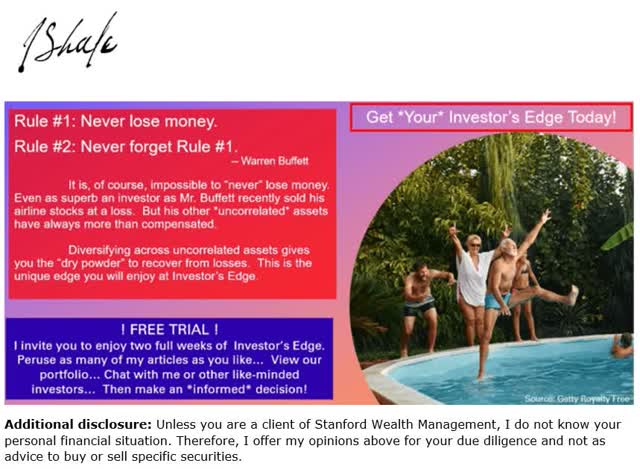 Geopolitical analyst, speaker, writer. Former professor, retired Brigadier General, Special Ops and Intelligence. I invest for myself and the world's best clients. You are welcome to join us.

Published or reviewed Wall Street Journal, Strategic Review, American Thinker, Forbes, others. I write for my own pleasure and your feedback on SA, my SA blog and on SA Marketplace site, The Investor's Edge. Author of the investment book "Bringing Home the Gold." I also write geopolitical commentary at "On Point -- National and Global Issues and Intrigues." You can see these essays gratis at https://josephlshaefer.substack.com/.

Disclosure: I am/we are long PGF. I wrote this article myself, and it expresses my own opinions. I am not receiving compensation for it (other than from Seeking Alpha). I have no business relationship with any company whose stock is mentioned in this article.