I think we can all agree that the key driver to the stock market is the expectations/hope for the economic recovery.

Last week, we got a slew of data.

Some of which was surprisingly good!

I think we can all agree that the key driver to the stock market game these days is the expectation/hope for the economy to recover. To be sure, this is no ordinary recovery. Because this is definitely not your ordinary, garden variety recession.

Never before had we seen the stock market go from an all-time high to a decline of more than 30% in such a short period of time. And never before have investors enjoyed a rebound as fast and as furious as the rally that began on March 24, 2020.

In short, we are experiencing unprecedented times. As such, a big question facing everyone in the game is, where do we go from here?

Which brings me back to the first line of this morning's market missive... To the state of the recovery. For some time now, many investors, including some very wealthy and very big-name pros have been "humbled" by the stock market's eye-popping rebound. You see, the joyride to the upside didn't seem to jive with what was happening in the "real world."

However, the market is known for its ability to "sniff out" changes in the environment BEFORE they are obvious. And from my seat, while it is still a little hard to believe, this is exactly what the market appears to have been doing. As in "sniffing out" some surprisingly good stuff that is happening in the economy.

So, this week I'd like to share some charts that help illustrate the current state of the economic recovery. I found some of the charts to be very surprising. And others, well, not so much. But I think the charts tell an interesting story. So, let's take a look.

First up is June's Empire State General Business Conditions Index, which jumped a record 48.3 points to a reading of -0.2. There are a couple of surprises here. First, is the fact that the consensus expectations were for a reading of -35.0 ("missed it by that much!"). And second is fact that at -0.2, the index is just a whisker away from expansion territory. The only word I have for this chart is, wow. 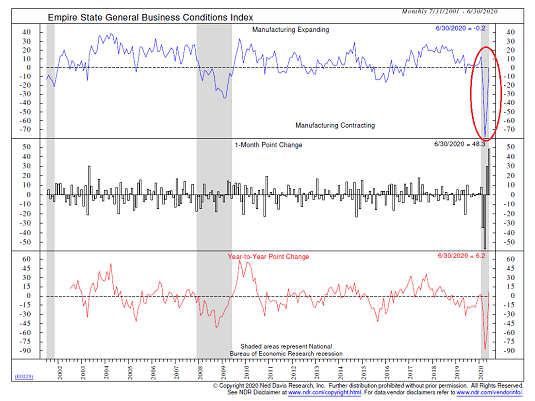 Perhaps even more impressive was the surge seen in optimism, as the Empire Manufacturing Expectations Index jumped 27.4 points to 56.5 - its highest level since October 2009. This suggests that manufacturers in the region expect activity to recover quickly in the next six months. Again, the word you are looking for is, WOW!

Next up is a chart of mortgage applications for single family home purchases. While it makes sense that some folks would want to move out to the burbs in this coronavirus world we now live in, I certainly didn't expect to see home purchases improve this much, this fast. Currently, home purchases are up 21% on a year-over-year basis. Impressive. And more than a little surprising. 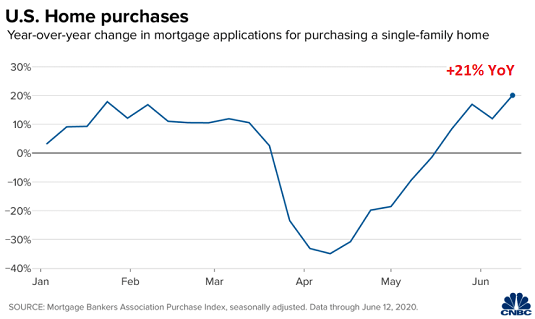 Also surprising is the level of credit card expenditures. The chart below shows that general merchandise purchases made via credit cards is up more than 20% over the past year. This is despite the fact that it's been a lot tougher to buy stuff as compared to a year ago. I guess you just can't keep the good 'ol American consumer from shopping. 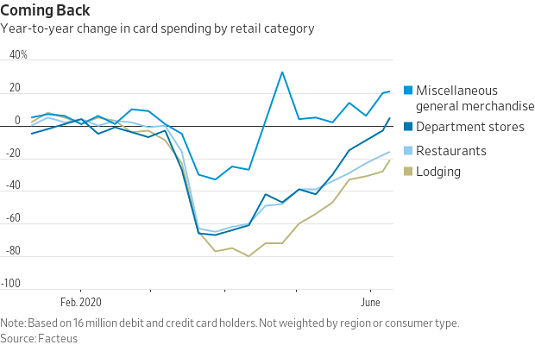 And finally, I found it surprising that hotel occupancy is as high as it is. Sure, 42% isn't great. But compared to the levels seen before we were told to stay home, the current level is, well, a bit surprising. 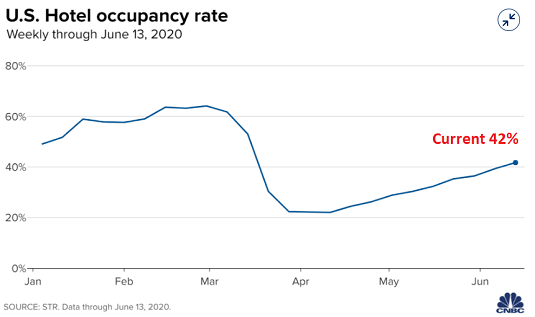 Now let's move on to the charts from last week that were more or less in line with what you might expect...

First up in the not-a-surprise category is the level of restaurant bookings. Okay, to be honest, the -60% reading is a little higher than I would have expected. However, being down 60% from this time last year isn't all that surprising - and must be rough for those smaller restaurant owners. 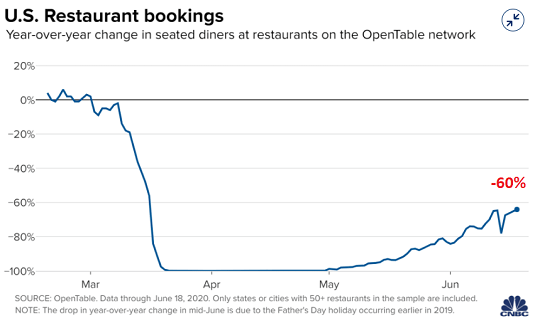 Also not surprising is the 80% decline seen in air travel when compared to year-ago levels. I do know a few folks that have been on airplanes recently and they said the experience was actually pretty good. However, I think most people are of the mind that unless air travel is absolutely necessary, they aren't going to be flying until there is a vaccine for COVID-19. 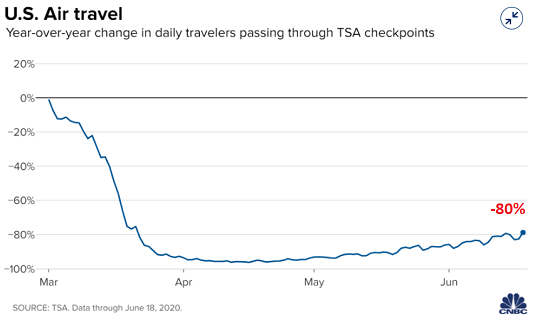 And finally, this week's report on Industrial Production was not terribly surprising. Sure, the percentage rebound was impressive. However, the absolute level remains down near the depths of the Great Recession of 2008. 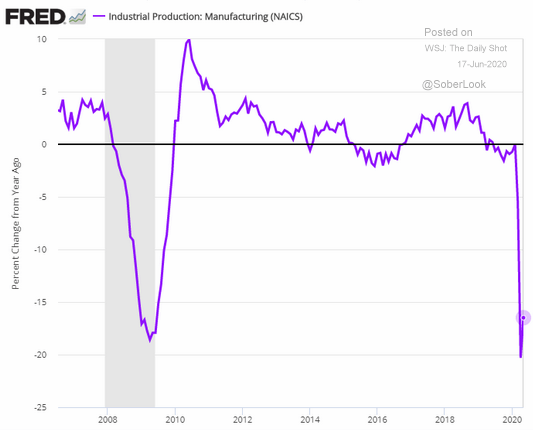 So, there you have it. There were definitely some positive surprises in last week's batch of data. And also, some confirmation that a healthy chunk of the economy isn't in great shape.

So, with stocks knocking on the door of breakeven for the year, we will likely need to see a lot more positive surprises in order for the bulls to continue their impressive run.

Each week we do a disciplined, deep dive into our key market indicators and models. The overall goal of this exercise is to (A) remove emotion from the investment process, (B) stay "in tune" with the primary market cycles, and (C) remain cognizant of the risk/reward environment.

We start with six of our favorite long-term market models. These models are designed to help determine the "state" of the overall market.

There is one change to report on the Primary Cycle board this week. The current "signal" from my so-called "Desert Island Model" improved from "hold" to "buy." So, with four of the six models now sporting buy signals and the hypothetical historical return of the market given the current state of models above the mean return since 1980, the weight of the evidence leans bullish from a big-picture standpoint. However, this does not mean that pullbacks/corrections won't occur within the context of the current cyclical bull market. 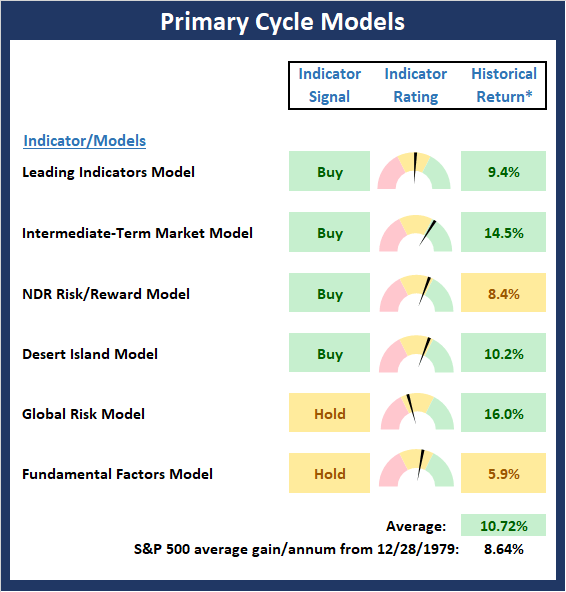 * Source: Ned Davis Research (NDR) as of the date of publication. Historical returns are hypothetical average annual performances calculated by NDR. Past performances do not guarantee future results or profitability - NOT INDIVIDUAL INVESTMENT ADVICE. View My Favorite Market Models Online

The State of the Fundamental Backdrop

Next, we review the market's fundamental factors in the areas of interest rates, the economy, inflation, and valuations.

There are no changes to the Fundamental Factors board this week. However, as I've been saying in this space for some time now, we must take the Fundamental board's readings with a grain of salt due to the speed with which economic activity was temporary halted. 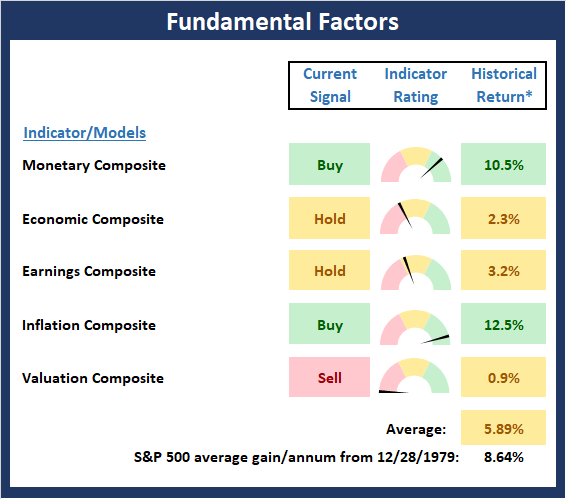 * Source: Ned Davis Research (NDR) as of the date of publication. Historical returns are hypothetical average annual performances calculated by NDR. Past performances do not guarantee future results or profitability - NOT INDIVIDUAL INVESTMENT ADVICE. View Fundamental Indicator Board Online

The State of the Trend

After looking at the big-picture models and the fundamental backdrop, I like to look at the state of the trend. This board of indicators is designed to tell us about the overall technical health of the current trend.

The trend board perked up nicely last week as three components improved. It is worth noting that our "regime" indicators now suggest the market is in a "trending" mode. Historically this has meant that pullbacks tend to be shorter and shallower. As such, the bulls deserve the benefit of any doubt here. 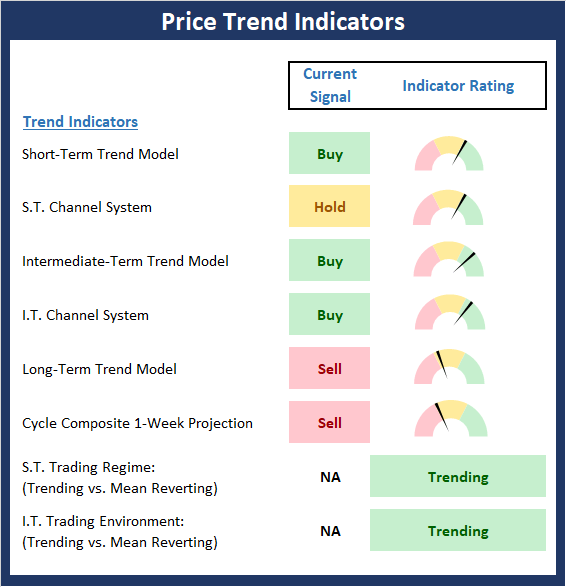 The State of Internal Momentum

Next, we analyze the "oomph" behind the current trend via our group of market momentum indicators/models.

The Momentum Board gave up a little ground again last week. However, on balance, the board remains positive and leans bullish. 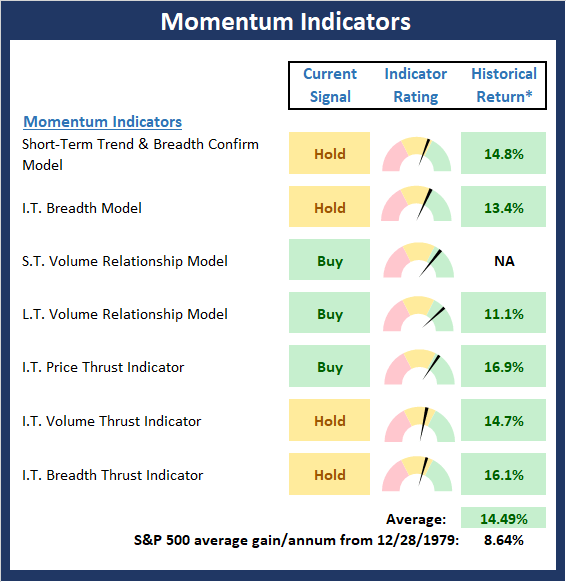 * Source: Ned Davis Research (NDR) as of the date of publication. Historical returns are hypothetical average annual performances calculated by NDR. Past performances do not guarantee future results or profitability - NOT INDIVIDUAL INVESTMENT ADVICE. View Momentum Indicator Board Online

Once we have identified the current environment, the state of the trend, and the degree of momentum behind the move, we then review the potential for a counter-trend move to begin. This batch of indicators is designed to suggest when the table is set for the trend to "go the other way."

The Early Warning board is now in what I like to call neverland. This means that neither team has a clear edge at the present time. Thus, the current consolidation phase could easily continue for a while longer. 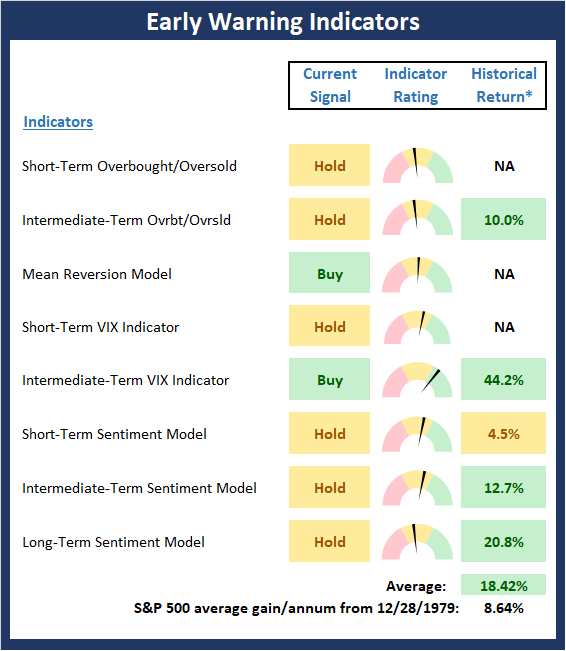 * Source: Ned Davis Research (NDR) as of the date of publication. Historical returns are hypothetical average annual performances calculated by NDR. Past performances do not guarantee future results or profitability - NOT INDIVIDUAL INVESTMENT ADVICE. View Early Warning Indicator Board Online

It's how you think that makes you successful. If you have a positive attitude, good things will happen. -Tom Landry

Follow David Moenning and get email alerts
+
Add a comment
Disagree with this article? Submit your own.
To report a factual error in this article, click here.
Your feedback matters to us!