Bristol Myers Squibb (NYSE:BMY) is one of the world's largest pharmaceutical companies, with a current market cap of about $123 billion and annual sales running over $40 billion. It generates strong cash flow from operations and pays a substantial dividend, currently $0.45 per quarter or $1.80 per year, which works out to about 3.2% per year, depending on the exact price paid for a share. As much as I like the dividend, I believe the stock is undervalued because of its extensive drug candidate pipeline, strong sales growth of newer drugs, and ability to use cash to acquire cutting-edge drug candidates or the companies that discover them.

I believe there are two main reasons Bristol is currently undervalued. One is that biotechnology investors are currently chasing COVID-19 related stocks. There is nothing wrong with that. The other is that sales of some of Bristol's older drugs are declining or will soon see generic or biosimilar competition. I will take a pass on the first issue, which should normalize over time. This article will address the second issue, but will then focus on the potential of the pipeline, including the components acquired with Celgene.

Every pharmaceutical company that is in business long enough will see each of its commercial drugs become subject to generic or biosimilar competition. When investors and analysts do not project enough revenue growth of newer drugs, or potential from pipeline drugs, the foreseen drops in revenue from expiring patents will lead to lower revenue and profit projections. That leads to a lower stock price. Both Bristol and its recently acquired subdivision, Celgene, were subject to this. This is compounded by the reality that many drug candidates fail later stage, Phase 3 trials, so it is easier to predict the fall in older revenue than the ramp in new revenue. Also, in recent years some approved drugs that were expected, by Wall Street, to quickly become blockbusters turned into commercial duds, relatively speaking. An example is Repatha sales by Amgen (AMGN), which ramped up much more slowly than expected.

The concerns about Bristol and Celgene center on coming patent expirations for Revlimid and Eliquis. Revlimid is used mainly as a treatment for multiple myeloma and generated $2.9 billion in sales in Q1 2020. It has a generic phase in period starting in 2022, with full competition facing it in 2026. Eliquis, an anticoagulant medication with Q1 2020 sales of $2.6 billion, has had some patents expire already, and will probably face full generic competition in 2026.

Together the two drugs represent about half of total revenue for the company. Usually, however, revenue continues after a so-called patent cliff, declining at a rate depending on pricing and competition. While Bristol has several drugs that are currently growing revenue y/y (Orencia, Sprycel, Yervoy, Empliciti, Abraxane), they do not look to be able to replace the lost income by 2026. Whether drugs in the pipeline could do that is the biggest unknown for determining Bristol's future value.

The Bristol Myers Squibb pipeline, reinforced by Celgene's in 2019, is extensive [See also BMY early pipeline presentation slides]. Bristol projects 8 near-term potential launches out of 9 therapies currently in Phase 3 trials. It also has 53 Phase 1 or 2 assets. Continued expansion of the labels of Opdivo and Yervoy dominates the effort. Here I will focus on some recently approved therapies and candidates seeking an initial approval that might generate significant revenues by 2025, thereby potentially offsetting declining Revlimid and Eliquis revenue.

CAR T cancer therapies are one focus. Chimeric Antigen Receptor T cell therapies are already looking to be a medical wonder for this new decade. The first FDA approval of a CAR T therapy was Novartis's (NVS) Kymriah, was in 2017. Gilead's (GILD) Yescarta was approved by the FDA later in 2017 and had sales of $140 million in Q1 2020. Bristol obtained one set of clinical stage CAR T therapies, including liso-cel, from Celgene, which in turn had acquired them with Juno Therapeutics in January 2018. The other set, led by ide-cel, is licensed from bluebird bio (BLUE), also by way of Celgene.

Liso-cel (lisocabtagene maraleucel) has completed clinical trials and has a PDUFA (FDA deadline) date of November 16, 2020. Its first indication will be LBCL (large B-cell lymphoma). In May 2020, Bristol had announced that the FDA extended the action date by three months. Liso-cel has potential to see its label expanded to FL (follicular lymphoma), CLL (chronic lymphocytic leukemia), and earlier lines of LBCL. Another CAR T in trials that originated at Juno is orva-cel. 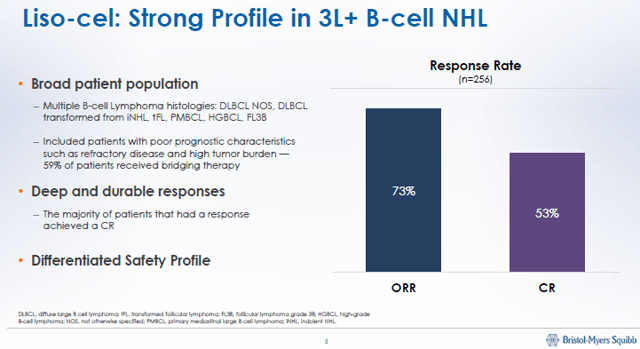 Ide-cel (bb2121) is preparing for its data submission to the FDA, planned for July 2020. The EMA already validated its application in Europe. It is potentially the first-in-class CAR T therapy for multiple myeloma, fourth-line. It could also have its label expanded to third-line multiple myeloma. Another CAR T asset licensed from bluebird is bb21217.

Zeposia (ozanimod) was approved by the FDA for MS (multiple sclerosis) in March 2020, but it is also in the pipeline for a variety of inflammatory conditions. In ulcerative colitis positive Phase 3 results have been reported. In Crohn's disease the Phase 3 trial has begun. It is also approved form MS in the EU. The hope would be it might eventually generate the kind of revenue Revlimid does in MS, plus more for the indications Revlimid does not address.

TYK2 inhibitor is in Phase 3 trials for psoriasis. Initial Phase 3 results are due later this year. It is also being studied in Phase 2 trials for potential label expansion to psoriatic arthritis, lupus, Crohn's disease and ulcerative colitis. Since it works using a novel mechanism, it might bring good results to patients who have not responded optimally to their current therapies.

Reblozyl has already received its second FDA approval, for treating anemia associated with second-line MDS (myelodysplastic syndrome). It received approval in November 2019 for anemia from beta thalassemia. It is licensed from Acceleron (XLRN). It is the only erythroid maturation agent on the market, though not the only anemia agent. Potential label expansion includes first-line MDS and MF.

CC-486 has a PDUFA date of September 3, 2020. It is the first drug to show an overall survival benefit as a first-line acute myeloid leukemia maintenance therapy.

Bristol is projecting about $45 billion in free cash flow over the next 3 years. For Q1 2020 cash flow from operations was $3.9 billion (per Q1 2020 10-Q). The ending cash and equivalents balance was $19 billion against $47 billion in debt. That is a lot of debt, but cash flow should be able to handle it easily.

Currently Bristol Myers pays a dividend of $1.80 per share per year, or $0.45 per quarter. At the June 22, 2020 closing price of $57.15 that gives a yield of about 3.2%. Nice for a growth stock. The dividend is in no danger, even if some revenue drops off when patents expire. In Q1 2020 diluted non-GAAP EPS was $1.72, which is nearly 4 times the dividend. Full year non-GAAP EPS guidance is $6.00 to $6.20. Earnings and cash flow should improve going forward as cost savings are found between the combined Celgene and Bristol organizations. Bristol has a synergy target of $2.5 billion per year. If that happens, the dividend will likely be increased. The next Bristol Myers dividend will be to stockholders of record on July 6, 2020 and payable on August 3, 2020.

Revenue ramps of CAR T therapies, so far, have tended to be slow. These therapies are expensive, have serious side effects, and tend to be tried only after more standard therapies. Doctors and insurers are still getting used to them. On the other hand, they have high, durable cure rates, and could become the therapy of choice over time. Alone, I do not believe they can replace potential revenue losses when Revlimid or Eliquis see generic competition. But they should add significant revenue over the coming decade. More likely as major revenue generators are the immunology drugs Zeposia and TYK2 inhibitor. These should ramp faster and certainly have potential to become multi-billion dollar drugs. But there is a lot of competition now in the category, and some very good drugs in this category may see lower priced biosimilar competition.

I cannot be certain that new drug revenue in the next few years will make up for the declines expected in the second half of the decade, but it seems likely. Q1 2020 saw pro-forma (combined Celgene and Bristol) revenue grow 13% y/y. Most likely revenue will ramp through 2025, take a dip in 2026, then resume ramping. Keep in mind that the six drugs I have focused on are just the most forward part of the Bristol Myers pipeline. There should be waves of new drugs hitting the market as the decade progresses.

Since the dividend is not in danger, and may well be increased, I see little or no downside to the stock price while bond yields stay low. The growth upside will depend on new drug approvals and significant revenue ramps. Investors will worry about the patent cliffs until they are behind us, so there may be some buying opportunities along the way. On the whole I am bullish for this decade.

William Meyers
7.29K Followers
I provided stock and bond research and analysis to a small cap specialist investor, Lloyd Miller, from 2002 until his death in January 2018. For my own account I invest mainly in technology and biotechnology stocks. My technology and investment web site is openicon.com, where readers can view the notes I take to make decisions and to write articles for Seeking Alpha.

Disclosure: I am/we are long BMY, GILD. I wrote this article myself, and it expresses my own opinions. I am not receiving compensation for it (other than from Seeking Alpha). I have no business relationship with any company whose stock is mentioned in this article.