The arithmetic makes it plain that inflation is a far more devastating tax than anything that has been enacted by our legislatures. The inflation tax has a fantastic ability to simply consume capital. 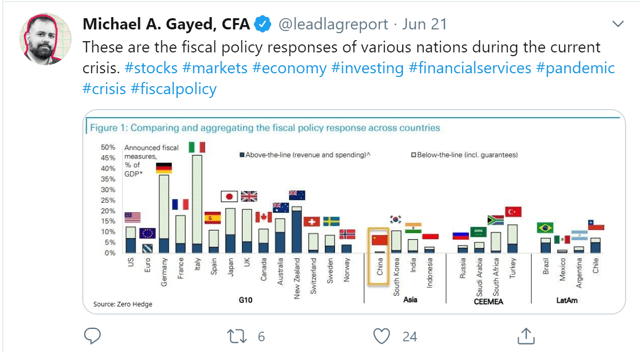 When does the money run out? Does it? There is a massive public dilemma happening right now in the back of minds of economists around the world. The general public is on board with bailing out unemployed citizens with massive monetary and fiscal stimulus, but they should also be concerned with what happens next and the long-term growth implications of current stimulus. After all, the money will not run out. But we are borrowing from the future, and eventually, it must be paid back in one way or another. As I mentioned on the Lead-Lag Report, I see two probable outcomes, and neither of them is fiscal responsibility, higher taxes, and paying off the debt in a reasonable matter. I think the only way the world, and the US, is going to pay back the unreasonable debt burden created is going to hyperinflation or defaulting to the Fed - the next great policy twist in Federal Reserve history.

A look at the global debt-to-GDP ratio does not give much comfort, either. It hit a record 322% in January, and the US debt-to-GDP was sitting around 107%. With an economic recession (numerator dropping) and increasing debt (denominator decreasing), what do you think will happen to these numbers when it’s all over? Up, up, and away! Just not in a good way. This means that servicing and refinancing this debt overall is a tricky and expensive endeavor, and there already wasn’t room to move before. It’s easy for the consensus to forget that we do, eventually, have to raise interest rates. Right now, it’s like a Formula 1 racer with half-done tires with his pedal to the metal. Eventually, he will have to slow down or the momentum will take him off course and he will crash and burn. This is akin to what the fiscal and monetary stimulus is doing - gas pedal pushed, but eventually, will have to slow down when inflation hits. Will it, is the only question - the Fed has promised zero rates through 2021 at this point, and possibly 2022. How on earth will it fight inflation as it comes? We’re already seeing it creep up in certain sectors like groceries and staples. There’s a corner coming up in the next few years, and the brakes need to be ready. 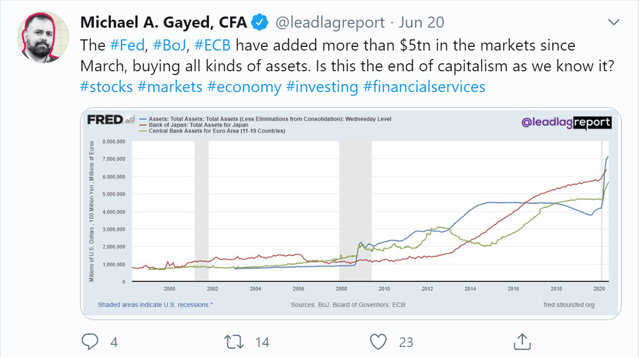 With a sharp contraction in corporate earnings, combined with sharp and mounting job losses, the debt service burden was increasing, and the aggressive monetary and fiscal response was warranted. Gross government issuance hit an all-time monthly record of over $2.1 trillion in March ($3.2 trillion including other sectors), an estimate of the global debt-to-GDP ratio increasing to 342% from the 322% mentioned before. That is, if there’s only a 3% contraction in global economic activity this year, paired with net government borrowing doubling. Are we on the road to hyperinflation to pay off this debt? It is possible. There just wasn’t enough policy space in interest rates before the crisis happened to boost the economy without printing extreme amounts of money. Look, it might not happen right away - in fact, we might see deflation first, especially if there’s a second wave of coronavirus that shuts down the economy again.

Will the Fed stop printing money when that happens? Not likely to be immediate. The US economy is addicted to stimulus. Look at what happened in 2018 when the Fed was selling off balance sheet assets and hiking rates - the market collapsed in December. Coming out of the crisis, if, say, a vaccine is developed, with all this stimulus still in place, consumers are going to spend like crazy because governments have been footing the bill for them over the short term, they get their jobs back and continue to make money. That is going to hike prices. Is that necessarily a bad thing? Debt is expensive, but not if there are hyperinflationary forces cutting the cost of it down. Maybe that’s the playbook here. Worked pretty well for Venezuela.

The other option that is not talked about much is what if the Fed just lets the government and corporations default to it? A happy reset, if you will. It would not be met well politically, but at some point, the Fed will want to raise rates. If we see extremely high inflation, the only defense is to raise rates - hard to do that when debt-to-GDP levels would throw you into a massive depression. Why not let some “little” defaults happen to push the ultimate goal of fighting the nasty inflation bug. The Fed is already buying corporate junk bonds, effectively putting worthless debt on its books, turning crap into Fed-backed instantly. What if it would just “write it off” as Kramer and Seinfeld posited, so the Fed can hike rates without it affecting the debt-service ratios that will be too effective. America could be the next Greece. Wouldn’t mind some of those Ouzo shots right about now and retirement at 50, especially after this market. We don’t really know how this all will work in practise; we only have economic theory. As the lockdowns have been a great scientific experiment to see if we can defeat a virus, the global monetary and fiscal stimulus run is the great economic experiment. Only the history books will know what happens next.

So, what to do? It would be amiss if you didn’t have some gold (GLD) exposure in your portfolio to fight the fiat currency expansion. If you’re a fixed-income investor, shortening up the duration by buying something like BIL or SHY might be better than shooting to the long end of the curve, given what interest rates do when inflation and expansion happen (hint: it’s not good for prices). Stock markets have certainly been a good place to “hide out” in during this crisis, especially tech winners. Continue to add to names that are earning good money in bad times, and you might even want to add a bunch of junk bonds to your portfolio, since the Fed is just going to bail them out anyway (kidding, sort of). Look, the two ideas of hyperinflation and defaulting to the Fed are a bit of a stretch, I will admit. But they look more probable now than ever before. The only other ways out are a massive hike in taxes to start paying down the debt, or GDP that grows exponentially so that remittances increase naturally. Neither of those look probable, in my estimation, at least in the short term, and the latter solution has inflation implications, as mentioned above. Prepare, don’t react.