After I was asked to create a dividend portfolio consisting of just a small number of companies with huge potential, I decided to get to work. In this article, I will show you one of these 6 companies. I will start by explaining why I believe that Duke Energy (NYSE:DUK) is a strong long-term income play based on its company characteristics, strong cash flow, safe balance sheet, and rising dividend payments. After that, I will give you a brief preview of the 6-stock portfolio. So, bear with me.

What's Duke Energy & Where Does It Make Money?

Let's start by mentioning the basics. While I am writing this, Duke Energy is valued at slightly less than $63 billion. The company, formerly known as Duke Energy Holding Corp, changed its name and became incorporated in 2005. The company's industry is 'utilities - regulated electric'. In this industry, Duke is the second-largest stock listed company behind NextEra Energy with a market cap of more than $120 billion.

With that said, let's dig a bit deeper starting with the first reason why I like Duke. In 2019, the company generated 85% of its earnings in electric utilities and infrastructure. Gas utilities and infrastructure accounted for 9% of earnings with commercial renewables coming in at 6%. These earnings were mainly generated in six key states. I am going to list them all as it matters in this case: Ohio, Indiana, Kentucky, North & South Carolina, Florida. I especially care about the last three states as these are benefiting from a massive population surge as we are witnessing a population shift from the New York, and California regions to lower-cost states.

Just to give you an example, in the first quarter, annual growth in the number of residential customers for Duke Energy was 1.5% for customers in the electric segment. The Midwest was up 1.1% while the Carolinas saw 1.7% growth, closely followed by 1.6% growth in Florida. In this case, 33% of total electric sales came from residential customers. This market has done well due to shelter in place orders and will likely accelerate in the current second quarter and beyond due to heat-related cooling activities.

While these numbers display the current economic situation, the long-term growth trend is even more important.

If you expect anything spectacular, it's best to ignore this company. Duke Energy is not spectacular. Its business model is boring, and its sales are showing a very slow uptrend. However, if you like income from a good dividend company, this is the way to go. Since the company became incorporated in 2005, sales have grown on average by roughly 9% per year (CAGR). Most of it took place prior to 2013, but even between 2013 and 2019, the CAGR is positive at 1.5%.

Fortunately, operating cash flow looks better. Since 2005, the company's operating cash flow has grown 7.4% CAGR with only three years that showed a decline: 2007, 2011, 2017. In 2007, the company faced the Great Financial Recession, in 2011, global commodities peaked (Duke's sales did not) and, in 2017, companies faced the effects of a manufacturing recession that started in 2014 (only Duke's operating income suffered due to a decline in margins). Either way, since 2013, the operating cash flow growth rate is 3.8% CAGR, which is almost double the inflation rate and a strong result given the relatively weak sales growth rates. It is also worth mentioning that the company's net change in cash (net income adjusted for operating, financing, and investing cash flow) has been well balanced with only a few outliers - most of them being positive outliers. 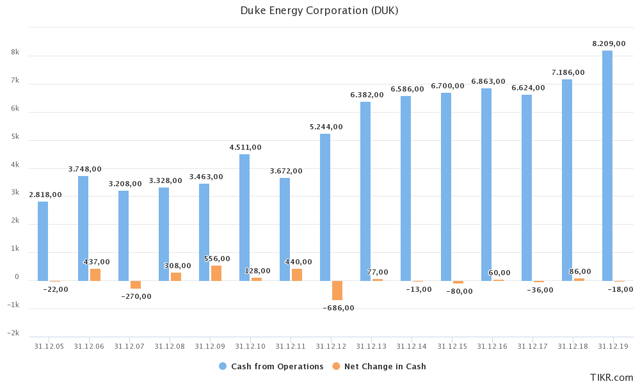 On top of that, the company has maintained a high payout rate. Since 2010, total dividend payments were roughly one-third of GAAP cash from operations. There are a few outliers due to the declines in operating income, but other than that, the ratio has been fairly consistent. When compared to GAAP net income, we are looking at a much more volatile chart as net income tends to be more volatile. Especially when unadjusted (GAAP). Either way, the payout ratio has been roughly 90% since 2010. I am mentioning 2010 as financials started to lose volatility after the recession.

With that said, by now you want to know how much the company actually pays you for holding its shares. The answer can be seen below. Since 2007, Duke Energy's dividend has shown a 2.9% CAGR. It's roughly the same when starting in 2013. 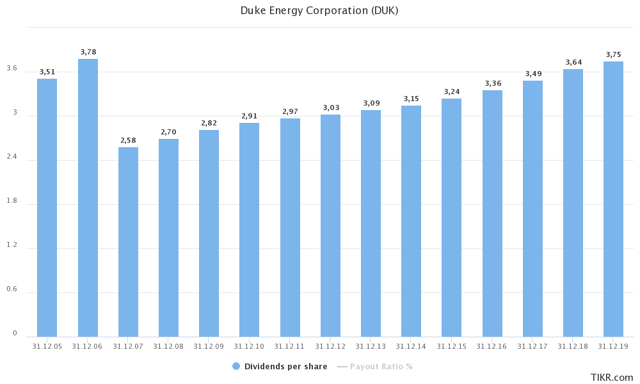 Luckily, long term, the company's dividend yield is down. The only reason why I am saying this is that a steady yield would have indicated that capital gains are more or less equal to the dividend payment growth rate (2.9% since 2007). As you can see below, since the recession yield peak at roughly 7.2%, the yield has declined until 2015. Since then, the company's yield has been between 3.60% and 4.80%. If you were a good market timer, you had a few profitable buying opportunities.

Another important point worth mentioning is the company's balance sheet strength. I do not consider overleveraged companies good long-term dividend stocks for the top-6 is am presenting. If there is one thing utilities have in common, it's that their PEG ratio (long-term valuation) is high and that they have an elevated debt/equity ratio. The valuation makes sense as investors care for yield and apply an appropriate valuation based on that. The debt/equity ratio also makes sense as utilities can afford to have more debt. Simply because their income is predictable, anti-cyclical (to a large extend), and not volatile.

Like its peers, Duke Energy has an elevated debt/equity ratio. In this case, the ratio is at 131.2% or 1.31. Good thing is that total liabilities are valued at 70% of total assets. While this is not 'low', it certainly is sustainable and not an uptrend. Even when looking at relatively stable companies, you want to avoid the ones that show rapidly increasing debt and outperforming growth rates. As you can see below, total liabilities were valued at slightly less than $40 billion in 2011. This number has gone up to almost $111 billion in 2019. Fortunately, the company has invested heavily in assets and its business expansion, which has resulted in a steady total liabilities/equity ratio. Adding to that, EBIT covers interest expenses 2.7x while net debt is valued at 5.6x EBITDA.

With regard to liquidity, the company's current assets cover roughly 62% of current liabilities. As this is below 100%, it generally means something is wrong or likely to go wrong. However, utilities often have tight liquidity as they quickly invest cash and pay elevated dividends. In the case of Duke Energy, roughly half of all current liabilities consist of accounts payable and the current portion of long-term debt - a total value of $7.3 billion. These costs have never been an issue as incoming liquidity has always been able to service these costs. I would be concerned if the company's cash flows were highly cyclical or dependent on a few products with a lot of competition. As a result, the company's credit rating according to S&P is A-, which translates to 'upper-medium grade' quality. On a side note, the outlook is 'stable' according to the rating agency.

Finally, the part where I show you the portfolio I worked on. It's six stocks, and a return that crushed the S&P 500. Since 1994, these six stocks have outperformed the S&P 500 by almost 500 basis points per year, resulting in more than $330K on $10K invested (no additional investments). I am going to cover all of these stocks on this website. This article had the purpose of showing you why Duke Energy belongs in this portfolio. As boring as this company is, it has a good business model that should benefit from secular growth as the population in its regional outperforms. Additionally, the company has healthy cash flow, a high and rising dividend yield, and it adds safety to one's portfolio. Based on historical data, the six stocks below not only outperformed the market, but they also had a much better 'worst year' and a lower standard deviation.

I added the stock on Wednesday (06/24/20) at $80.23. I will hold this one for a long time and I am going to cover all stocks on the list above and keep you up-to-date on the performance of the six stocks once I have bought them all.

The only thing I want to add is that regardless of whether you like Duke or any other stock, you should take care of your risk management. Times are tough. The market is volatile and unemployment is high. Make sure to have enough cash for emergencies and only buy stocks you don't mind holding when things on the stock market get ugly again.

Disclosure: I am/we are long DUK. I wrote this article myself, and it expresses my own opinions. I am not receiving compensation for it (other than from Seeking Alpha). I have no business relationship with any company whose stock is mentioned in this article.