It will probably not be the last chapter in this sad and inglorious history of Wirecard (OTCPK:WCAGY, OTCPK:WRCDF). At the moment, I am writing this article, Wirecard has filed for insolvency. Just to anticipate one thing, I also hold shares in the company, as I have documented transparently here at Seeking Alpha. Hence, I think that it is time for an obituary and time for investors to reflect.

I share not only my successes but also my failures. And so far, Wirecard was the biggest mistake of my "career" as a private investor.

(Source: My worst bullish rating ever)

With such price losses, I can book a complete loss of my investment here. The insolvency doesn't change much in this respect. I do not expect the company to survive this. While I have never had problems understanding the business model of Wirecard, we have to assume that the business model, as promising as it sounds, did not exist to the extent documented by the company.

Although in the current insolvency proceedings, the business (as far as it exists) will be continued, this will hardly help the company and its investors. Most customers (if they exist) will terminate their contracts with Wirecard and switch to other providers such as Adyen (OTCPK:ADYYF) (OTCPK:ADYEY) (AMS: ADYEN).

Since Wirecard only charged low fees of approx. 1 to 1.7 percent per transaction, the company needs a high transaction volume to operate profitably. Even if we look at the withdrawn balance sheets, the gross margin was always meager.

Visa (V) and Mastercard (MA) would not even have to cut their ties with Wirecard, because apparently Wirecard was never really profitable. Even with Visa and Wirecard, the loss of reputation as a result of the scandal will very likely ensure that Wirecard will not be able to keep its feet on the ground.

The best thing that could happen to investors would be a takeover. The market capitalization is less than half a billion.

But who should invest in Wirecard now, even if the company is cheap? There is a reason why not even the concrete rumor of a takeover has come up. The company is currently a black box that nobody can read. Wirecard is also likely to lose most of its banking licenses. The company is, therefore, degenerating into a game of gambling, in which I advise every investor not to bet.

Some say it was greed by investors and negligence by authorities

Some commentators say that it was primarily greed that drove investors into Wirecard. Likewise, BaFin, as the German financial supervisory authority and the public prosecutor's office had acted negligently when they did not intervene despite the Financial Times' indications.

I don't think so. The Financial Times has indeed done an excellent job. But raising suspicion and providing some indications is different from proving fraud.

In the end, it was not greed that drove investors like me to invest in Wirecard. It was a simple bet. On the one side was the Financial Times, and on the other hand were auditors, BaFin and companies. And like I said, I chose a team and threw a few dollars in the middle:

"So I know that I am investing in a company that is facing pretty serious accusations. Furthermore, it is not totally unlikely that there is some fire behind all the smoke.

So that's the bet and the risky part every investor needs to know. A bet on the fact that in the end there were some mistakes which do not affect the fundamental position of the company."

If we look at current developments and current knowledge, the problem with this bet was accordingly not greed, but naivety. My bet was based on the assumption that Wirecard may have had some compliance violations but fundamentally corresponded to what it was supposed to be.

It was the confidence that the players at the table (Wirecard, BaFin, and Ernst & Young) more or less adhered to the rules of the game, which wasn't the case. But as so often, it is the gullible and stupid who are most likely to become victims of fraud. Nevertheless, I am in good company with other investors. At the end of May, funds such as DWS (Deutsche Bank) and Alken held a significant amount of Wirecard shares in their books. In some cases, Wirecard accounted for 10 percent of these funds: 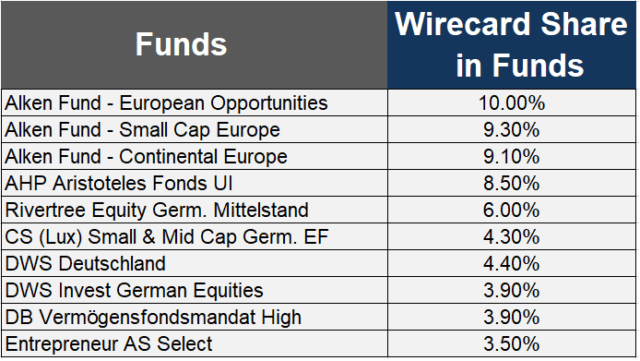 Like me, they naively assumed that the security mechanisms (BaFin and auditors) would have revealed worse violations and that a high discount had already been priced into the share price:

"Nevertheless, the market already seems to be pricing in the fact that some of the accusations may be true, as the market is currently trading the company at a discount of a good third of its 52-week high. That is enormous..."

Is there anything we can learn?

We can still learn something as investors. If you have the right mindset, you can easily cope with a loss. The mindset of such an investment must always be that you know that you are only making a bet that can lead to a total loss. Wirecard is not a company like Procter & Gamble (PG) or Johnson & Johnson (JNJ), but a company that came from the porn and gambling scene. Therefore, such an investment should never make up a large part of your assets. If all external security mechanisms fail, then your own must take effect. And here are the essential aspects:

I don't think that there will be a comeback for Wirecard. It is not out of the question, but first of all, the stock will probably become a highly volatile gambler investment with no clear direction. It may take years to process the accounting scandal. Right now, there is no reasonable investment theory for the company. However, investors can draw some valuable conclusions from this adventure, which I stated above.

Wirecard is part of my diversified retirement portfolio. If you enjoyed this article and wish to receive other long-term investment proposals or updates on my latest portfolio research, click "Follow" next to my name at the top of this article.

The European View
12.97K Followers
Runner of the TEV Blog | Lawyer For Competition Law And Antitrust | Private InvestorI am a long-term oriented investor and in my early thirties. I hold a law degree and a doctor in law and love investing and talking about my and others' investments. I regularly write about my research and investments on various investor platforms and on the TEV Blog. Living and working in Europe in an international law firm as a lawyer for antitrust & competition, I may have another view on American companies, especially when it comes to the reputation of a company or possible alternatives here in Europe. Hence, I try to build a diversified portfolio not only with American blue chips but also with smaller and maybe hidden European Champions. Given that, I am very sensitive and close to the political and economic fundamental environment in Europe. My readers benefit from this. When it was foreseeable that Qualcomm would be fined by the European Commission, I calculated the exact amount in advance and was able to inform my readers about it. The same applies to the European Commission's first interim measures against Broadcom, which were the first in two decades. Furthermore, I was the first analyst (to my best knowledge), who predicted without any doubts a dividend cut by Deutsche Telekom. **My articles represent my opinion only and in no way constitute professional investment advice. It is the responsibility of the reader to conduct their due diligence and seek investment advice from a licensed professional before making any investment decisions.**

Disclosure: I am/we are long WRCDF. I wrote this article myself, and it expresses my own opinions. I am not receiving compensation for it (other than from Seeking Alpha). I have no business relationship with any company whose stock is mentioned in this article.