After a solid start to the week, midstream stocks collapsed over the last four days this week, including big declines Tuesday and Friday.

One MLP was flat this week: Sprague Resources. The rest were negative.

After a solid start to the week, midstream stocks collapsed over the last four days this week, including big declines Tuesday and Friday. Broad stock market volatility and weakness due to ramping COVID-19 cases drove the overall weakness, with commodity prices correlation driving much more downside capture for midstream this week. 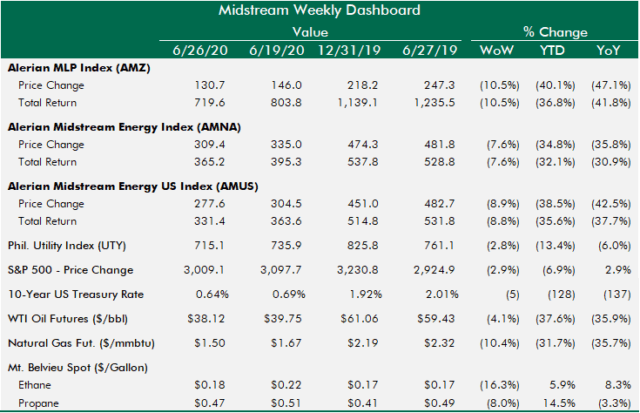 Midstream (NYSEARCA:AMNA) finished the week down 7.6%, outperforming MLPs and U.S. midstream corporations by a wide margin. Midstream is back to matching YTD oil price change in the mid-30% negative return range.

I'll recap monthly performance next week, but for now, the ongoing cataloging of volatility continues in the chart below where I've updated the worst weeks ever chart. 2020 now has 5 of the worst ever weeks for MLPs (AMZ) and the broader midstream (AMNA) indexes. This was the second top 10 worst week ever in June alone.

The ongoing swings in performance are likely to continue in the near-term with uncertainty regarding economic activity, how the commodity oversupply gets back into balance, then how the market clears the massive excess inventory. Despite having more stable cash flows than upstream, midstream sentiment tends to fluctuate with the outlook for both supply and demand, both of which are in flux at the moment.

When it Rains, It Pours

Natural gas prices made headlines for hitting a 25-year low this week. Nymex record low is $1.05/mmbtu in 1992, and it feels like the front month could test that level in the coming months. Cancelled cargos, weak domestic industrial and other demand, and the return of shut-in production in oil basins appear to have combined to slam natural gas prices. The outlook for storage from here is bleak and near-term futures are pricing in that bleak outlook.

Things are rough for those of you working in the energy sector in Texas. In addition to dealing with weak commodity prices, layoffs and the summer heat, there's now the growth in cases and hospitalization numbers that has the state backtracking on its restart process. Also, apparently a large dust cloud/storm is hitting Texas this weekend. It's basically raining negative news on Texas. I try to steer clear of biblical references here, so I'll reference a film that makes overt biblical references: Magnolia. Late in the film, it starts raining frogs.

Whatever allusion is being made in that film, I was reminded of that scene this week when thinking of my many Texas readers and family members. My heart goes out to you as you manage all of the above alongside your stir-crazy children.

On a lighter note, thinking of references to rain and dust clouds got me thinking of two scenes in comedies as well. The first was in Baseketball, when Tim McCarver interviews Joe Cooper after he loses the big game. After the interview, he turns to the camera and says in a serious tone, "It certainly does seem to be raining shit on Joe Cooper right now."

Thinking of that scene makes me think of the scene in Kingpin when Roy Munson explains to Ishmael why they have to leave the hotel in the middle of the night. He explains how there is a huge cloud of… then trails off when he sees Claudia waiting at the car and exclaims, "shit!" Naïve Ishmael didn't catch the pause and is fascinated by the idea of a cloud of excrement, even going so far as to say, "I think I smell it!"

If you're looking for something uplifting to watch this weekend, I would recommend these two classic sports films over the much more critically acclaimed, but less uplifting Magnolia.

If recent history is any indication, midstream pain is usually followed by positive reversals that are equally violent. Like the old Mark Twain saying goes, "If you don't like the weather in [midstream] now, just wait a few minutes."

One MLP was flat this week: Sprague Resources (NYSE:SRLP). The rest were negative. Those with DJ Basin exposure seemed to dominate the worst performers, including Western Midstream (NYSE:WES), Noble Midstream Partners (NASDAQ:NBLX) and NGL Energy Partners (NYSE:NGL). The worst overall was NGL, which appeared to be dragged down by news of large customer XOG declaring bankruptcy last week and filing a motion to reject its contract with NGL's Grand Mesa Pipeline this week. 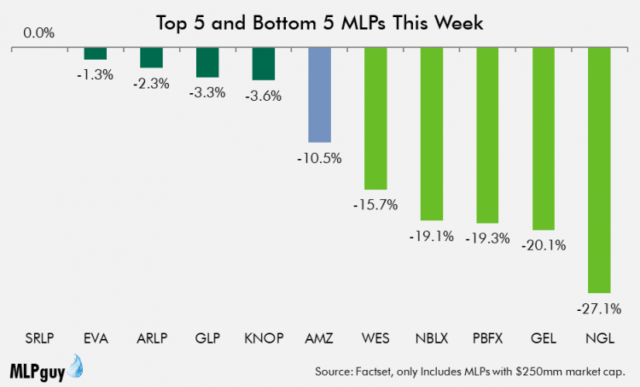 WES and PBF Logistics (NYSE:PBFX) went from top 5 last week to bottom 5 this week, in ongoing extreme volatility for those names in recent months. NGL repeated in the bottom 5. Alliance Resource Partners (NASDAQ:ARLP) went from bottom 5 to top 5, outperforming despite cratering natural gas prices. On the YTD leaderboard, SRLP reclaimed the top spot from Cheniere Energy Partners (NYSEMKT:CQP). In the bottom 5, all 5 of the worst performing MLPs are down more than 55% again after a rough June so far. 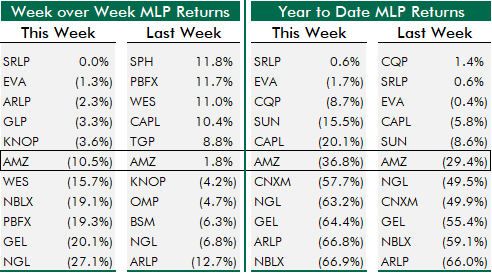 The midstream corporation group was negative across the board this week. Williams Companies (NYSE:WMB) held up the best, followed by Hess Midstream (NYSE:HESM) and its superior G&P contract structure. Kinder Morgan (NYSE:KMI) and Cheniere Energy (NYSEMKT:LNG) were also notable in the top 5 and seem to be trading more defensively of late. The Mountain Valley Pipeline ruling honeymoon seems to have carried over into this week for Equitrans Midstream Corp. (NYSE:ETRN), which outperformed despite record low natural gas prices. The biggest loser was Antero Midstream (NYSE:AM), which was likely impacted by those natural gas prices (and profit taking), along with other G&P names like EnLink Midstream (NYSE:ENLC) and Targa Resources (NYSE:TRGP).

AM went from first to worst week over week, ENLC and Rattler Midstream (NASDAQ:RTLR) repeated in the bottom 5. WMB, ETRN and LNG repeated in the top 5. On the YTD leaderboard, AM's strong run came to a screeching halt this week, dropping it from the top spot down to 3rd place. WMB reclaimed the top spot, only down around 18%. 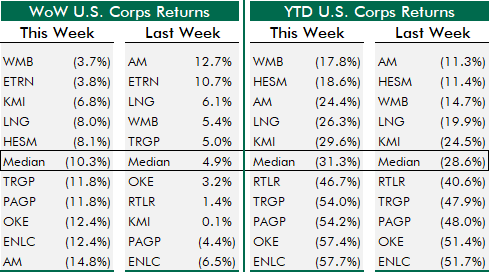 Canadian midstream was negative this week, but with a smaller range and smaller amplitude than the other midstream groups, which is what you'd expect from the generally less volatile Canadian stocks. 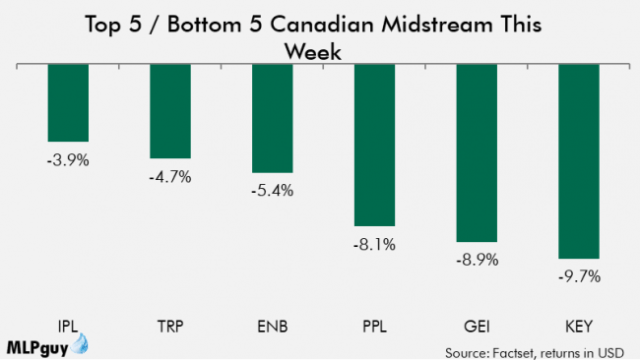 Stock performance rankings were basically reversed this week vs. last week, with Inter Pipeline (OTCPK:IPPLF), TC Energy Corp. (NYSE:TRP) and Enbridge (NYSE:ENB) in the top 3 spots after being the bottom 3 performers last week. IPPLF was the surprise of the group this week showing up at the top despite typically trading with more beta, as evidenced by its bottom spot on the YTD leaderboard. TRP remains on top of the group overall, but no stock is down less than 20% in USD terms for the year.

Two small bits of capital markets news this week. First Gibson Energy (OTC:GBNXF) took advantage of low interest rates to issue new debt, while Enterprise Products (NYSE:EPD) took another step towards eventually clearing its modest equity overhang. The rest of the news was not capital markets or M&A related, with the two bits of news on ENB's maligned numbered pipelines probably being the most significant news of the week.