Whenever I talk about Facebook (FB), I feel obligated to provide a disclaimer. Ever since I started covering this name, my bullish and bearish calls have been about as terrible as they come:

Despite seeing my confidence chipped away by a pitiful track record, I feel compelled to make yet another call today. In my view, Facebook has peaked -- both the company and, possibly, the stock.

I wonder if, this time, my caution will prove justified. 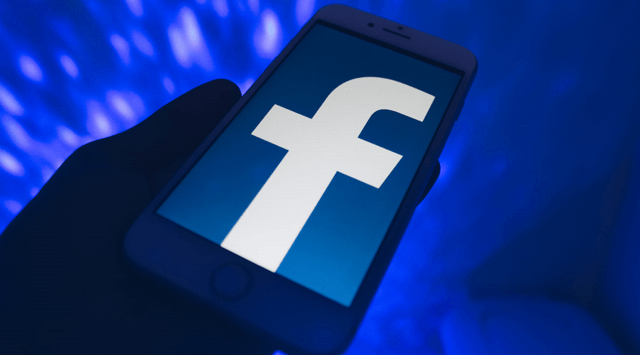 A thumbs down in the short term

Another round of cancellations by heavy weights like Verizon (VZ) and Unilever (UL) sent Facebook stock tumbling on Friday, June 26. While each boycotting client's ad budget alone may not add up to much on the heals of Facebook's massive $70 billion in revenues generated last year, many of them combined could create some drag to growth in an already challenged 2020.

But in my view, Facebook's short-term problems extend beyond the trending hashtag movement of the week. This year, which was marked by Facebook's first ever top-line growth rate of less than 20% delivered in 1Q20, has been a tough one in the advertising business.

To be fair, ad spending may have bottomed in April -- at least "it feels" this way to some experts. But as the graph below depicts, the overwhelming consensus expectation is for advertising to remain flat to lower YOY through June at least. While increased usage of its flagship platforms and rising ARPU have helped Facebook to keep revenue growth in mid-teen territory through the pandemic, tighter budgets can't be a good thing for the company going forward. 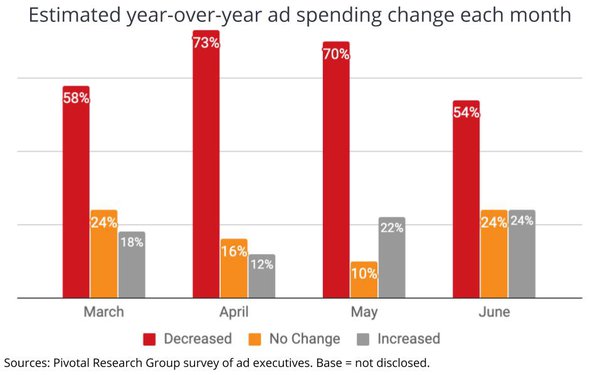 And then, of course, there is the medium-term economic impact of COVID-19. As the global economy shows clearer signs that it will remain under stress for longer, advertisers should face challenges on two fronts: decreased budgets (an internal problem) and lack of demand for its own products and services (an external problem). This will probably hurt small and mid-sized companies most, whose pockets might not be deep enough to endure a recession that is looking more severe by the day.

Regarding larger advertisers, some of them have been bailing on the back of #StopHateForProfits, although the boycott may prove to be short-lived. More importantly, these companies could very well be encouraged to shift marketing dollars away from Facebook and into channels that, while facing secular pressures, could present better ROI opportunities.

For starters, there have been studies in the past suggesting that TV and print tend to provide better return on ad dollars than online display and even video. Second, lower demand for TV and print ads (see chart below) could drive CPM lower on these platforms, which is good news for advertisers but not for online players that have to compete with it. And third, among digital platforms, Facebook campaigns have consistently trailed those of peers Alphabet (GOOG)(GOOGL) and Amazon (AMZN) in the race for ROI, at least through last year. 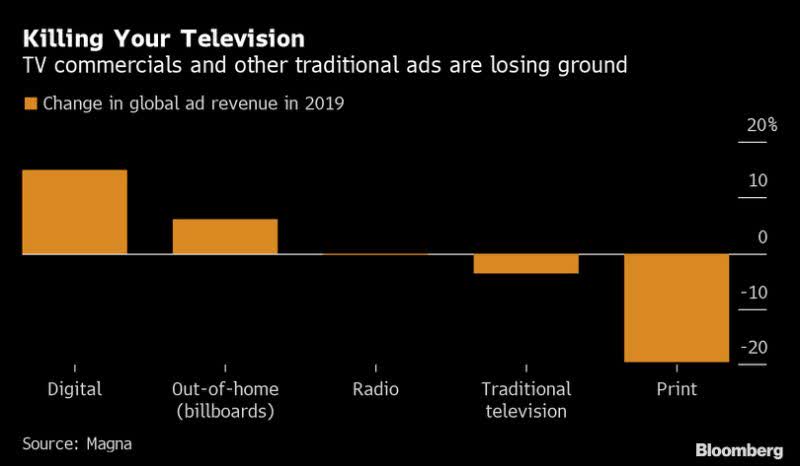 The question becomes: would large brands want to allocate more ad dollars this year to a potentially under-performing media channel at a higher cost, while exposing themselves to the risk of having their ads run next to inappropriate content that Facebook has, so far, failed to moderate properly? My hunch is probably not.

A crying face in the long term

If Facebook's grim short-term prospects were not enough, I also see headwinds in the longer term.

First, it concerns me that yet another confidence crisis (think fake news in the 2016 election year and data sharing scandal in 2017) could cause a longer-lasting "bear market" in social media usage. Number of daily users in the more profitable developed markets grew by less than 6% YOY in 1Q20, a quarter that should have benefited from the stay-at-home economy. I wonder if that number could begin to decline in the face of another round of bad PR for the Menlo Park company.

Second, some of the same issues that Facebook faced before COVID-19 and #BoycottFacebook remain in place. The company continues to pour money into security and community management. Facebook's payroll nearly doubled in the past two years alone, while revenue growth continued to decelerate linearly. As a result, margins have declined fast and earnings growth dropped from 2018 levels. See trailing three-year chart below.

Given the circumstances, I can't count on any of these long-term trends improving any time soon.

Better stay away from the stock

It took me a while to appreciate Facebook's business model. By the time I did, the company had probably reached its peak as a high-growth, rich-margin social media behemoth.

Now, I believe that Facebook's good ol' days have been left behind. Supporting an investment in the stock today are declining valuations, although not much else. Trailing P/E of 29x is roughly on par with the broad tech sector and, among FAAMG names, EV to FCF is only higher than Apple's (AAPL) multiple. For a company and stock that once ran on expectations of high top-line growth and expanding margins, buying FB as a value play while the company undergoes a confidence crisis does not seem to me like an appealing proposition.

FAAMG stocks have been key contributors to my All-Equities Storm-Resistant Growth's returns since inception. But other mega-cap names have produced an even larger portion of the portfolio's gains, which have been better than the S&P 500 by a mile (see graph below, pink line).

To learn more about the storm-resistant growth approach to investing, I invite you to join our community. Click here and take advantage of the 14-day free trial today. After that, don't forget to join the Live Chat so we can share a few thoughts.

Disclosure: I am/we are long AAPL, AMZN, VZ. I wrote this article myself, and it expresses my own opinions. I am not receiving compensation for it (other than from Seeking Alpha). I have no business relationship with any company whose stock is mentioned in this article.