China's cloud adoption is very strong, especially after the pandemic, which has prompted the need for remote work.

Digital transformation is also driving the demand for hyperscalers.

ByteDance win could be the next catalyst for the stock.

Valuation is still attractive despite the recent stock price surge.

GDS Holdings' (GDS) stock price has risen more than 120% in the past year despite growing concerns on its status of a Chinese company publicly traded in the U.S. as an ADR. But demand for hyperscaling has been very strong, especially after the health panic relating to COVID-19 and the shift to cloud underpins medium-to-long-term growth.

The company is the largest third-party, carrier agnostic, and high performance data center provider in China. It funds the data center build-out with its third-party development model and has a proven track record with leading hyperscale customers like Tencent (OTCPK:TCEHY) and Alibaba (NYSE:BABA).

The main driver for the top-line growth was due to incremental improvement in the utilization rate which hit 71% in 2019, from 64% in 2017. The company's capacity increased by 4K sq.m. organically or by 25K sq.m. if we include M&A. According to the management, they are optimistic in reaching 50K sq.m. in 1H20, which is 50% of the full-year target of 100K sq.m.

Newly committed area is signed for 22K sq.m., a figure which is a sequential improvement over recent quarters. This was bolstered by customers who are stepping up their efforts to support remote work and other new digital initiatives. 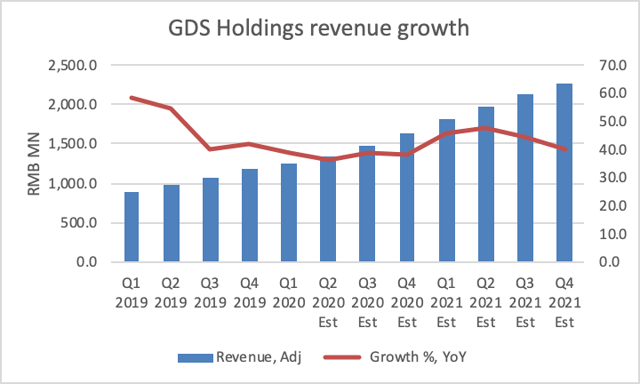 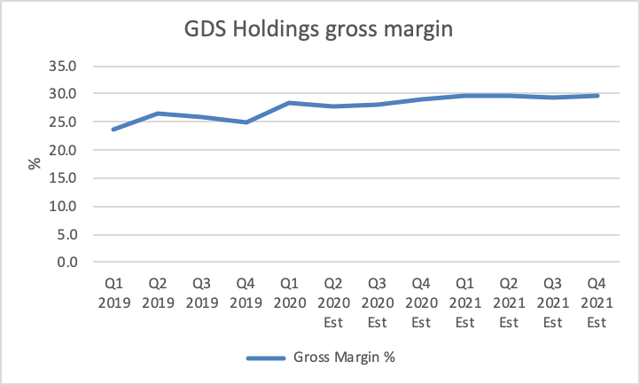 During their last earnings call, the company holds its full-year target for EBITDA of RMB2.6B. This implies over 60% yoy growth and also roughly what the consensus expects. 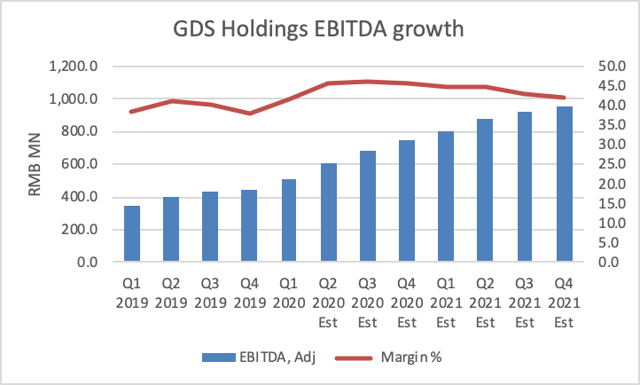 Robust pipeline and expanding customer base

GDS's average capacity growth would likely be around 100K sq.m. per year in FY20e-FY22e, focusing on satellite tier 1 areas of China. Move-in in 1H20e is, understandably, slower due to supply bottleneck in server equipment and construction but is expected to be largely alleviated in 2H20e as China has resumed work throughout most of its cities.

Cloud adoption has been key to the success of the company. Due to the pandemic, governments and corporate are pushing aggressively to cloud in order to support their remote work and other digital transformation initiatives.

Alibaba, Tencent, and Huawei are the company's top existing customers who will likely continue to expand, propelled by China's secular demand for cloud. A significant catalyst for the stock will come from market share win with ByteDance (BDNCE), currently, the only hyperscaler which does not source GDS for data hosting. 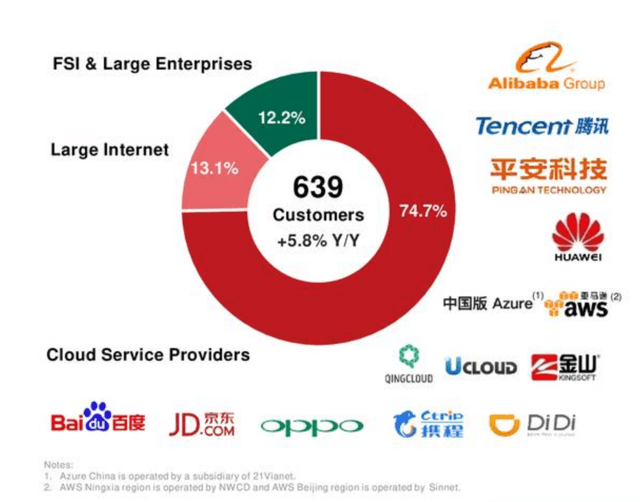 Since 3Q19, GDS has been looking to diversify away from its self-developed data centers, mainly used in tier 1 cities, to adopt a relatively more capital-light funding structure through joint ventures with GIC (Singaporean sovereign wealth fund.) This new model is able to take advantage of the growth potential in expanding to remote site areas in a more efficient manner regarding capital expenditure as it does not require a bulk initial outlay.

Alibaba is already onboard with this new model, and the company expects "built-to-suite" JV projects to gain further traction, and other customers like Tencent may follow suit.

Advantages of the JV model with GIC

Instead of profits realized from selling typical, completed data center projects, GDS is able to gain a modest amount of annual management fees and income from disposal (GDS owns 10% of the project's equity upon completion of the sale of the data center project to GIC), under the JV model with GIC. Thus, capital costs for the projects will be minimal.

Despite trading over 4x forward EV/EBITDA, which is higher than its historical average, the outlook for the company is very strong with hyperscaling demand to be robust in the next few years in China. Given GDS's superb market leadership position, it can continue to capture the market growth potential. The biggest upside catalyst for the stock is if GDS wins ByteDance as a customer.

Additional disclosure: Disclaimer: All research, figures, and interpretation are provided on a best-effort basis only and may be subject to error. Any view, opinion, or analysis does not constitute as investment or trading advice, please do your own due diligence.

Follow Himalayas Research and get email alerts
+
Add a comment
Disagree with this article? Submit your own.
To report a factual error in this article, click here.
Your feedback matters to us!