Update to my outlook for default rates based on the latest data.

Despite it being a volatile week for mortgage insurers, they are still in a very healthy position.

There has been a slew of new developments since my last article on this topic. I'll begin by eating a bit of crow in being overly optimistic in how low default rates will remain through May and June for the PMIs. I was thrown off by NMIH's reported continuation of default rates through May, which has turned out to be an anomaly that has since corrected itself. Since then, MTG, RDN, and NMIH have filed SEC documents that served as notice to their reinsurance ILNs that default rates had reached a trigger point that would halt the amortization of their respective ILNs.

Based on the data that has now been filed, we can lay out estimates for the PMIs as follows (I am using a rough estimate for NMIH based on its ILN trigger notices): 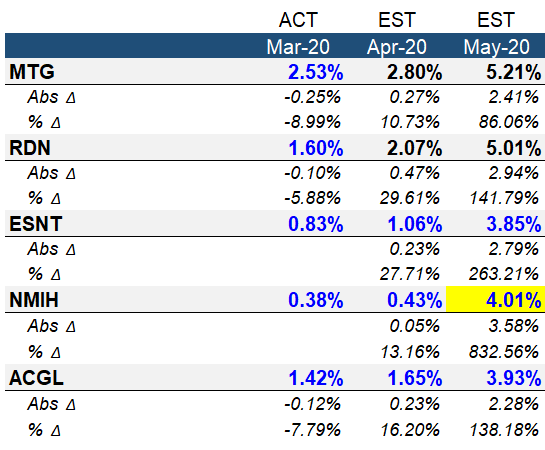 (Source: Compiled by author based on public documents)

The anecdotal evidence side is a bit murkier. I've seen several surveys which range from "all clear" signals to "we're doomed," and I suppose these variations have a lot to do with what kind of ax the publisher has to grind. Here are two great examples:

So, according to the first source (the Federal Reserve):

About 12.6% of Americans say they were worried about being able to make a minimum debt payment in May, down from a seven-year high in April (16.2%), according to a survey of consumer expectations released by the Federal Reserve. The 12.6% figure is in line with percentages from December, prior to the pandemic that sent a shock wave through the economy.

But according to the second source (NAR and OnePoll):

A survey of 2,000 American homeowners found that 52 percent are constantly concerned about making their mortgage payment on time. Forty-seven percent of the poll say they’re considering selling their home because they can’t afford their mortgage anymore.

These results clearly cannot both be correct. I'll admit I'm biased, but I would put more faith in the Fed's process, and I think an 8.8% national forbearance rate lends further weight to their side.

With all of this in mind, I've updated my forecast for where I think reported default rates could go in June for the PMI industry:

(Source: Compiled by author based on Black Knight data and FNMA 10-Q)

Without a further deterioration in macro conditions, I would expect default rates to level out near 7% in the near term. But investors are naturally more worried about the uncertainty of what happens going forward, i.e., what is the worst-case possibility?

In my mind, there are three key risks going forward that could lead to a further increase in default rates:

When we lay out the weekly count of mortgages in forbearance against weekly continuing unemployment claims, we can see they are highly correlated (as would be expected). 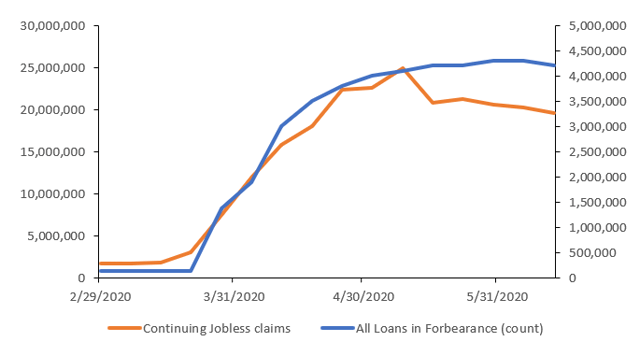 I think it is reasonable to assume that forbearance requests and defaults should not see a dramatic increase without a causal underlying increase in unemployment. The bullish bias in me even suspects it's possible that forbearances have been "sticky" even as continuing claims come down, i.e., there is not a strong incentive to voluntarily remove forbearance after regaining employment. You can just let it run its course.

In my attempt to stress-test default rates, I am going to assume that everyone receiving continuing unemployment claims (all 19.5 million, per the latest data) will not be able to pay for housing once the supplemental benefits expire. I'm also going to assume that 60% of that population are renters (a conservative estimate, to my mind, given a greater share of service sector/lower wage jobs have been lost during this recession). This would result in 4.2 million loans in forbearance jumping to 7.8 million. I'll then assume a 20% jump in unemployment claims due to additional potential job losses and apply the same logic on 60% being renters. The table below summarizes my stress test outcomes:

This exercise suggests to me that a worst-case scenario could push default rates to 12-15%. For reference, MTG's default rates peaked at 18.4% during the GFC housing crisis, with prime defaults at 13.3%. My personal opinion, however, is that we will receive additional fiscal stimulus that gives additional help to the jobless before the supplemental benefits expire, and that we've seen peak unemployment and that it will slowly improve over time (a U-shaped recovery).

For the benefit of everyone following the mortgage insurers, I've updated my price target model below. To address the risk of a housing price decline, I'm making a very simple assumption that the national median housing price declines by 5% as a result of all of the forced sales (median prices were $231,000 in 2019, according to Experian) and adding the resulting $11,550 loss to the firms' respective average payout per claim in the bear scenario. FWIW, the MBA currently projects housing prices to increase by 4% in 2020 and 2.9% in 2021.

In an effort to be more realistic, I am now flexing the P/T BV ratios under the 3 scenarios, but I am confident that once we obtain additional clarity over time that these ratios will go back to their pre-COVID-19 averages.

I continue to expect +75% upside for the PMIs from current levels over the next 12 months.

Disclosure: I am/we are long MTG, RDN, ESNT, NMIH. I wrote this article myself, and it expresses my own opinions. I am not receiving compensation for it (other than from Seeking Alpha). I have no business relationship with any company whose stock is mentioned in this article.

Follow Western Edge and get email alerts
+
Add a comment
Disagree with this article? Submit your own.
To report a factual error in this article, click here.
Your feedback matters to us!