The ethanol sector's volatility has diminished in recent weeks following a major Q2 rally in response to the reopening of state economies.

Ethanol investors are waiting on two important decisions from the EPA on the volumes of biofuels that it will require to be blended with refined fuels in 2021.

The EPA's decisions had appeared clear-cut as recently as March after the Trump administration opted not to appeal a federal court ruling that it had unlawfully weakened the mandate.

Refiners recently requested for past volumes to be retroactively reduced, however, potentially having a negative effect on the 2021 volumes in response.

The ethanol sector's outlook will be dependent on the EPA's upcoming decisions on both the mandate's 2021 biofuels volumes and the retroactive reduction request.

The share prices of U.S. ethanol producers Aemetis (AMTX), Green Plains (GPRE), Pacific Ethanol (PEIX), and REX American Resources (REX) have largely marked time in June thus far, avoiding much of the volatility that has affected the U.S. merchant refining sector (see figure). Ethanol producers' share prices rallied strongly between late March and early June as states began to reopen from the lockdown orders that went into effect in late Q1 as the COVID-19 pandemic arrived in the U.S. The ability of their shares to continue advancing will depend heavily on two upcoming decisions from the U.S. Environmental Protection Agency [EPA] involving the federal biofuels mandate, and investors are waiting to see how the situation plays out.

Demand for fuel ethanol in the U.S. is supported by the revised Renewable Fuel Standard [RFS2], which mandates the blending of ethanol and other biofuels with refined fuels prior to consumption. The mandate's requirements are largely imposed on refiners to fulfill, and merchant refiners in particular have been outspoken in their opposition to it since 2013. On two separate occasions the EPA, which is tasked by Congress with implementing the mandate, took steps to unilaterally weaken the mandate and reduce the burden on refiners. In both instances the EPA's actions were later held by federal courts to have been unlawful, however, and earlier this year it appeared that the Trump administration was on the verge of allowing the full mandate as enacted by Congress to be implemented.

The EPA establishes the volume of biofuels that must be blended with refined fuels on an annual basis. In late Q2/early Q3 of the preceding year it releases proposed volumes for the different biofuels categories. These are then finalized in a final rulemaking that is normally released the following November. Importantly, this final rulemaking converts the absolute volumes established by Congress into a percentage mandate based on expected refined fuels demand.

The Renewable Volume Obligation [RVO] rulemaking for 2021 will be an especially important one due to its timing. Ethanol producers experienced a high amount of demand disruption in late Q1 and Q2 due to the fact that gasoline demand collapsed after the rulemaking for 2020 had been finalized, causing mandated ethanol demand to be a percentage of ongoing gasoline demand rather than the absolute volumes established by Congress. The COVID-19 pandemic is no longer an unknown variable, though, meaning that compliance with recent court orders would require the EPA to impose the absolute blending quotas set by Congress on refiners in 2021. Moreover, these court orders further require the EPA to reallocate the biofuel gallons that the EPA unlawfully voided in the past to future years, such as 2021.

The 2021 RVO therefore has been expected to restore ethanol demand to its statutory levels or higher regardless of what analysts believe will happen to refined fuels demand in that year. This would entail a full demand recovery, and perhaps even additional growth, for producers by next year. Ethanol producers have been closely watching for the proposed 2021 RVO volumes to be released to confirm that this mandated demand recovery will actually occur.

Earlier this month refiners played a wild card when they asked the EPA to retroactively award refiners with exemptions under the mandate for the 2011-2018 period. The EPA is able to allocate so-called "hardship waivers" known as Small Refinery Exemptions [SRE] to qualifying refiners that void part or all of their blending obligation for a given year. All U.S. refiners received these exemptions in the mandate's first year, but the number of SREs awarded fell to seven in 2015 (the final year in which the Obama administration made the allocation decisions). The Trump administration reversed course and awarded large numbers of exemptions to refiners, reaching 35 for 2017 and 31 for 2018 (see figure). These exemptions effectively reduced the total blending mandate by almost two billion gallons of ethanol-equivalent in 2017 alone. 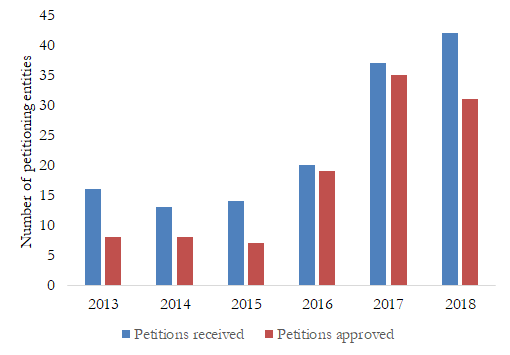 To the surprise of many, earlier this year a federal appellate court ruled that most of the SREs that have been awarded since 2011 should not have been. Specifically, the court held that SREs can only be awarded to a qualifying refinery that received SREs in the prior year as well. This would have effectively ended the SRE program due to the small numbers that were awarded in the later years of the Obama administration. The recent request for the retroactive awarding of SREs is an attempt by refiners to establish a continuous chain of allocations that would allow many refineries to continue to receive SREs in the future, the recent legal loss notwithstanding.

Data recently published by the EPA shows just how extensive the refiners' latest requests have been. The EPA received 52 petitions for retroactive exemptions, or more than the Obama administration awarded in total during its second term. This creates two major issues for ethanol producers. First, if the EPA were to retroactively award exemptions, would it require the corresponding reduction to the mandate to be reallocated to 2021's volumes? Second, would the federal courts allow any retroactive exemptions, which would be using a technicality to effectively void multiple court decisions, to stand? Given that it normally takes the federal courts 2-3 years to make a ruling on RFS2 questions, the second question is likely moot. An affirmative response to the first question, on the other hand, would have a very negative effect on ethanol demand.

The ethanol sector's outlook heavily rests, then, on the EPA's upcoming decisions on the 2021 RVO volumes and the petitions for retroactive SREs. The sheer number of petitions for retroactive awards that we now know have been submitted by refiners mean that ethanol demand could potentially be much lower in 2021 than initially expected, although such a move by the EPA would defy recent court decisions. Investors can expect the proposed 2021 RVO volumes to be released in the coming weeks, and these will be closely scrutinized for evidence of the EPA's thinking on retroactive SREs. The timing of a decision on the retroactive SRE petitions is less certain, as the EPA has yet to rule on earlier petitions that it received for 2019. Either way, ethanol investors can expect volatility in producers' share prices to resume as the EPA announces its decisions.

Disclosure: I am/we are long REX. I wrote this article myself, and it expresses my own opinions. I am not receiving compensation for it (other than from Seeking Alpha). I have no business relationship with any company whose stock is mentioned in this article.

Follow Tristan R. Brown and get email alerts
+
Add a comment
Disagree with this article? Submit your own.
To report a factual error in this article, click here.
Your feedback matters to us!