nCino (NASDAQ:NCNO) has filed to raise $100 million in an IPO of its common stock, according to an S-1 registration statement.

The firm provides a suite of online-only software tools to banks and credit unions in the U.S.

NCNO is growing revenue quickly and making progress toward operating break-even as it expands in a growing industry.

I’ll provide an update when we learn more about the IPO from management.

Wilmington, North Carolina-based nCino was founded to develop cloud-based financial software to assist financial institutions in serving their customers in an efficient and modern manner.

Management is headed by president and Chief Executive Officer Mr. Pierre Naude, who has been with the firm since its founding and was previously Divisional President of S1 Corporation and Vice President and Managing Partner of Unisys.

Below is a brief overview video of the firm's product offerings:

nCino’s partners or major customers include:

The company’s primary offerings include:

nCino has received at least $288 million from investors including Insight Partners, Salesforce (CRM), and Wellington Management.

nCino markets its offerings on what is called a 'land and expand' basis, where a sale is made for a limited set of software tools and the firm seeks to expand its sold offerings within the financial institution as it produces successful outcomes in the first implementations.

Sales & Marketing expenses as a percentage of total revenue have been dropping as revenues have increased, as the figures below indicate:

The Sales & Marketing efficiency rate, defined as how many dollars of additional new revenue are generated by each dollar of Sales & Marketing spend, has risen to 1.2x in the most recent reporting period, as shown in the table below:

The firm’s ACV-based retention rate by year is shown in the chart below: 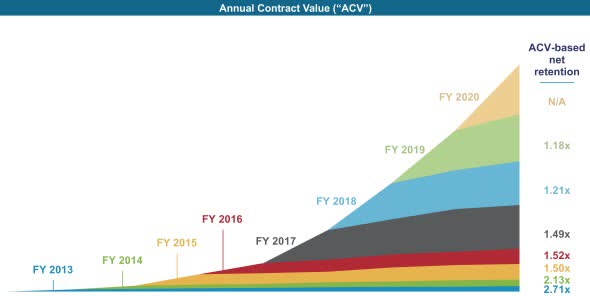 The most recent full year cohort, that of 2019, indicates an ACV-based net retention rate of 118%. Anything over 100% is considered good, since that shows negative net churn, at least based on the annual contract value to the firm.

According to a 2019 market research report by Gartner, the global market for financial institution IT spending was $63 billion in 2018, of which 29%, or about $18 billion, was for vertical-specific software.

Gartner also estimates that the demand for cloud-based delivery of software to financial institutions will grow at a CAGR of 17% from 2018 to 2023, reaching $29 billion in total value by the end of 2023.

Also, management commissioned a study by Grata that estimated the firm's serviceable market at more than $10 billion.

The breadth and depth of nCino’s offerings may give it an advantage in a market where vendor bloat may be seen as a negative due to increasingly complex integration overhead.

nCino’s recent financial results can be summarized as follows:

Below are relevant financial results derived from the firm’s registration statement:

nCino intends to raise $100 million in gross proceeds from an IPO of its common stock, although the final amount may differ.

The principal purposes of this offering are to create a public market for our common stock, facilitate access to the public equity markets, increase our visibility in the marketplace and obtain additional capital to support further growth in our business. We intend to use the net proceeds we receive from this offering for general corporate purposes, including working capital and capital expenditures such as additional office facilities.

Management’s presentation of the company roadshow is not yet available.

nCino is seeking public expansion capital as it seeks to continue its growth in a modernizing financial institution market.

However, cash used in operations is increasing, leading me to wonder as to the degree of progress.

The firm’s annual contract value retention rate was 118% in the most recent calendar year, a good result indicating its sales & marketing efforts are efficient and there is good product-market fit.

The market opportunity for helping U.S. financial institutions modernize and digitize their operations and marketing is large and expected to grow considerably in the years ahead, so the firm has enviable industry prospects in its favor.

I’ll provide an update when we learn management’s pricing and valuation assumptions.