Compañía Cervecerías Unidas S.A. (NYSE:CCU, CCU.CI) is a beverage producer based in Chile. It was established on January 8, 1902, following the merger of two existing breweries, one of which traces its origins back to 1850, when Mr. Joaquín Plagemann founded one of the first breweries in Chile (in Valparaíso). In addition to beer, CCU produces soft drinks, mineral water (since the 1960s), wine (since 1994), pisco (since 2003), and rum (since 2007).

In 2019, CCU generated 64% of sales in Chile, 25% in its international operations (Argentina, Bolivia, Paraguay, and Uruguay), and its wine segment accounted for the remainder of sales.

Chile’s market continues to grow and the company continues to take share. CCU’s volume share increased by 220 basis points over the past four years, from 41.6% in 2015 to 43.8% in 2019. Its major competitor in Chile, Ambev (ABEV), is having a difficult time connecting with customers and is losing share in almost all its markets. Despite its market share losses, Ambev is aggressive in Chile and is expanding capacity.

Over the past four years, CCU’s sales grew by 6.4% per year, with volume and ASP increasing at a CAGR of 4.1% and 2.2%, respectively. The company’s top line growth allowed it to keep up with raw material prices, foreign exchange movements, and operating expense inflation, leading to gross profit growth and operating profit growth similar to top line growth. The growth in sales, gross profit, and operating margin came while the company’s capex was similar to depreciation, indicating investment was primarily maintenance capex rather than growth investments.

CCU was able to maintain its margins in the Chilean business. Its Chilean gross margin declined from 54.8% in 2015 to 53.6% in 2019, which the company made up for with lower operating expenses, leading to a stable operating margin averaging 16.9% from 2015 to 2019. Pre-tax operating ROA increased by a small amount and averaged 15.9% over the past five years. Pre-tax operating ROA increased from 18.5% in 2015 to 25.2% in 2019, driven primarily by an increase in the equity multiplier.

Within Argentina, the company is the exclusive producer and distributor of the Heineken, Amstel, Sol, Grolsch, Warsteiner, and Miller beer brands. It is also the exclusive distributor of imported Kunstmann and Blue Moon beer brands. From Argentina, CCU exports Imperial to Uruguay, Schneider, and Heineken to Bolivia, Paraguay, and Uruguay. In Paraguay and Bolivia, the company has a license to distribute beer under the Heineken brand.

In Uruguay, CCU produces and distributes mineral and flavored bottled water under the Nativa and Nativa MAS brands, carbonated soft drinks under the Nix brand, juices under the Watt's brand, isotonic beverages under the FullSport brand, and it has launched an energy drink under the Thor brand. Watt’s juice and Full Sport is exported from Paraguay to Uruguay.

In Paraguay, CCU produces and distributes carbonated soft drinks under the brand Pulp, Puro Sol for juices, La Fuente for waters, and Zuma for flavored water, and it has been granted the license to produce and distribute juice under the Watt’s brand. In addition to imported beer distribution in Paraguay, the company entered into craft beer market production with the Sajonia brand.

In Bolivia, CCU produces and distributes beer under the brands Real, Capital, and Cordillera, and carbonated soft drinks under Mendocina, Free Cola, Sinalco, and Malta Real.

Gross profit growth and operating profit growth was well behind sales growth due to the decline in the Argentinean peso. Sales are in Argentinean pesos, while raw materials are in Chilean peso and US dollars. High inflation in Argentina is also going to distort the capex/depreciation ratio, as the newer expenditures are at a higher rate than depreciation based on older assets.

The gross margin declined due to Argentina’s inflation and currency issues. Gross margin is not significantly different from Chile, but operating expenses as a percentage of sales are much higher, leading to a lower operating margin. Over the past five years, the international operating margin averaged 6.4%, while operating margin in Chile averaged 16.9%. The difference in operating expenses to sales is directly related to the company’s competitive position in the markets. Over the last five years, CCU’s average volume share in Chile was 42.8%, while in international markets, it was 15.0%. Beverages are an industry with economies of scale in procurement, production, distribution, and marketing. In industries with economies of scale, market share drives profitability.

Within international markets, the company’s growth and profitability measures are extremely volatile due to the importance of Argentina and its current economic, inflation, and foreign exchange issues.

CCU’s wine segment produces and markets a full range of wine products for the domestic and export markets. Its products reach over 80 countries. CCU’s main wine subsidiary, VSPT, is composed of six different wineries in Chile and two in Argentina. Its main vineyards are located in Molina, approximately 200 kilometers south of Santiago. The VSPT estate in Molina is one of the largest single-site vineyards in Chile with an area of 1,057 hectares. As of December 31, 2019, VSPT’s vineyards covered an aggregate of 3,918 hectares in Chile, distributed among 10 different plantations. The winery also has 336 hectares under long-term leases. In Argentina, VSPT has another 826 planted hectares located in the province of Mendoza and San Juan.

CCU estimated its volume share declined by 30 basis points over the past four years, with volume share declining from 18.0% in 2015 to 17.7% in 2019. In 2019, the company estimates it accounted for 29.9% of total domestic volume and 12.3% of total Chilean wine exports. The wine industry is very fragmented.

Within the wine business, CCU was able to grow sales by 2.9% per year, with volume growing by 0.9% and ASP growing by 2.0%. Gross profit did not grow from 2015 to 2019, while operating profit declined by 3.7% per year. The operating profit decline came as the company invested heavily in the business, with capex-to-depreciation ratio averaging 1.85 times.

With gross profit growing slower than sales, gross margin in wine declined by 474 basis points over the past four years with a lot of variation during the period. Operating expenses to sales decreased by a small amount, leading to operating margin declining by 397 basis points over the period. Asset turnover is much lower in the wine segment, as the business requires vineyards, which leads to a much lower pre-tax operating ROA compared to Chilean operations. Despite CCU’s dominance in the domestic markets, wine is a much more competitive and capital-intensive business. If the company can grow the business, there is no reason to believe it will ever achieve excess returns. 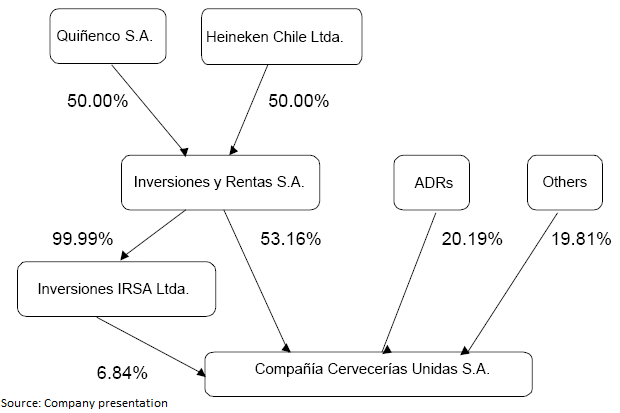 Quinenco and Heineken are the largest owners of CCU. Via a 50/50 JV, together the two entities own a total of 60% of the shares outstanding. The remaining 40% of shares are free float. The ADRs and the local listing have similar liquidity. Over the past month, the local listing average daily trading volume was USD3.4 million, while the average daily trading volume was USD3.1 million. The ADR ratio is 2-to-1.

At the end of Q1 2020, CCU was in a healthy financial position, with net debt-to-EBITDA at 0.35 times. Over the past five years, the company’s average dividend payout was 68.8%. There are several related-party transactions, which are not material.

CCU is valued using the blended average fair value per share of a discounted cash flow and residual income model. The model has a five-year forecast period before fading to a terminal value in the tenth year. The company is valued under three scenarios. Under all scenarios, the fair value per share is discounted by 5% to account for the current pandemic. The value assumptions that are stable in each of the scenarios are the discount rate at 10%, the tax rate at 25%, and invested capital turnover at 1.3 times below the historical average of 1.4 times.

The dynamic assumptions under the three scenarios are sales growth and operating margin. Over the past four years, sales grew at an average pace of 5.0% per year. Under the bases case, sales continue to grow at a similar pace to the historical growth rate of 5% over the next five years, before fading to 2.5% in the terminal year. The bear case assumes 0% growth into perpetuity, while sales grow by 10% per annum over the next five years before fading to the 2.5% growth rate in the terminal value.

Economic concerns are a risk for CCU. Argentina is the company’s biggest market outside of Chile. The country has suffered recessions, high levels of inflation, currency devaluations, and significant economic decelerations in various periods of its history. During 2016, Argentina's GDP contracted by 2.1% and inflation was close to 40%. In 2017, GDP growth was 2.7% and inflation was close to 20%, showing a slight recovery in the economy. However, in 2018, Argentina once again entered into a recession and its GDP decreased by 2.5% and accumulated inflation reached 47.6%, while in 2019, the Argentine GDP contracted by 2.2% and inflation reached 53.8%. Consequently, given that the cumulative inflation rate exceeded 100% over the last three years, Argentina was deemed to be a hyperinflationary economy as of July 1, 2018.

While economies of scale exist within the beer industry, there are no demand-based competitive advantages, meaning customers often switch between brands and can be lured from one brand to another. When customers can be acquired from competitors, there is a risk of the competitive environment intensifying and competitors heavily spending on marketing or discounting prices, which would impact growth and profitability. If consumers no longer favor CCU’s brands, its growth will be impacted. The fixed costs that create operating leverage will negatively affect profitability at a greater pace than any revenue lost.

Reperio Capital
169 Followers
Reperio Capital Research is an independent research provider within Emerging Markets. I highlight one company a week, primarily in Latin America. Each company's business, operations, and management are objectively analyzed. Valuation and investment recommendations are provided for subscribers, but the primary purpose is to analyze businesses.An annual subscription is $499 per year or less than $20 per report. Subscribers get access to recommendations, valuations, and can request companies to research.https://www.reperiocapital.com/home3/Wordpress/aboutReperio Capital is run by Marc Melendez, CFA, who has over 15 years experience as a fundamental bottom-up analyst within Emerging Markets. https://www.reperiocapital.com/home3/Wordpress/bio