The monthly jobs report is not an accurate portrayal of labor market health.

The unemployment rate is double what the Bureau of Labor Statistics estimates.

The labor market continues to deteriorate, as the economy is withering on the vine.

There are two sets of jobs numbers out there. One shows an economy that has already hit bottom and is starting to rapidly recover. The other shows a continued deterioration in economic conditions. Relying on the right set of numbers is critical in making an accurate call about the direction of the overall economy. It should also have some bearing on the direction of financial markets, provided the two reconnect at some point in the future.

The Bureau of Labor Statistics tells us that we have recovered 7.5 million jobs over the past two months and that the unemployment rate has fallen to 11.1%. Considering how dire things were in April when the economy lost more than 20 million jobs, these are phenomenal results. The problem is that the BLS is providing us with a backward-looking estimate of job creation that has been horribly inaccurate at turning points in the economy in the past.

A more accurate and real-time assessment of the labor market can be found in the weekly initial unemployment claims report, but even that has been misconstrued by the bullish consensus. While it is true that initial unemployment claims have been gradually declining each week to what was 1.3 million for the week ending July 4, this figure only accounts for state benefits. When we include the workers filing claims under Pandemic Unemployment Assistance (PUA), which is the federal program for the self-employed, independent contractors and gig workers who can't quality for regular benefits, the numbers are rising. The number of claims filed last week under the PUA rose to 1,038,905, so the total number of initial claims has risen over the past four weeks. 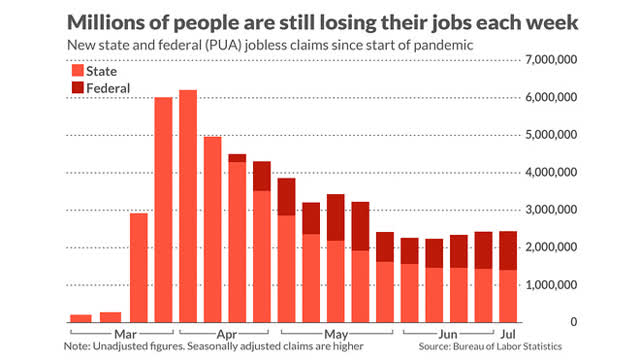 It was also reported yesterday that continuing claims fell 700,000 to 18.1 million, but that is a misrepresentation as well. The number of workers continuing to file claims under the PUA program rose to approximately 14.4 million, bringing the total filing continuing claims to 32.5 million.

Additionally, the situation is getting worse. As workers are being rehired for low-paying service sector jobs, higher-paying positions are starting to be shed in large numbers. Wells Fargo (NYSE:WFC) is expected to eliminate tens of thousands of jobs before year end to dramatically cut costs. Harley-Davidson (NYSE:HOG) announced yesterday that it would be eliminating 700 jobs as part of its restructuring. United Airlines (NASDAQ:UAL) is expected to lay off as many as 36,000 by October. Meanwhile, a fiscal cliff approaches at the end of the month when enhanced unemployment benefits are scheduled to end.

Stimulus may help keep the economy and markets afloat in the short term, but without steady job creation and income growth, an economy that is dependent on consumption will wither on the vine.

Lots of services offer investment ideas, but few offer a comprehensive top-down investment strategy that helps you tactically shift your asset allocation between offense and defense. That is how The Portfolio Architect compliments other services that focus on the bottom-ups security analysis of REITs, CEFs, ETFs, dividend-paying stocks and other securities.

The Portfolio Architect was defensively positioned at the beginning of this year in anticipation of the bear market that followed, but were you? If not, consider a two-week free trial to see how it may help you be better positioned for the next major turning point in the markets.