High quality, rapidly growing businesses can deliver transforming wealth to investors if they are held for an extended period of time.

Investors are fearful that a lack of profitability or high volatility are worrisome indicators of a company's prospects.

Taking some time to better understand the characteristics of high growth businesses may lead to more consistent outcomes in investment.

As investors, we often find ways to gravitate to businesses in distress. We tell ourselves that the decline in earnings of a business like GE (GE) is only temporary, or that things will eventually pick up for some other poorly returning company.

Unfortunately, while we manage to talk ourselves into keeping and retaining poor businesses, we're also very adept at cheating ourselves out of very good businesses. The reasons are numerous and not necessarily easy to spot. I should know, I've fallen victim to a number of these myself!

A loss making business strikes fear into the heart of many investors. Don't get me wrong, in certain instances, a business that is heavily losing money and is not profitable is a major warning sign. As someone who was previously a very avid dividend growth investor, I had to "unlearn" that any business which doesn't consistently grow profits is bad.

This focus on consistent, increasing profitability created meaningful problems for me in trying to understand rapidly growing businesses like Amazon (AMZN), which seemingly never made any money but whose share price was constantly racing higher year after year. Strong reinvestment into Marketing and R&D suppressed profits but couldn't mask the strong cash generation that was just being reinvested back into the business. 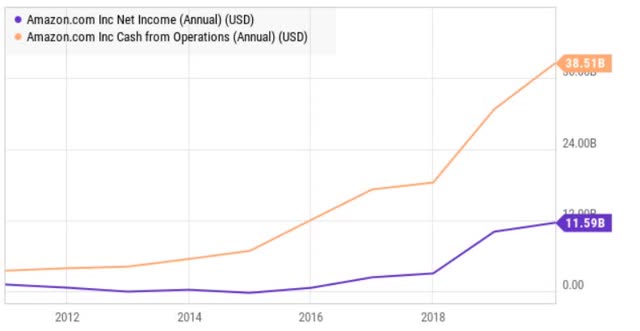 Other emerging wealth creators have learned their lessons from Amazon very well. While a few of the high growth franchises that I own such as The Trade Desk (TTD) and Paycom (PAYC) are substantially profitable and generate large returns on invested capital, these are a rarity.

In general, the common feature of many of the high growth businesses that feature in the Sustainable Growth Service such as Twilio (TWLO), Alteryx (AYX), and Zscaler (ZS) are making constant investments to build product extensions which increase the hold on existing customers or to acquire customers that won't be able to leave their mission critical services. SaaS ("Software as a Service") business models further exacerbate the lack of profit; expenses are recognized upfront and revenues earned over the customer life, which make value creation difficult to see. All 3 business can be seen as optimizing the business for revenue growth, with large investments that have minimized net income. 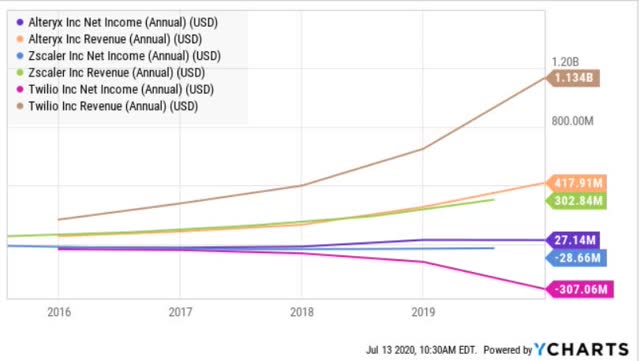 However Twilio, Alteryx and Zscaler customers continue to increase spend almost 40% annually on these services. All 3 businesses have been massive wealth creators over the last 5 years. 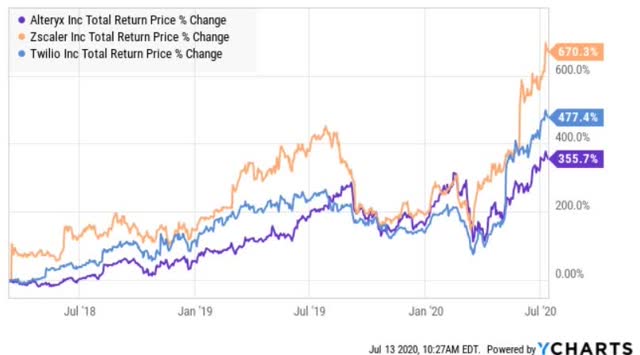 In spite of the relative lack of profitability, there is market dominance in the making right here.

Fear #2 I'm late to the game, the stock has already doubled in 2 years!

Ever had your eye on a stock, only for it to skyrocket in a very short period? This has happened to me, several times. What I missed at the time was that just because the stock has rapidly appreciated in price, it doesn't mean that it can't double or triple again. Mastercard (MA) was one I sold in 2008 only to watch in dismay as the price doubled over the next few years. 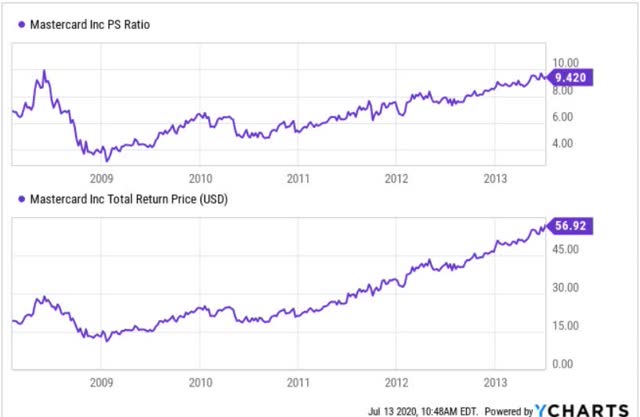 I had missed the point that the business had an extremely long runway of secular growth and that the stock could continue posting strong numbers year after year. Also not obvious was that Mastercard was not necessarily 'more expensive' in 2012 when I looked at it again. The business had roughly the same Price to Sales, even though it had doubled. Consistent revenue growth explained the strong share price. However what has doubled can double again!. The stock has tripled in the last 5 years of holding. Learning from past mistakes can be rewarding!

Fear #3 It's too volatile - this chart makes me sick!

The high beta's of really fast growing, high-quality businesses mean that they don't make themselves easy to hold. I have first-hand experience of this myself with my long-term holdings of Atlassian (TEAM), which was bought in early 2016 and has been in my personal portfolio for close to 4 1/2 years. While it has increased over 8x in the years I have held the businesses it has had no less than 15 declines of 20% or more in that time. 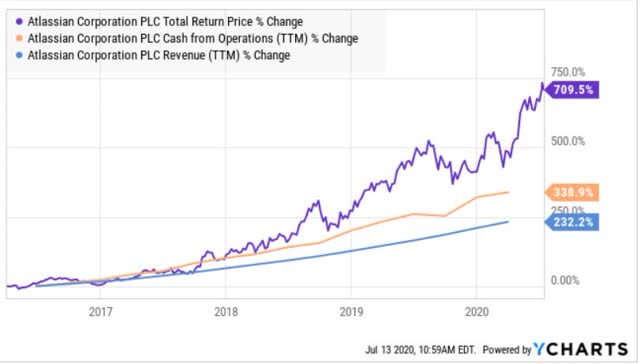 So how should you deal with volatility? The key is to track the right things. Rather than being distracted by a quarterly earnings miss or an increase in short interest, my "northstar" for my Atlassian investment has been cash flow and revenue growth, which have been remarkably consistent in spite of market gyrations.

Fear #4 It's too expensive - Who values something on a Price to Sales multiple anyway?

When I first transitioned from being a dividend investor to one that was more focused on growth, some of the valuation multiples on many of the businesses that I looked at were quite scary. 10x Sales on a business like MercadoLibre (MELI) or 13x Sales on a position like Atlassian were quite different propositions to 20-30x earnings for Johnson & Johnson (JNJ) or Procter & Gamble (PG).

Price to Sales is a common proxy for company valuation in the absence of earnings in the venture capital space. Quality businesses not only retain, but can also expand these multiples. With strong revenue growth, this can lead to very impressive compounding for these businesses. 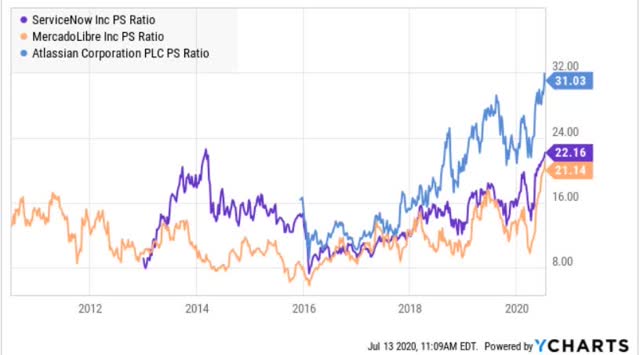 Even in a business like Facebook (FB) where the price to sales multiple contracted by 50% since 2013, if revenue generation is strong, that will still lead to a good result, or 4X returns in Facebook's case.

Fear #5 The owners have all the voting stock, I may get no say!

Many of the exceptionally good, high growth businesses that I'm invested in or interested in have an unusual listing structure.

Among the companies that I own, Alphabet (GOOG)(GOOGL), Facebook, Twilio, Workday (WDAY), The Trade Desk and Veeva (VEEV) all have dual class stock which concentrate the bulk of voting rights in a restricted, tightly held share class, with the common stock owners receiving lesser voting rights. The common theme among all of these businesses is that there is still some element of founder control or founder involvement in the business. Clearly, the element of dual voting structure hasn't hurt the performance of at least these names. 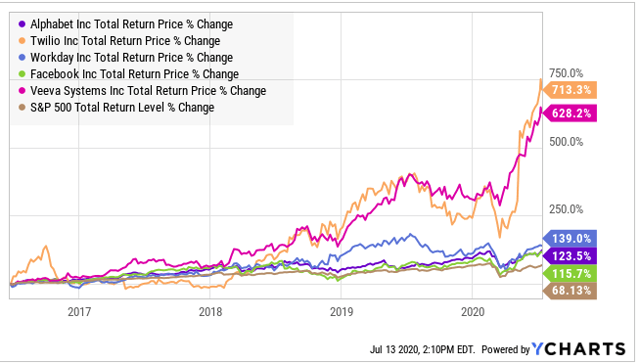 Some view this as potentially problematic. I couldn't disagree more. Typically, founders continue to retain very large and meaningful equity stakes in their respective businesses even once they are listed.

Marcos Galperin of MercadoLibre for instance continues to own roughly 10% of the business. Mark Zuckerberg owns almost 30% of Facebook stock. In addition to these large voting blocks of equity which align the interests of retail shareholders and founders, founder management tends to be more longer-term oriented in nature, which means that they are less likely to engage in the gamesmanship that hired corporate managers do to meet short-term quarterly earnings goals and option vesting targets.

This results in a higher quality of decisions being taken for the long-term interests of the business. As I discussed in my recent article, The 5 Elements That Make For An Outstanding Business, studies have found that owner run businesses typically have much better share price performance than businesses where there are corporate managers. 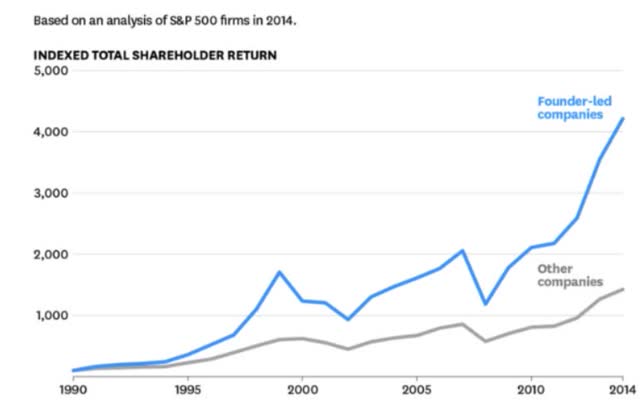 Fear #6 An aversion to 'averaging up'

In a recent article, Pause, Before You Hit That Sell Button, I discussed the fact that a relatively small number of stocks ultimately account for outsized returns. A study by Hendrik Bessembinder found that just 4% of stocks are ultimately responsible for the S&P 500 (SPY) having greater long-term returns that exceed treasury bonds. 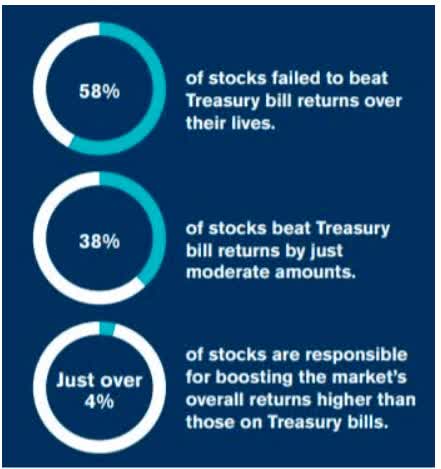 The converse of being too quick to sell winners is also true. Investors cheat themselves out of potentially excellent businesses by not being willing to "average up" and own more of a business that's proven itself to be a winner.

I myself experienced the same phenomenon in my own portfolio. In late 2015, I acquired a reasonably meaningful stake in MercadoLibre for the Project $1M portfolio, which was purchased at a price of $98 a share. MercadoLibre today trades at over $1,000 per share, making this business an elusive '10 bagger' in less than five years. However, I myself fell victim to fear #3, when a vicious bout of volatility in the stock got me to divest 50% of the position.

However, a couple of years later, having been impacted by Fear #2, (yes the stock really did double in the two years that I sold out part of the holding!), I managed to build up the nerve to buy back the divested shares, at more than double the price. I had a lot of psychological hesitation about doing that, and it wasn't just the fact that the position had doubled. I also hesitated at the thought of reducing that "percentage gain" that the position would show. I'd no longer have the clean 200% gain on the position and would show something substantially less (who says investing isn't all in the mind!).

In fact, MercadoLibre was actually a far better business two years later than when it was when I first bought it. The company had added significantly more users and significantly more merchants in the period of time since I had divested my partial stake. It was much more resilient, with users and merchants now less likely to leave.

I ultimately ended up buying back that partial stock I sold in 2017 at a little over twice the price at $270 a share. Am I disappointed that I traded what would've been a smaller 10 bagger for a much larger 7 bagger? No! (and you can see details of the current holding in the latest portfolio update)

As investors, we want to come up with many reasons and justifications not to own really high-quality businesses. These tend to generally be immaterial things such as concerns over short-term stock volatility, not understanding that certain businesses are in an investment phase and are therefore not optimizing for profit, and even more psychological things such as not being willing to own a high-quality business because it's had a rapid run up in price.

In the process, we cheat ourselves out of exceptionally good businesses that can end up being material wealth creators. Taking some time to do a little bit of due diligence and further understand the reasons for why things are the way they are can spare investors the heartache of missing out on a sustainably growing, long-term wealth creator. Even if you have found you have 'cheated yourself' out of a couple of wealth creators, all is not lost. You can still make a few errors along the way and still come out with a very good result.

If you are interested in uncovering other sustainable high growth prospects please consider a Free Trial of Sustainable Growth. Prices will increase to $349 yearly at the end of August. Lock in your discounted rate!

Disclosure: I am/we are long AMZN, AYX, TEAM, MELI, TWLO, NOW, FB, GOOG, MA, PAYC, TTD. I wrote this article myself, and it expresses my own opinions. I am not receiving compensation for it (other than from Seeking Alpha). I have no business relationship with any company whose stock is mentioned in this article.

Follow Integrator and get email alerts
+
Add a comment
Disagree with this article? Submit your own.
To report a factual error in this article, click here.
Your feedback matters to us!