It is commonly thought in investing that one can only achieve superior returns by taking on high risks. However, with pre-merger SPACs, one could theoretically achieve high returns with minimal risks.

To understand this opportunity, you have to understand how SPACs work. A SPAC, like a normal IPO, raises money from investors to purchase a company and bring it to the public markets. There are 3 phases that most SPACs go through – pre-merger, merger announcement, and post-merger.

During the time it takes to find a target, a SPAC will usually trade near its cash value, which is usually close to $10. After announcing a solid deal, however, investors will evaluate the deal and usually bid the SPAC up. During this phase, since investors can still redeem their $10 in cash, the SPAC will still usually trade above $10. The last phase, the post-merger phase, only occurs after the SPAC closes the deal and the ticker changes. This is the most controversial phase – it is why many investors are wary of SPACs. After the ticker changes, investors can no longer redeem their cash and the merger closes. Occasionally, in the case of Nikola (NKLA), DraftKings (DKNG), etc., the SPAC could continue to increase in price, but most of the time the SPAC will collapse – See Hall of Fame Resort & Entertainment Company (HOFV), Whole Earth Brands (FREE), for recent examples. Below is an example from FREE: 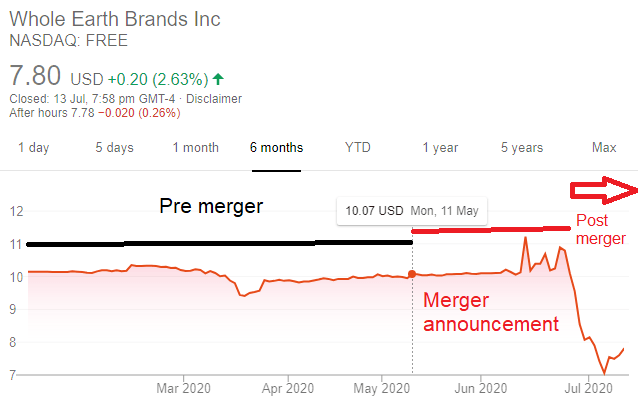 I believe that buying pre-merger SPACs, which usually trade at $10-11, and selling these SPACs after the merger announcement, could be an opportunity to generate substantial alpha. Certainly, this strategy has performed very well over the past few months.

The main reason why this is so successful is that very recently, SPACs have mostly gone up after announcing a merger target. The increase is usually higher if the target is an exciting company operating in a hot sector like online gambling or EVs, but oddly enough, even the acquisition of boring companies with slow growth can lead to an initial bump in the stock price of a SPAC. It’s not clear why this is the case but it could be due to the massive amount of liquidity in the market needing somewhere to go.

The amazing thing about SPACs is that they are required to hold the cash raised from investors in a trust until the merger is completed. This means that there is minimal downside to buying SPACs near $10, as long as you sell before the actual merger. Admittedly, it is possible for SPACs to trade below cash value in extreme scenarios, but even then, the SPAC doesn't go much below the $10 mark.

One additional factor fueling this opportunity is management incentive. SPAC management wants to see the price rise as much as SPAC investors, so they'll be incentivized to buy companies that will excite investors. One recent example could be Spartan Energy Acquisition (SPAQ), which originally was planning to invest in a fossil fuel company but eventually acquired Fisker, an EV company.

All these factors create a very interesting opportunity to generate large returns with little risk. By buying a SPAC between $10 and $11, your loss is limited to less than $1, yet you stand to generate double-digit returns if management picks an exciting company (which they are incentivized to do, as shown above).

In the last few weeks, I had put a substantial amount of my portfolio into pre-merger SPACs trading at around $10, with great success. None of the SPACs I invested in resulted in a loss, and the two SPACs which announced merger targets – CCXX and SPAQ, both saw double-digit % returns within a few weeks. SPAQ was particularly impressive, with the merger with Fisker announced just 1 day after I bought into the SPAC, which led to a 50% gain.

Currently, I still hold a substantial amount of my portfolio in pre-merger SPACs, with my current picks being SOAC, ALAC, NOVS, and KCAC.

Management is obviously the most important factor for a SPAC, as they will be the ones doing due diligence, negotiating and ultimately acquiring the target. Look especially for management with experience in private equity or managing investments in general.

In addition, I also look for SPACs that are close to liquidating, as in these cases, management would be more aggressive in pursuing a deal. This was one major reason why I bought SPAQ, which had a liquidation date less than 2 months from when I bought it. Note that if shareholders approve, a SPAC could potentially extend the liquidation date, so take this with a grain of salt. ALAC, for example, has extended its liquidation date by more than a year.

Size is the last factor I look at. I recommend avoiding very small SPACs as they have less negotiating power.

Despite the attractiveness of this opportunity, there are still risks to this strategy. Recently, more and more investors are learning about this strategy and are bidding up SPACs, particularly good quality SPACs with good management. For example, Chamath's IPOB and IPOC are both trading above $11, indicating a downside of >$1. SPACs may have lower downside than other stocks, but they're still riskier than cash.

In addition, to take advantage of this strategy, you need to know what you're doing and frequently check the newsflow around the SPACs you're holding. Failing to sell a SPAC before a merger date could lead to substantial losses, as FREE and HOFV show.

Overall, I believe SPACs could prove an attractive vehicle to park spare cash as long as this euphoric bull market continues to bid up SPACs that have announced a merger. I personally have parked a good portion of my cash into SPACs, and plan to continue doing so as long as this opportunity persists.

WY Capital
6.75K Followers
Looking out for underrated companies that could shape the future of humanity, or just provide strong returns over the long run. Note that my opinions could change after conducting more research or based on anything, honestly. DYODD

Disclosure: I am/we are long NOVS, SOAC.U, ALAC, ALACW. I wrote this article myself, and it expresses my own opinions. I am not receiving compensation for it (other than from Seeking Alpha). I have no business relationship with any company whose stock is mentioned in this article.