That’s a giant problem for employment in many sectors—and for everyone else who depends on spending by those workers and their families.

The kind of job openings tells us something, too. Hospitality and tourism are at the bottom of the list.

On the other end, “smaller than average declines” (since no sector was especially good) in job listings occurred in retail, driving, loading, stocking, beauty and wellness.

Yes, some specific areas and industries might do well. But consumer spending, consumer confidence, and business capital spending will be nowhere near normal.

A century or two ago, industries would shrink and disappear over decades, while others arose at a similar pace.

Today, consumer preferences change before our eyes. Companies and entire industries spring up overnight… and can collapse just as quickly, as we saw with the arrival of the coronavirus in America.

As recently as February, Americans were getting on planes and eating in restaurants without a second thought. Now, many are not… and don’t intend to anytime soon.

That’s a giant problem for employment in those sectors—and for everyone else who depends on spending by those workers and their families. Non-government data also suggests any jobs recovery will take time… maybe even until 2026. 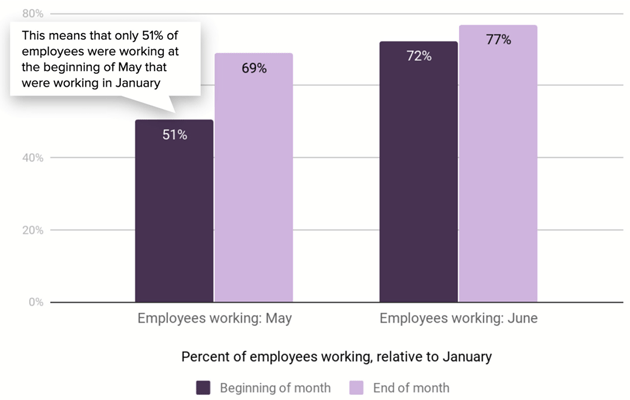 It improved considerably as businesses reopened, reaching 77% by the end of June. But in absolute terms, it remains disastrous to have 23% of workers still jobless.

The Homebase data was an early and accurate tip-off back in March, revealing a significant business slowdown even before mandatory closures. It may be doing the same now, as coronavirus cases surge across states that were in the process of reopening.

That’s bad news generally, and especially for the permanent job losers who need to find new work and those who had gotten called back, only to be cut loose again.

Indeed.com, a top job search site, is a good barometer for hiring activity. Fewer job postings mean fewer job opportunities for those seeking them. And that is indeed (pun intended) what has happened. 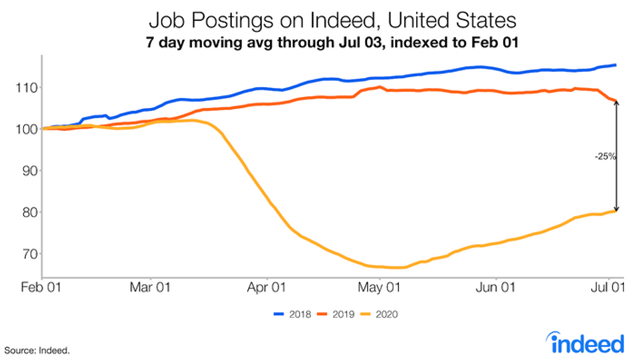 Job postings collapsed in March, bottomed in early May (consistent with the Homebase data) and have been rising slowly since them. But they remain fully 25% lower than February.

The kind of job openings tells us something, too. Indeed’s data shows which industries have the worst hiring non-activity.

As you might expect, hospitality and tourism are at the bottom of the list. Hotels are hurting badly. The fall in banking and finance listings is a bit mysterious. I suspect it might relate to mortgages, but we know banks have been closing and consolidating branches, too.

On the other end, “smaller than average declines” (since no sector was especially good) in job listings occurred in retail, driving, loading, stocking, beauty and wellness.

Those may be clues about where the economy is headed.

Retail, already changing rapidly, is now moving at lightspeed to online and hybrid distribution. “Order online and pick up at the store” is gaining popularity. Driving and warehouse work relates to this as well.

The beauty and wellness part? Obviously, most of us need haircuts. Beyond that, the virus seems to be making people pay more attention to their health. Wellness can include weight loss, nutrition, supplements, etc.

Yes, some specific areas and industries might do well. But consumer spending, consumer confidence, and business capital spending will be nowhere near normal. Neither will GDP growth.

And if we manage to recover from all that, we will still face a global recession and a slowdown in trade and travel.

Countries that have beaten down the coronavirus are understandably not going to admit travelers from places where it is rampant. This makes international commerce difficult, at best.

You might say we need to be less dependent on other countries like China, anyway. I agree. But cold turkey isn’t the best way to make that transition.

Last month I retired my longtime “muddle-through” paradigm and said we are in a stumble-through economy. Similarly, millions of workers are set to stumble through the next few years, looking for jobs that don’t exist.

They’ll be trying to gain new skills, juggling the checkbook as they try to stay afloat. Ditto for many business owners and managers.

This won’t be easy for anyone. We will stumble through, but not without some deep scratches and scraped knees.

Follow John Mauldin and get email alerts
+
Add a comment
Disagree with this article? Submit your own.
To report a factual error in this article, click here.
Your feedback matters to us!