GE (NYSE:GE) has been pummeled in 2020, but that may be about to change. In recent weeks, analyst estimates for the company have gradually stabilized after falling sharply in the spring. They are even beginning to rise. It could suggest that the worst is behind the stock, and perhaps shares start rising again.

Options traders are betting that happens, and the stock is beginning to regroup and move higher into the end of 2020. In the meantime, the technical trends are starting to show signs of life, suggesting the stock begins to rebound too.

You can track all of my free stories on SA, on this Google Spreadsheet I have created.

Revenue estimates fell sharply for the company starting in mid March. But since the middle of June, revenue estimates have stabilized, and have started even to tick higher just a bit. Analysts had been looking for the company to generate revenue of $91.95 billion and $93.98 billion in 2020 and 2021, respectively. Now they see revenue at $79.01 billion and $82.24 billion, respectively.

While sales are still likely to be hurt by the pandemic, and based on estimates, slow to get back to pre-pandemic levels, the stabilization is a positive sign, and perhaps an indication that the company has at least regained its footing for now.

Investors will get more details when the company reports results at the end of July. Currently, it estimated that second quarter revenue fell 40.5% to $17.15 billion. Meanwhile, the company is forecast to have a loss of $0.10 per share, which is down from a profit of $0.11 per share in 2019.

Betting On A Rebound

It could be why someone is making a rather large bet that GE's stock recovery in 2020 and rise. In recent days there has been an increasing amount of activity on August 7, $7.5 calls, with the open interest levels rising by almost 25,000 contracts. These calls were bought on the ASK for about $0.30 per contract. It means that the stock would need to increase to around $7.80 for the trader to breakeven if holding on to them until expiration. That's about 11% higher than the stock's price on July 17. 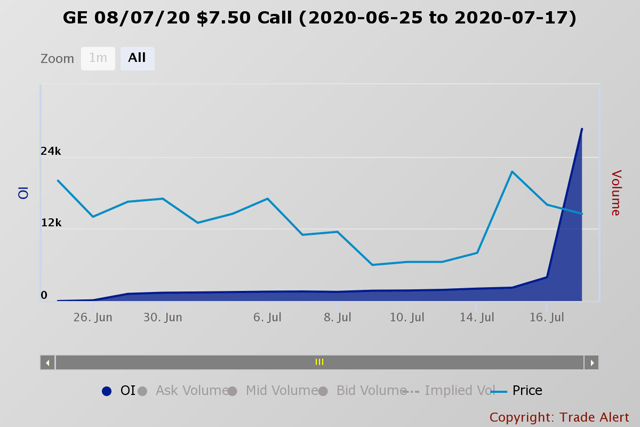 Additionally, there has been activity at the January 15 expiration date, at the $10 strike price. In this case, the open interest on the calls has risen by roughly 145,000 contracts over the past two days. On July 15, the calls were purchased for around $0.37 per contract, and on July 16, they were purchased for about $0.36 per contract. GE would need to rise by to approximately $10.37 by the middle of January for a buyer of the calls to breakeven. 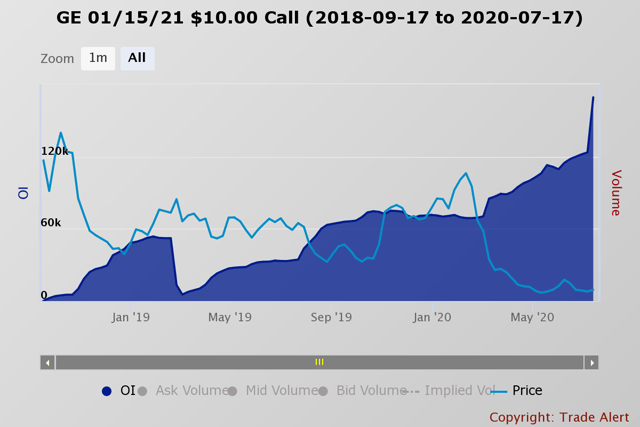 The chart shows that the stock has found a bottom of sorts with a support level of around $6.50. Additionally, it appears there may be a reverse and head and shoulders pattern forming in the stock. That's a bullish pattern, and if it is the case, the stock could have further to climb. The first level of meaningful resistance would come around $7.60 per share, then around $8.40.

The relative strength index also is is rising after hitting oversold conditions in March. That indicates that there has been a momentum shift in GE from bearish to bullish. 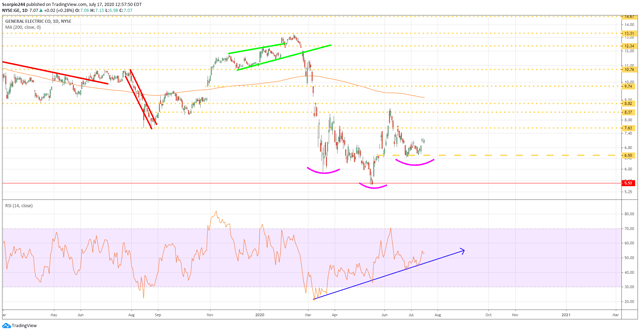 There are plenty of risk with GE, like any stock in this market. The economy is fragile, and that means the sudden uptick in unemployment or a pause in the reopening could quickly turn markets lower. It could send GE's stock back to recent lows.

It seems at this point, some are willing to take on some of that risk. 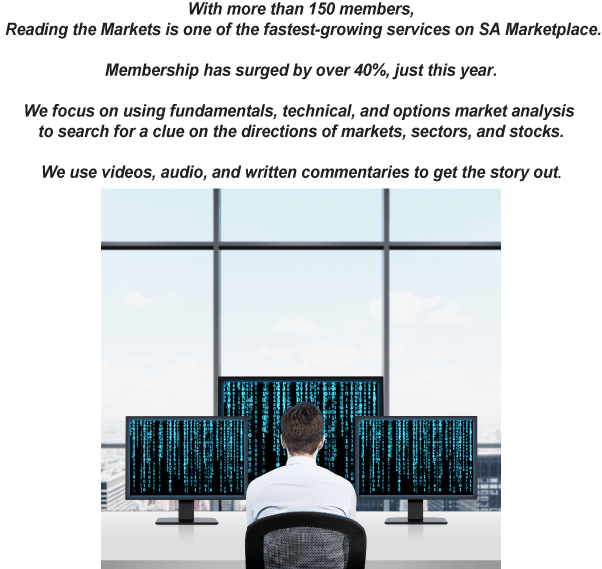