Alaska is one of the largest gold-producing states in the United States. Gold produced in Alaska is only second to gold produced in Nevada, which leads all other states by a large margin. However, Alaska is a mostly unexplored region when compared with Nevada. Alaska is six times larger than Nevada and yet has fewer operating gold mines.

Take the Donlin Mine, for example, which is a development mine with a 50/50 joint venture between Barrick Gold (GOLD) and NovaGold (NG). This mine may prove to be one of the largest gold mines in the world, and yet it is just now being developed in 2020.

I recently wrote a similar article about the active gold mines in Nevada. These articles serve as a reference and record for what the gold mining landscape looks like in each geographic region. They also serve as a great starting point for high-level analysis from which to do further research.

There are currently seven public companies that either operate gold mines or are in the exploration and development phase. If I left any companies off of the list, which I'm sure I did, please mention them in the comments section below and I will add them to the list next year. 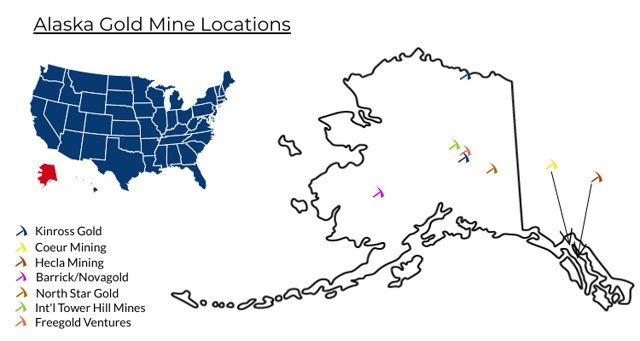 Source: Created by the author

Barrick Gold and NovaGold formed a 50/50 joint venture called Donlin Gold LLC in 2007. The Donlin Gold exploration began in 1996 and is located 10 miles north of the Alaskan village of Crooked Creek. When production begins, this may be one of the more significant gold producing mines in the world.

The Kensington Mine is located northwest of Juneau about 45 miles and is 100 percent owned by Coeur Mining. The Kensington mine is the third-largest gold-producing mine in Alaska in this list. However, the mine has the smallest amount of proven and probable reserves on the list.

Freegold Ventures owns the Golden Summit Mine, which is in the exploration and development phase. Prospects for Freegold Ventures look promising, especially considering they operate down the road from the Fort Knox mine and a once producing mine called the True North Mine, also owned by Kinross Gold. Based on their reserve report, the Golden Summit land package has indicated reserves of 1.3 million.

The Golden Summit property is located 30 miles from Fairbanks, Alaska.

Hecla Mining operates the Greens Creek mine, which it names as the "cash-generating engine" of the company. Although Greens Creek is the smallest gold producer of the gold-producing mines on this list, it is primarily a silver mine. In 2019, Greens Creek produced 9.9 million ounces of silver in addition to its gold production.

The Greens Creek mine is located in the Tongass National Forest, approximately 18 miles southwest of Juneau. The mine can only be accessed by sea.

International Tower Hill Mines operates the Livengood Mine project. It also is not far geographically from Kinross' Fort Knox and True North mines. It is located northwest of Fairbanks 80 miles in the Tintina Gold Belt. The company claims proven and probable reserves of almost 9 million ounces.

The company touts the project as the "largest North American gold-only deposit by reserves and resources not wholly owned by a Major or Producer."

The Fort Knox Mine has been in operation since about 1992. Kinross Gold became the owner of the mine when Kinross merged with Amax Gold in 1998. The Fort Knox Mine is located 20 miles north of Fairbanks, Alaska.

In 2019, the mine produced 200 thousand ounces of gold, which was the largest production from an Alaskan gold mine in 2019. The mine boasts proven and probable reserves of 2.8 million ounces.

Northern Star acquired the Pogo mine from Sumitomo Metal Mining (OTCPK:SMMYY) in mid-2018 for $260 million. This was an expensive acquisition at the time, yet in a rising gold price environment, this acquisition proved to be good timing for Northern Star shareholders. The Pogo mine is located 80 miles southeast of Fairbanks, Alaska.

In 2019, the mine produced 183 thousand ounces of gold and is projected to be Alaska's largest producing mine in 2020.

Since each company operates one gold mine in Alaska, there was no need to divide the analysis between the company and gold mine as I did for the state of Nevada. 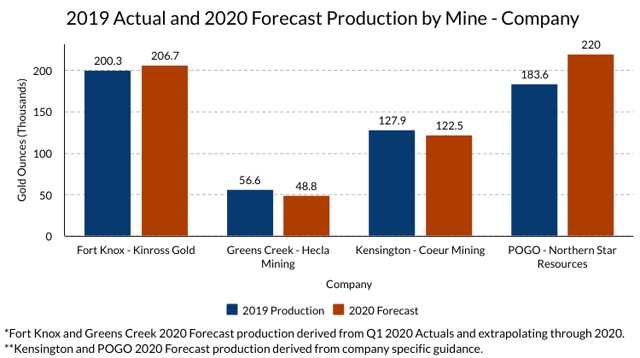 2019 Proven and Probable Reserves by Alaska Gold Mine 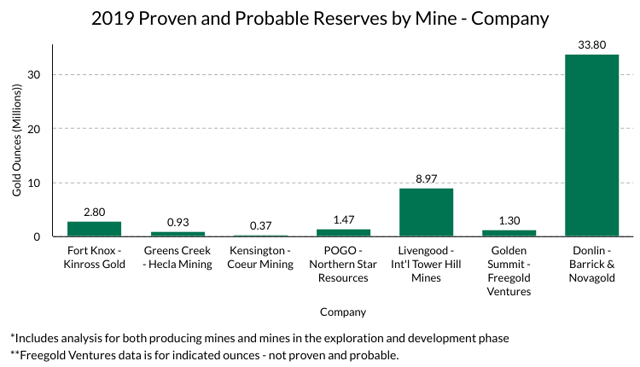 All-In-Sustaining Cost Per Ounce by Alaska Gold Mine

All-in sustaining costs (AISC) per ounce is a metric used in the mineral mining business to assign a cost to produce one unit of a mineral, in this case, an ounce of gold. This is a non-GAAP measure; so although it can be used to compare companies, there is no standard way to measure AISC, which means each company may calculate it slightly differently. 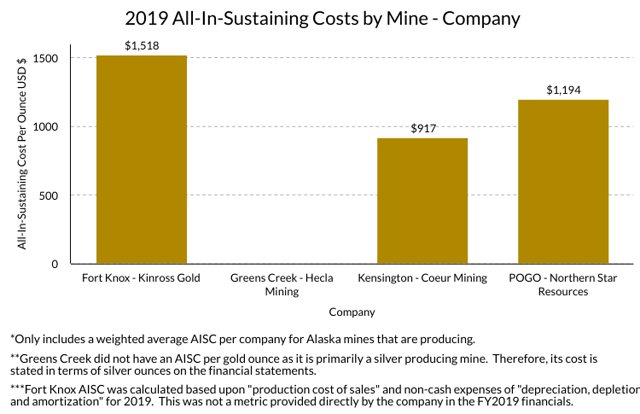 The image below clipped from Kinross' FY 2019 financial statements demonstrates how the AISC above was calculated for the Fort Knox mine. 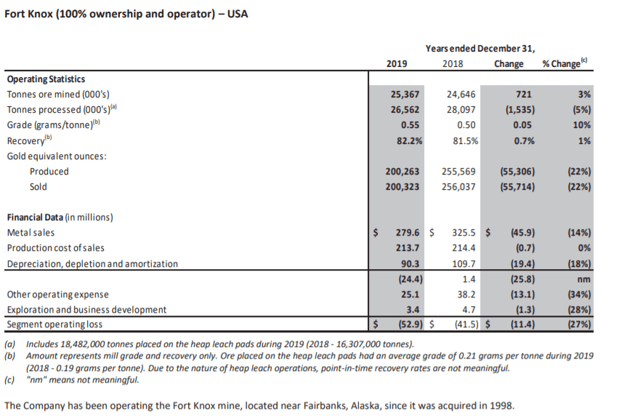 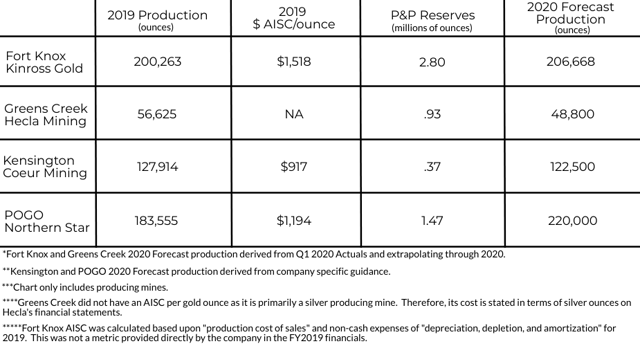 Alaska is the second-largest gold-producing state in the United States. There is much more exploration to be done in Alaska, even as one of the largest potential gold mines (Donlin) is in the development phase. Alaska is six times as large as Nevada but only produces a fraction of the production.

If you want to invest in Alaskan gold production, there are several attractive options from the large-cap multi-jurisdiction producer in Barrick Gold, to the speculative small-cap in Freegold Ventures and almost everything in between.

There are multiple companies from which to choose. This isn't enough information to invest off of, but it's a good place to begin your research and a great way to gain an understanding of Alaskan gold mining and the industry at large.

Let me know in the comments if there are any public gold mines in Alaska that I missed that need to be added to the list for 2020.

Brent Hecht
1.17K Followers
This profile focuses on gold mining research.  Although, it should be said that a better version of gold, is Bitcoin.   Bitcoin has better characteristics than gold in every way.
Follow

Additional disclosure: The author of this article is not a Registered Investment Advisor or Financial Planner. This writing is for informational purposes only. It does not constitute an offer to sell, a solicitation to buy, or a recommendation regarding any securities transaction. The information contained in this writing should not be construed as financial or investment advice on any subject matter. The author of this article expressly disclaims all liability in respect to actions taken based on any or all of the information on this writing.