Welcome to the no more tank top edition of Natural Gas Daily!

Note: This article was first published to HFIR subscribers yesterday.

In an article we published earlier this week, we noted that the bears were running out of time in trying to push natural gas prices even lower. Following a series of bearish cooling demand revisions, natural gas prices held firm which led traders to believe that prices were starting to bottom. After overnight ECMWF-EPS added five TDDs, prices shot way up today with August touching $1.8/MMBtu.

With September LNG cargoes done and traders seeing LNG feedgas flow returning to 6-7 Bcf/d, the worries about a storage tank top are starting to dissipate.

One of the key reasons for the recent weakness was the fact that if storage built at the five-year average from now to November, we would hit operational capacity. This was a scenario the market needed to avoid at all cost, so in essence, it forcibly kept Henry Hub prices low and reopened LNG export economics.

After September, LNG cargo cancellation will be minimal as exports in October would arrive at the importing countries in Nov/Dec, or when heating demand starts. So we don't see any risk of cancellations in October and beyond.

In essence, we only really have to focus on natural gas storage balance from now to the end of August. TDD changes in September and October won't be meaningful enough to move the needle and with lower 48 gas production stalling out once again, market balances should continue to tighten.

But the difference between 2020 and 2016 is that in 2016, we were much tighter on the balance front, which explained why natural gas hovered closer to $3/MMBtu than $1.80/MMBtu today. 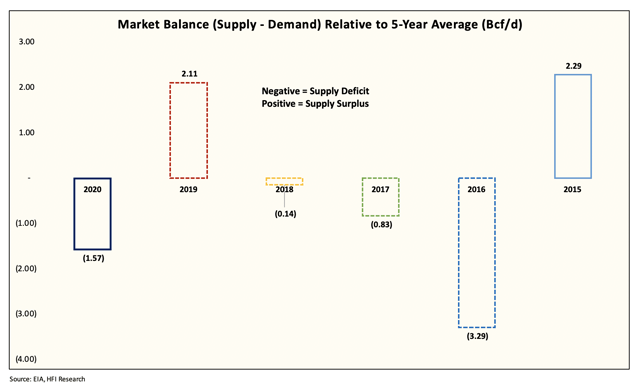 Despite the pricing difference however, natural gas fundamental balance remains the tightest since 2016, which signals to us a very tight winter balance ahead. A large part of what will drive winter balance will be the weather, but if fundamental balance is increasingly tight going into heating demand season, the market will recognize this fact and push natural gas prices higher to give them the benefit of the doubt.

So for those trying to time natural gas price rise, we think the October - December contracts are a better way of playing the price rally.

For us, we are sticking with EQT (EQT). Today's bullish price move comes despite a broader market sell-off, which is encouraging. We still see $17 in the near term. 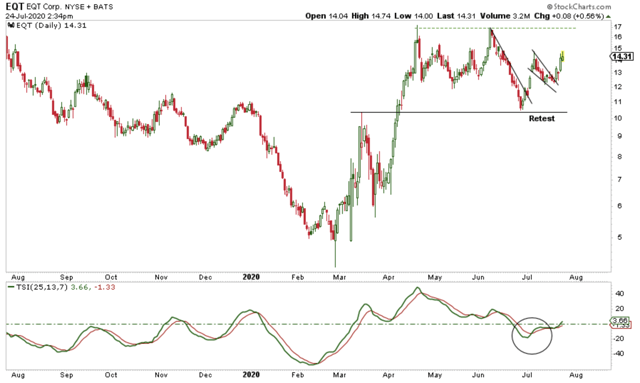 We are now offering a 2-week free trial!

Disclosure: I am/we are long EQT. I wrote this article myself, and it expresses my own opinions. I am not receiving compensation for it (other than from Seeking Alpha). I have no business relationship with any company whose stock is mentioned in this article.