When AT&T (NYSE:T) released their results for the second quarter of 2020, some investors were disappointed and following this there have been suggestions that some of their peers like Deutsche Telekom (OTCQX:DTEGY) could be a more desirable dividend investment. Being a shareholder of AT&T who is primarily interested in their dividends, it was quite interesting to explore whether my capital could be better allocated elsewhere. Whilst this particular peer may ultimately prove to be a suitable dividend investment, I still believe that AT&T is currently a superior choice for various reasons.

Reason One – Their Current Dividend Yields

One of the first bits of advice that many dividend investors often receive is to not blindly chase higher yields and whilst this has merit, yield still forms an important part of the decision-making process. If all other considerations such as risk and growth are held constant, a higher dividend yield is always more favorable since in the world of investing, it is only natural to want the highest returns possible.

Due to the significant difference between these two dividend yields, Deutsche Telekom will have to provide significantly higher dividend growth to even just catch up to the yield on cost that AT&T offers investors. If the latter were to only grow their dividend at a meager 1% per annum perpetually into the future whilst the former were to grow their dividend at three times this rate at 3% per annum, even after 20 years they still would not have reached a nexus, as the graph included below displays. Whilst their actual future dividend growth could easily vary from these rates, this provides an example of the difficult task ahead for Deutsche Telekom. 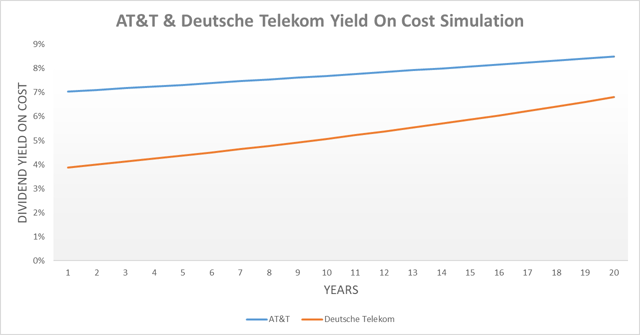 Even if the dividend yield on cost for Deutsche Telekom were to finally match that of AT&T one day far in the future, the shareholders of the latter would have still received more dividends in total. The graph included below uses the same assumptions as previously and clearly displays that shareholders of AT&T are relatively better-positioned to receive significantly more dividends in total for decades. Based upon my calculations, in order for Deutsche Telekom to return the same total dividends as AT&T in the next 20 years, they would have to provide growth of 6.75% per annum versus only 1% for their American peer, which considering their dividend history seems quite improbable. 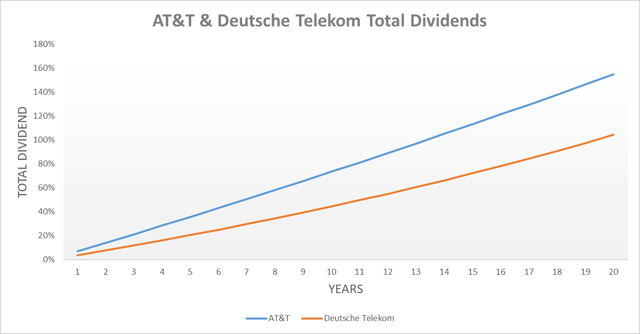 It has thus far been assumed that their dividends continue increasing every year; however, when looking at their dividend history this may only be realistic for AT&T. Another one of the first investing adages often taught is that history does not necessarily predict the future; however, it nonetheless is still worthwhile reviewing since many times history may not be copied but still rhymes. When it comes to dividends this is especially relevant, as mature companies with solid long-term dividend histories almost certainly also have solid underlying economics that allows them to consistently generate adequate earnings. This is a primary reason why many dividend investors favor the steady dividends of say Johnson & Johnson (JNJ) over a risky company like ConocoPhillips (COP).

When reviewing the dividend histories of AT&T and Deutsche Telekom, it can be seen that whilst the former has been steadily increasing during the last 20 years, the same certainly cannot be said for the latter, as the graph included below displays. Although the future could change, this does not set a favorable precedence to believe that their dividends are going to begin steadily increasing after two decades of very patchy results. 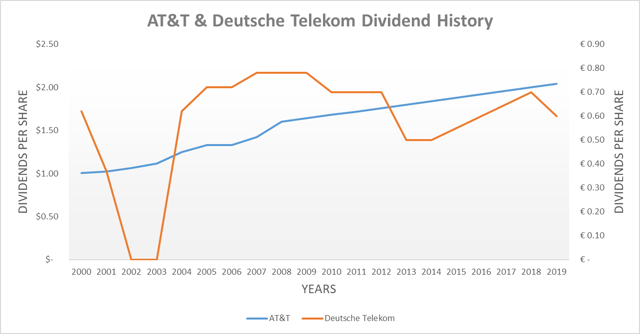 Regardless of the dividend income that they offer investors, the primary purpose of investing is always to acquire assets at less than their intrinsic values, thereby generating alpha. Since they are primarily desired by dividend investors, their intrinsic values were estimated by using a discounted cash flow valuation that simply replaces their free cash flow with their respective dividend payments.

The scenarios for both AT&T and Deutsche Telekom are exactly the same as previously outlined and thus foresees the former having dividend growth of 1% per annum perpetually into the future, with the latter being higher at 3% per annum. These scenarios were purposely selected to compare a middle of road scenario for AT&T to a bullish scenario for Deutsche Telekom, thereby further stress-testing my preference for the former over the latter.

A Monte Carlo Simulation has been provided with a wide range of 121 different cost of equity assumptions for both individual scenarios. It can be seen in the graph included below that AT&T has materially fewer intrinsic values that are less than their current share price when compared to Deutsche Telekom. Whilst the latter only having 28% of intrinsic values below their current share price is still a good set of results, it pales in comparison to the former considering it required a relatively more bullish scenario. At the end of the day, these are impressive results for AT&T and thus indicate that their shareholders appear to have more favorable return prospects than those holding Deutsche Telekom. 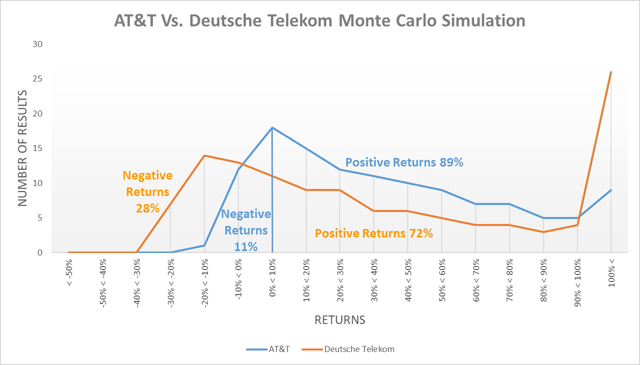 The Monte Carlo Simulation utilized a wide range of 121 different cost of equity assumptions, which include expected market returns from 5% to 10% and risk-free rates from 0% to 5%, both of which used 0.5% increments. The 60M Betas utilized were 0.78 (SA) for AT&T and 0.73 (SA) for Deutsche Telekom.

Since Deutsche Telekom is a German company they obviously report their results in euros and thus they also declare their dividends in euros. Whilst this article could theoretically be read right across the entire globe, the main target audience is those investors residing in the United States. This means that the constantly changing euro to USD foreign exchange conversion rate will be a headache for those dividend investors who are seeking a steady income, as the graph included below displays. It also further complicates any valuation strategy and thus creates more room for error due to factors completely outside of control for the company and its shareholders. 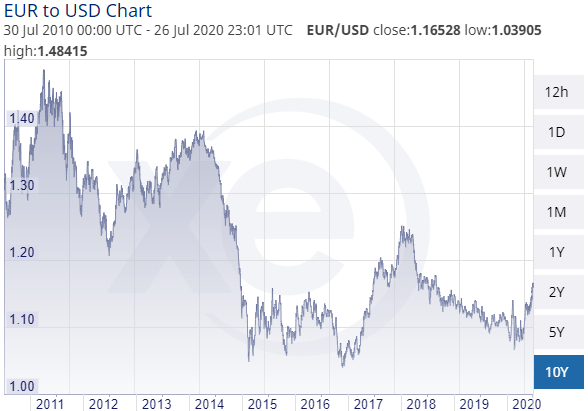 Since they are a foreign company it also gives rise to another consideration, being the potential tax implications of receiving dividends from a foreign company. Generally speaking, most foreign companies will withhold tax and or fees when processing their dividend payments. The potential impact that this has for each individual investor may vary and thus it would not be realistic to analyze these in detail, especially since I am not a registered tax advisor. If an investor is considering an investment in any foreign company and is also concerned regarding the potential tax implications, they should seek advice from a qualified and registered tax advisor.

Whilst different dividend investors are likely to have their own preferences when comparing different potential investments, it appears that the old favorite of AT&T still offers a superior choice over Deutsche Telekom. Following this analysis, I believe that maintaining my very bullish rating for the former is appropriate, whilst also assigning a neutral rating to the latter.

Daniel Thurecht
9.78K Followers
My analysis primarily focuses on income investments with a preference for those sporting high and very high yields.  This space often contains value traps, although it also contains very desirable opportunities that have the potential to generate significant alpha for investors.  I endeavor to help investors make their own investment selections by providing my insights into financial information released by companies in the context of the current economic outlook.  Whilst I offer ratings via this site, these should not be taken as financial advice nor to proceed with a particular investment.  Apart from my extensive personal investment experience that spans over a decade, I have also obtained a Bachelor degree with Honours majoring in Finance, minoring in Accounting.
Follow

Disclosure: I am/we are long T. I wrote this article myself, and it expresses my own opinions. I am not receiving compensation for it (other than from Seeking Alpha). I have no business relationship with any company whose stock is mentioned in this article.