Rare earths, mainly neodymium and praseodymium, are indispensable in high tech. Since the majority of supply comes from China, the USA has been stepping up efforts to create a domestic supply chain for them. The fear, just like a decade ago, is that China could restrict exports to benefit its local electronics industry.

At the moment, there is only one significant rare earth mine in the USA - Mountain Pass in California. The latter is owned by MP Materials, which recently agreed to merge with blank-check company Fortress Value Acquisition (FVAC) in a $1.47 billion deal.

An Overview of Mountain Pass

MP Materials is set to become the first listed US rare earths company since Molycorp a decade ago. Ironically, Mountain Pass was also the flagship project of the latter. Molycorp filed for bankruptcy in 2015 and MP Materials bought the mine in 2017.

Mountain Pass is located in the Mojave desert and was once the world’s foremost supplier of rare earth minerals. It has produced rare earth products continuously since 1951 and was the only major source of rare earths worldwide until the 1990s.

With an average grade of almost 8%, Mountain Pass is among the highest-quality rare earth deposits in the world. It has a mine life of around 20 years according to an October 2019 resources and reserves study. 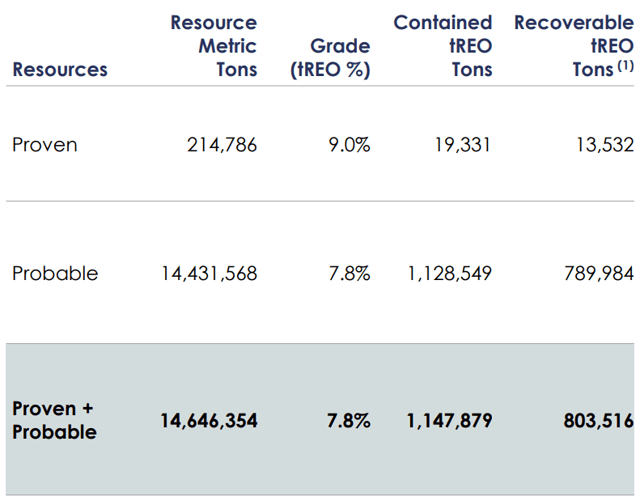 At the moment, Mountain Pass produces rare earth concentrates, which are sold to Chinese customers. The company has to ship over 50,000 tonnes of concentrated rare earths per year to China for final processing because its processing equipment is not operational.

Overall, Mountain Pass accounts for some 15% of global rare earth concentrate production. However, I think the key financial figures on an annualized basis don’t look too impressive with adjusted EBITDA at just over the $40 million mark.

MP has big plans for that future with a refurbishment of processing facilities forecast to drive annual adjusted EBITDA to over $250 million by 2023.

Following the merger, the resulting company will operate under the name of MP Materials and will remain listed on the NYSE under the ticker symbol MP.

Looking at the capital structure, the new MP will have close to $500 million in cash and FVAC shareholders will get a 23.4% of the shares. 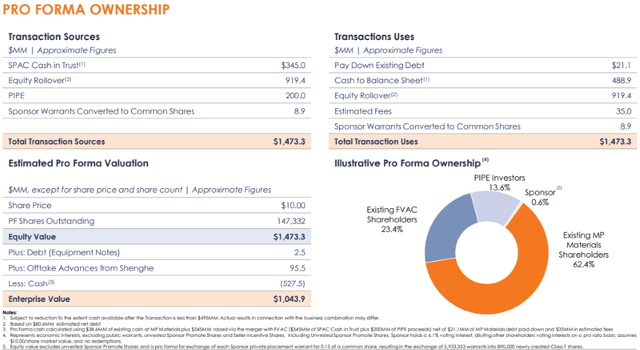 MP will invest some $170 million to upgrade outdated and mothballed processing equipment in order to fully recommission its refining facilities. The aim is to begin the production of high-purity neodymium and praseodymium oxide, lanthanum and cerium oxides and carbonates, as well as a heavy rare earth concentrate by 2022.

As I mentioned earlier, this expansion is expected to boost annual EBITDA to over $250 million. However, I have an issue with this figure as it’s based on expectations of high prices for neodymium and praseodymium, collectively known as NdPr.

MP also has a plan to expand downstream to NdPr magnets after 2025, which should provide it with profitability protection against NdPr pricing volatility.

Mountain Pass has seen several ownership changes and production suspensions since the 1950s. History never repeats itself, but it rhymes, and a decade ago Molycorp had this $1.25 billion audacious modernization project for Mountain Pass called Project Phoenix. Like MP, it too aimed to compete with China’s rare earths producers.

The result was that untested new technologies led to technical issues and couldn’t deliver significant revenue. When rare earth oxide prices sank in 2015, Mountain Pass was shut down.

My concerns are that MP could also run into technical issues with the planned refurbishment and that NdPr prices could stay low for several years. MP simply can’t compete on price with Chinese producers and every downturn in the rare earths market is devastating for the company.

MP bought Mountain Pass for just $20.5 million three years ago and at the mine is valued at over $2 billion ex-cash at the current share price of Fortress Value Acquisition.

This valuation doesn’t seem high under a scenario in which the refurbishment of Mountain Pass' processing facilities goes smoothly and NdPr prices soar. However, you have to keep in mind that Molycorp’s Project Phoenix failed and that it’s dangerous to rely on a perfect scenario in commodity markets.

I think that a lot can go wrong with this one, and I plan to avoid investing in this company until at least the moment the refurbishment of Mountain Pass' facilities starts delivering the forecast financial results.