"It's a recession when your neighbor loses his job; it's a depression when you lose yours" is a famous quote from President Harry S. Truman that well captures the trouble happening in our pandemic ravaged economy. President Truman's quote, in its own colloquial way, gets at the major concern that our economy faces, which is what percentage of job losses are cyclical or structural in nature? When the first significant rise in unemployment claims was recorded on the week ending March 21, the general thought was that the job losses were as expected and that when the pandemic was brought under control, people would return to work as normal. However, as the weeks and now months have passed by, we see that large scale "work from home" (WFH) policies have dramatically changed the corporate business model, and there will be far reaching effects on all businesses that coexisted with those corporations. Then, when we combine WFH driven job loss with the outright losses created by the shutdown, we find ourselves at the dreadful figure of 31,802,715 people claiming unemployment benefits as of July 4 (most recent date for aggregate data). That figure represents benefits for regular employees and additional ones provided for people like the self-employed and contractors who would typically not be eligible. So, if we calculate the unemployment rate using that actual figure, the rate jumps to 19.7% versus the 11.2% cited in the most recent payroll report. To put this in context, during the Great Depression, the unemployment rate got to about 25%. Now, whether or not the unemployment rate keeps climbing depends on how manageable the virus becomes and if the hysteria over the pandemic gives way to hysteresis in the economy.

Hysteresis, in economic terms, deals with effects that linger on an economy after the cause of those effects has been removed. An example of that today would be the reduced office-space needs due to WFH policies. Once we get to a post-pandemic world and corporations presumably continue with the lower cost WFH structure, the resulting glut of commercial real estate and the discarded service providers that leveraged themselves off those businesses will be economically impaired until a replacement comes. The reduced needs for office space has already been reflected in the inability of commercial REIT stocks like BXP, SLG and CLI to recover along with the rest of the market from the March lows. Unfortunately, this scenario supports some unemployment being more of a structural nature and also brings economic hysteresis with it.

The strength of the US economy comes from its services and consumption base. We've seen this strength build over time as the economy transitioned from an exports / manufacturing base to one of a consumption / services base thus allowing the average length of expansions to nearly double since 1948.

It's been the resiliency of services based employment that has also allowed for shallower downturns and quicker recoveries. However, it's also this services base that is now cause for a slower rebound from the pandemic. In previous recoveries, the economy returned to its prior form and usually in even better shape as some inefficiencies were removed. This time around, because we are looking at some structural changes, the post-pandemic economy could look significantly different from what existed before. The differences are primarily driven through changes in regional demographics as city living becomes less desirable and on-line / low-touch experiences become the standard across numerous industries. For example, new telemedicine appointments will result in reduced staffing needs for hospitals while the increase in online education will have the same effect on college campuses and college towns across the country. With "Education and health services" currently being the second largest employment supersector in BLS data, any headwind there will create a significant drag on the economy. In addition, corporations had already adopted a "hot-desking" policy of rotating groups of employees between home and office before the pandemic hit and whose use will only accelerate now and put even more pressure on commercial real estate. Given that we are still at the beginning of most of these changes, the recent high profile departures of Joe Rogan from California for Texas along with Elon Musk choosing Texas over California for his next Tesla factory demonstrate that people are taking the shutdowns seriously and are opting for less congested and less restrictive localities. On the positive side, the pandemic has also created an urgent need to re-shore the manufacturing of critical goods which is already helping to create more jobs now and certainly more in the future. So, what investors have to do at this point is to keep a sharp eye on total claims data and real estate trends to see just how much hysteresis is setting in and where.

As we head into a major week of earnings with the likes of FB, AAPL, AMZN and GOOG reporting, the market finds itself still near the all-time highs but after a bit of volatility last week. With technology shares still pulling most of the weight, we're starting to see some rumblings under the surface. Intraday volatility in QQQ has started to outpace the broader market and could be signaling increased volatility ahead. 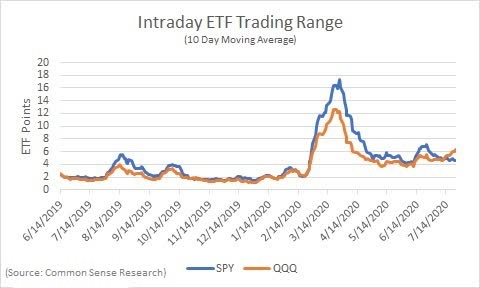 One thing is for sure and that is there is plenty of wall of worry out there for the market to climb. The good news is that with all the drug companies working on a possible COVID vaccine and therapeutics, we could be just around the corner from turning all this hysteria into euphoria!

Marco Mazzocco, CFA
127 Followers
Using my 20+ years of experience of working on Wall Street and a love for analysis and writing to deliver enjoyable articles to the investing community.
Follow