Twenty years on since the turn of the millennium and the U.S stock market is riding high. Despite the tremendous growth of economies like China, U.S equities today account for the same share of global stock market value as they did back in 2000.

Does this mean the U.S stock market is in another bubble? Or was there never a bubble in 2000?

The best measure of whether stocks are overvalued is the value of the firm relative to its assets, which is called its Q Ratio. On that score stocks were very highly valued in 2000 and are almost as overpriced today. The big difference between now and then is that in 2000 stocks were highly valued but bonds were cheap. The yield on ten year U.S treasury bonds was 6%, or 4% after inflation. This meant that equity investors could expect a return on investment that was little more than the return from holding bonds - a sign of excessive enthusiasm for equities.

This is what one would expect if there is an asset bubble. Money moves into stocks pushing up prices to bubble valuations, but that must mean money is also leaving bonds, which depresses valuations. The same thing happened within equities: by 2000, tech stocks were extremely overvalued, but old economy companies were incredibly cheap. For every bubble there must be an anti-bubble.

Fast forward to today, what assets are undervalued? None, it appears. Instead we have the Everything Bubble. Bonds, real estate, gold are all richly priced. How is that possible? Doesn't that contradict what we said about the need for an anti-bubble?

One way all assets could become overvalued is if the amount of money in the economy grows larger. And as it happens central banks, including the Fed, have boosted the money supply an awful lot since 2000. Case closed? The problem is that if the Fed is spraying money about willy-nilly, wouldn't some of it end up being spent on goods and services, which should be inflationary? But inflation has been low, if anything.

Is there any other way in which asset prices can get out of whack? If people try and save more money than firms choose to invest, that will push up equity valuations and depress interest rates. But why wouldn't firms invest more if they can do so profitably? If you have a situation where firms have a target for how much profit is generated from the capital they invest, then they will turn down investment projects that don't meet that criteria.

Business investment is lower as a share of GDP than in 2000.

That still leaves the question of, why aren't there enough suitable investment projects? Because of the growth slowdown after 2000. Both productivity growth and the growth of the labor force are lower.

Here is the connection between economic growth, interest rates, and returns on capital:

Suppose that productivity growth is high and is expected to be high for a long time. Then one's future self will have a higher income than you do in the present. It is then very tempting for you to borrow money to boost your spending today and saddle your future self with the debt - you reckon he won't miss the money. Why doesn't everybody decide to do that? It's impossible for everybody to be a borrower and no one a lender. Likewise, economy wide spending on consumption cannot exceed the economy's production. Something must intervene to stop that happening. That something is higher interest rates: the more people want to borrow rather than lend, the higher interest rates go, until there is a balance between savers and borrowers. These high interest rates then force firms to only invest in projects that can justify high interest rates, which are investment projects that deliver high returns. And finally, an economy that is growing fast has plenty of high return investment opportunities.

If the growth rate slows rather than speeds up, then the logic of the above still holds true, but in reverse. When growth slows interest rates should fall and equity valuations should rise, but not as fast as has actually happened. In addition to that the Q ratio should not keep rising.

How plausible is it that firms can simply choose not to invest if they don't want to? Won't they face competition from firms that do decide to take advantage of low interest rates and invest in labor saving machinery or expand into new markets?

There are millions of businesses in the U.S, most of which are small. Many of these business would if given the opportunity, borrow funds at low interest rates and use them to invest. The problem is that banks are unwilling to do so. If they were to lend out money at low interest rates then the profitability of those loans will be smaller than normal and this will diminish the bank's overall rates of return.

What of larger firms, those who are publicly listed or owned by private equity? These are firms that can obtain funds to invest, either from their own cash flow or from the capital markets. But the managers of these firms are under more pressure to achieve a good return on capital, where a good return simply means the return that companies were forced to hit historically before the slowdown in economic growth.

That's the explanation for why asset valuations are high. Now we turn to profit margins and labor's share of income. Why have corporate profit levels been so elevated?

One possible explanation for the fall in labor's share of income (and the increase in profits) is that it is all down to technology. Robots and software have become much more advanced, and can now do before what could only be done by humans. The basic problem with this thesis is, where are all these robots? Moreover, if firms are making a big shift toward utilising capital instead of labor, then shouldn't this lead to more investment and thus higher interest rates?

As it turns out, it can be quite helpful to think that U.S firms have automated their workforce; American workers now have a steely countenance.

What we know about firms in the U.S is that they want to generate the same kind of financial returns they achieved prior to the growth slowdown. But when it comes to equity returns that is impossible. Long term returns on equity come from the dividend yield plus the growth of those dividends. Since equity valuations are higher, the dividend yield is lower, while the dividend growth rate should only grow as fast as the economy.

The only way out for U.S corporations is if they can somehow boost their revenue growth higher or grow their profits faster than the growth rate of the economy. The former would mean that the economy's growth would not actually slow down. The latter would imply that the share of national income going to profits increases and the labor share of income must fall.

Since the economy has slowed down, we know that U.S corporations cannot have been fully successful in preventing growth from slowing, but what if they were partially successful? By pushing employees to work harder and produce more output, firms can lessen the impact of the underlying growth slowdown.

So employers are (unwittingly) demanding their employees to work harder, or else lose their job. Greater effort on the part of employees means they are supplying more labor, so it shouldn't come as a surprise that wages - the price of labor - has come under pressure.

Since 2000 the prime age labor force participation rate (the percentage of the population between 25 and 54 that is working or seeking a job) has continued to rise in practically every country; the United States, though, has experienced a decline.

This second chart compares the U.S to other Anglophone countries, which are culturally and economically close to each other. One would expect similar labor force trends. 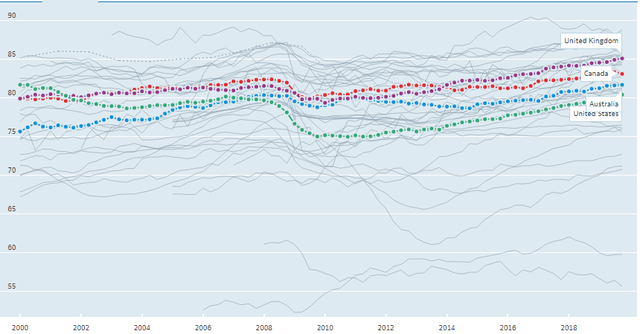 The U.S is in green and has gone from first to last.

It shouldn't come as a surprise that this has something to do with the increased effort levels being imposed by firms on workers. Having to work harder than one really wants to makes any job less appealing. And since not everybody needs to work - those who can rely on their spouse to provide income for example, then staying at home becomes more attractive.

How much has effort increased? There aren't any effortometers, nor any time machines either for that matter, so it's not possible to directly measure how much effort has changed since 2000. However, by comparing the growth in productivity of workers in the U.S vs other advanced economies since 2000, we can estimate that effort has been boosted by a few percent. This is an aggregate measure; not every occupation, firm, or location within the U.S will have seen the same increase.

I will admit that the claim American workers have become Stakhanovites is a bold one. It's the sort of claim that immediately raises all sorts of objections and questions, like: how is that even possible in a capitalist economy, and why hasn't it also happened outside of the U.S?

For those curious to learn more there is some additional material, which can be found here, where I expand upon some issues and clarify others.