Intel (NASDAQ:INTC) fell by 16% after honestly admitting that it needs to change its strategy. The management finally decided to copy the fabless strategy of its worthy competitors. It was received like recognition of defeat, but in a fierce competition, the adaptability is more like an advantage.

TSMC (TSM), an operator of independent semiconductor factories, has got a scale. It successfully uses it to innovate, keep old and attract new clients. The most advanced semiconductors are produced on their plants. So for Intel, it is like to compete with all the other rivals, not just with AMD (AMD). So it had been obvious even before this earnings report that Intel would be losing its market share in the foreseeable future. The thing is, its market share for server and consumer segments could shrink from the current level of 60-80% to 15-30%, and it would still be enough for Intel to justify significantly higher valuation for its shares than the market suggests now. 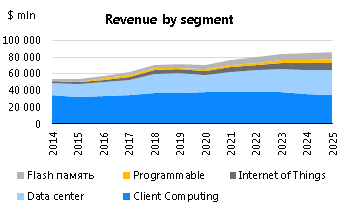 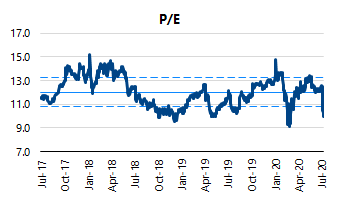 The multiples, like EV/EBITDA and P/E, are at so low level that it can be interpreted as if financial results are expected to decline in the years ahead. Is it really the case? Intel's target price has been downgraded a lot after the earnings report. To be precise, according to Bloomberg, consensus target price decreased from about $65 per share to roughly $58 (-11%). The current price is about $48. The consensus estimates for EBITDA in 2021, 2022 and 2023 were lowered by 15%, 7% and 4% respectively.

According to estimates gathered by Bloomberg, the revenue will stumble next year by 1.5%, but in 2022 the growth of about 5% will return.

In the current valuation, the worst-case scenario is priced in. From this level, there are more upside risks than downside.

TSMC is willing to build a factory in the USA. The capacity of the factory is planned to be about 20,000 silicon wafers per month, using the company's 5-nanometer process.

"Subsidies will be a key factor in TSMC's decision to set up a fab in the U.S.," TSMC Chairman Mark Liu told Bloomberg. "We are still talking to the U.S. government. Our request is that the state and federal governments together make up for the cost gap between the U.S. and Taiwan."

It looks like a win-win situation, in which Intel will get TSMC's deal and spare capacities close to its own plants in Arizona, and TSMC will secure the U.S. subsidies.

Intel has said it is working with the U.S. government to explore ways to strengthen domestic manufacturing.

It looks like the main point of selling Intel's shares now is that TSMC does not have spare capacities for Intel, and if it does, it would not deal with the U.S. -based company, because Intel could return to its own plants sometime in the future and break the deal.

It is a good point, but it seems more than priced in the shares. Any news about progress in building a more strategic relationship between TSMC might take the shares higher. These kinds of news have been arriving for months actually. The recent one consists of rumors regarding an agreement between companies:

Insiders talking to the Taiwanese newspaper have indicated the following:

Intel can be thankful for the TSMC capacity made available by the Huawei / HiSilicon orders being cancelled or it would be in an even worse position.

Source: AMD and Intel do battle over TSMC capacities

Intel has found some indirect assistance from the U.S. government because of these Huawei new sanctions. TSMC can find spare capacities for Intel next year, and in 2024 there is also likely to be a new factory built in Arizona.

Intel is an attractive big player in the most perspective semiconductors markets. The company adapts and it is able to make a strategic partnership with TSMC after leaving its old ways. This game with AMD and NVIDIA (NVDA) is not played yet. In the current valuation, the worst-case scenario is priced in. From this level, there are more upside risks than downside.

Additional disclosure: This article is for informational purposes only. Please do your own due diligence before making any investment decisions.