Tech has without a doubt carried the torch for the markets in this recent rally. Many stocks are still struggling to get back to where they were pre-COVID, but tech stocks are flying high. This includes Shopify (NYSE:SHOP). The company is up over 245% off the March lows and has cleared to new all-time highs on the earnings news. Shopify continues to set itself apart from the field in what it does, and it is translating to the stock price even with the crazy high valuation.

How Were The Earnings?

Shopify crushed Q2 earnings. Some of the highlights include (All numbers from earnings call):

All in all fairly good, which is why the stock popped almost 12% on the news. Of note was that the GMV was accelerating in April and May, but has slowed for June and July. But Q2 GMV growth accelerated to its highest level since before the 2015 IPO. The conversion rate of the 90-day free trial was lower than the rate pre-COVID. This could be due to several factors including the inability for some of the merchants to continue to operate at all.

...the company expects stronger retention rates for these early 90-day trial cohorts as they tend to be longer-tenured at the time of conversion and bring higher GMV. 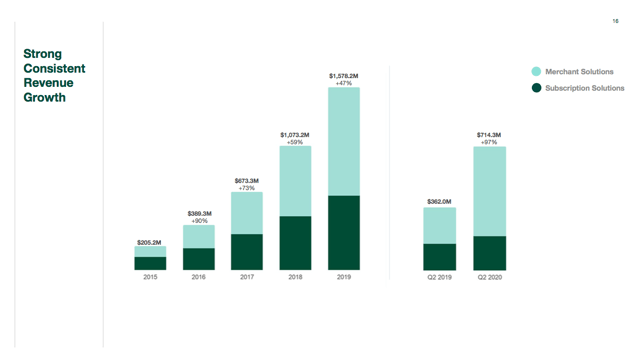 Revenue continues to climb at a very quick rate, which is part of the reason the stock is exploding the way it has. As long as Shopify can maintain these kinds of growth rates, there's no reason for the stock to slow down. Merchants are seeing more local shoppers. This is great news for both small businesses and Shopify. A theme for COVID across social media has been to shop local, and Shopify's numbers are confirming this is happening. Curbside pickup is also a hit right now due to COVID. 39% of the brick-and-mortar merchants have set up some sort of local in-store curbside pickup delivery sources. Shopify Plus has been a success thus far with many large companies signing up like Hurley, Schwinn, Snickers, Molson Coors (TAP) to name a few. Multiple companies across multiple industries showing how versatile Shopify is.

How Is It Setting Itself Apart?

There is no question that Amazon (AMZN) continues to rule the space. But the competition is getting more fierce. Especially with the developments, Walmart (WMT) is trying to reach its customers more efficiently and faster. I fully expect it to climb the rankings as shown below. As for Shopify, it needs to try and steal more market share to justify the current valuation. 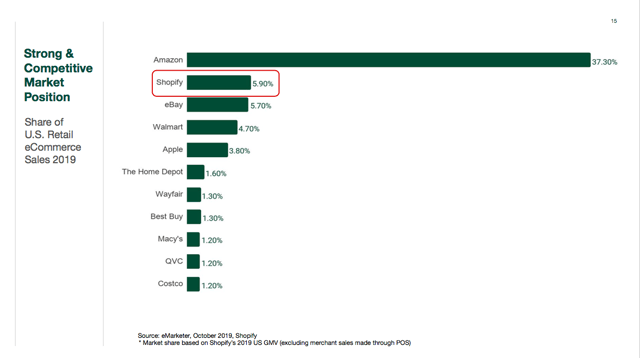 Sitting pretty in 2nd place is great, but as I mentioned with Walmart, the chase is on. Amazon has officially recognized Shopify as a competitor, but they aren't really competitors as the core of what Shopify does Amazon does not, but at the end of the day, they are e-commerce. CFO Amy Shapero had the following to say with regards to how the company is setting itself apart:

....We're also seeing digital transformation generally is pushing larger retailers to look at partners who are nimble, who are flexible, who are certainly cost-effective and that's at Shopify Plus for the larger brands.

With the move that Walmart is making to go more direct to consumer, it joins the list of many consumer packaged goods suppliers that are trying to make the move. A lot of companies are choosing Shopify to make this move simply due to the simplicity of it. They can launch quickly and experiment with their business in order to fine-tune it. Shopify is seeing brands across multiple sectors use them to become more direct to consumer and it's only going to continue to grow.

What Challenges Does It Face?

One of the challenges besides competition which was addressed above is the limitation of a unique storefront. This is where Amazon and eBay (EBAY) set themselves apart. These sites utilize a central website where users can just search for what they need. Shopify's customers all use their own websites to generate traffic. Shopify helps drive the traffic, but its traffic is spread out amongst 1.5 million different stores. Shopify leans heavily on users searching for its merchants' products, or seeing them on social media and other advertisements. If its merchants' websites do not show up on product searches, the merchant and Shopify would suffer drastically. 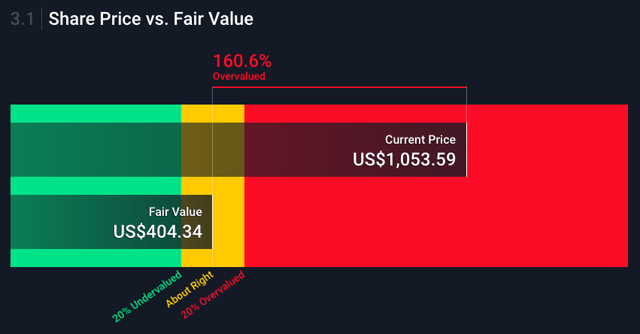 Living up to the current valuation might be its largest hurdle to overcome. All you have to do is take a look at the recent articles all published on Seeking Alpha to see what contributors think of the stock. While I remain neutral (I know fence-sitting), 6 of the last 10 articles are bearish or very bearish. One neutral, and one bullish that suggests taking profits. So call it 7/10 are suggesting you sell the stock. Looking above, we can probably see why. There is no doubt the stock is overvalued on a free cash flow basis, but that's not how this stock has ever traded. Is 160% a little much? Yes. There needs to be some catch up at some point. But there's no need to hate on the valuation while the stock is trending higher in beast mode. Much like Tesla (TSLA). Shorts continue to get crushed. I don't doubt they will have their day in both names, but right now the market is still pushing these names higher. There is no question that their fundamentals need to catch up or the stock price needs to consolidate at some point. For now, ride the trend for it is your friend.

What Does The Price Say?

Shopify has been a stock I have asked to see pullbacks from multiple times. Most recently on May 10th, I wrote how it needed to consolidate. Which it did for about a month before ramping up again on its quest for the $1,000 mark. I also said a correction back to the February highs of about $530 would be ideal, and we are nowhere near that now. So call it 50% right?

Since bottoming in March, the stock is now up over 245%. The stock ran into some headwinds around the $1,000 mark (naturally) and corrected back about 15% throughout most of July bottoming out on July 24th at $883. Since then, the stock has blasted back to all-time highs on the positive earnings news discussed above.

There is no better buy signal than a break out to new highs. The fact that we broke out Wednesday morning up almost 12% and closed the day only up 7% is a slight red flag. Continuation/confirmation tomorrow is crucial.

If you are looking for longer-term support at these levels, it is often hard to use horizontal support because there isn't much history. Looking below we can see the 50-day moving average and how well the stock has reacted off of it, or at least near it. Looking back all through 2019 we can see that it served as great support. This holds true through 2020 where we can see the two most recent dips have taken us pretty well back to the moving average before rocketing off from there. Buying the dips on Shopify has worked well as long as you use the 50-day moving average as one of your must-watch levels.

Zooming into an hourly chart below, we can see that there is some decent support around the $1,050 mark. This is essentially where the stock topped out in early July and where the stock came to rest on Wednesday. A bounce off this mark tomorrow is very important to the long thesis on Shopify. If you are long and believe in stops, you essentially have to have a stop down around $908. This is the red line on the chart below which serves as the support during the correction we saw in July. The stock has moved too quickly the last week to place one any higher without being shaken out on a quick move down. This only holds true if you are a long-term believer in the name.

As you can see, there is a lot to like about Shopify after its very positive Q2. If the company can continue to grow revenue at these incredible levels, then the stock is going to do just fine. As soon as that train stops, the stock will likely slow as well. But I do not see that coming anytime soon. The valuation is very high, but the market does not appear to care as the stock continues to get bought up. At the end of the day, the trend is your friend, especially when there is solid support in place. The party goes on for now! Stay safe out there!

Graham Grieder
5.52K Followers
A finance graduate from the University of Alberta. I have developed a trend-following strategy backed by solid fundamentals. Removing emotion from the situation is the hardest, yet most important lesson to learn.-"I will tell you how to become rich. Close the doors. Be fearful when others are greedy. Be greedy when others are fearful." - Warren Buffett
Follow

233 Comments
To ensure this doesn’t happen in the future, please enable Javascript and cookies in your browser.
Is this happening to you frequently? Please report it on our feedback forum.
If you have an ad-blocker enabled you may be blocked from proceeding. Please disable your ad-blocker and refresh.