A total of one company paid an increased dividend or issued a special dividend during the month of June.

A total of two companies suspended or decreased their dividend that was payable during the month of June.

In June we sold out Kimco Preferred Series L (KIM.PL), and we took advantage of the rise in prices to sell out of Southern California Edison Preferred Series D (SCE.PD). SCE.PD has been in the portfolio since the end of 2017 and has produced roughly 2.5 years of dividends for the portfolio. Although SCE.PD has never failed to miss a dividend payment, the yield has always been subpar when compared to other high-quality preferred stocks. 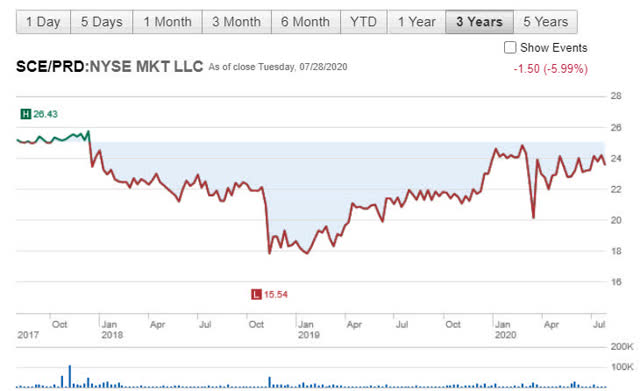 Based on the chart above, it is easy to see that we entered into the position at about the worst time possible and that shares only really became attractive in the latter part of 2018 when shares reached a low of $15.54/share and generated a current yield of 6.95% in the process. We decided to hold onto SCE.PD due to the fact that it was held in John's Traditional IRA instead of him and his wife's Taxable Account (where we would've been able to recognize realized losses). Shares reached their first plateau at around $22/share and have since reached a ceiling at around $24/share.

The wait was truly worth it as we were able to sell all 200 shares from John's portfolio. We only needed to recognize a total realized loss of -$122.16 which compares with what would've been thousands of dollars of realized losses approximately a year and a half beforehand.

Given that this was a utility, we are looking to replace the income with preferred shares that have a higher yield and a largely similar asset class. We have decided that the newest ETF that we will add to John's portfolio is the VanEck Vectors Preferred Securities Ex Financials (PFXF). This ETF was mentioned in the comments section of my recent article iShares Preferred And Income Securities ETF: Worth Considering At These Levels. I find this holding interesting for several reasons:

We have had exposure through several financial preferreds, but they didn't play out as well because they were fixed rate until the redemption date when they convert to a dividend that is tied to a short-term variable-rate index. These funds were performing well as the Fed continued to raise interest rates for the better part of 2018 and early 2019, but lost their value proposition when the Fed put the brakes on rates going into 2020 (and were especially impacted when rates were dropped back to zero again).

PFXF has a relatively low expense ratio and allows John to achieve a higher level of diversification within preferred stock among the non-financial and non-REIT industries. All of this combines to produce a Trailing Twelve Month (TTM) yield of approximately 5.93%.

I decided that I would condense this section in order to reduce the amount of clutter in these articles. For those who are new to the series and are interested in a more in-depth background, you can find that information by clicking here.

Here are some important characteristics regarding John's portfolio:

The following stocks cut or suspended their dividend payment that was due in the month of June.

Las Vegas Sands - Prior to the COVID-19 situation reaching maximum severity, we sold most of the position in LVS since it was a more speculative purchase in John's portfolio. The shares we retained as a small speculative play have seen some modest price recovery, but don't expect it to reach the upper-end of its 52-week highs anytime soon. Additionally, I wouldn't bet on the dividend resuming until travel reaches levels typically seen during summer months. Given the current challenges that we face readers should expect that we are likely to offload remaining shares of LVS in the mid-$50 range (at approximately the breakeven point).

EPR Properties - EPR came into COVID with a rather strong outlook on the recovery of the economy when it received authorization to repurchase up to $150 million of its common shares. As the crisis deepened, EPR rescinded its buyback and then subsequently suspended its dividend on the common stock altogether. Where the strength in EPR lies is in its limited debt maturities and maintaining enough cash on hand to cover expenses for at least 3.5 years and that is with assuming it collects 0% of monthly cash revenue. EPR is speculative and not quite as attractive at current levels given that it looks like COVID will remain an issue for longer than we all hoped for. 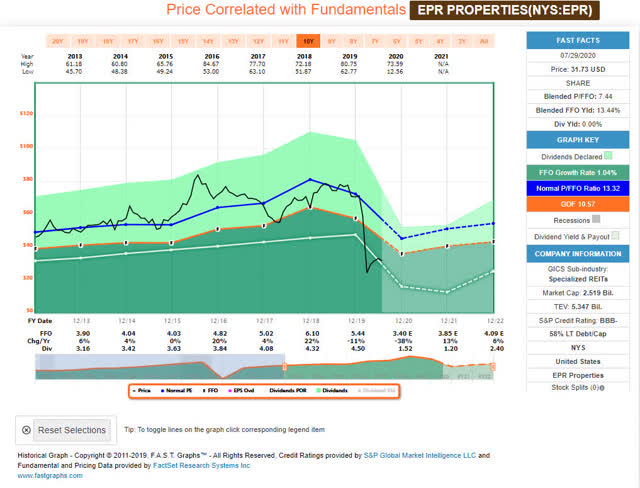 EPR has temporarily suspended its dividend of $.385/month.

The following stocks paid increased dividends/distributions or a special dividend during the month of June in John's Retirement Accounts.

Pepsi - The recent increase by Pepsi was solid given the uncertainty of the current environment that we live in. An increase of 7.1% is in line with its 10-year average growth rate of 7.89%. Pepsi appears to be firing on all cylinders with a solid earnings beat in Q2-2020. Look for strong results to come from Pepsi's purchase of Rockstar (Pepsi has been distributing the product since 2009 so expect this purchase to be almost instantly integrated). We are looking to add shares of Pepsi whenever possible but the share price remains at the high end of fair value (10 and 20 year P/E ratios average around 21x). We prefer to only add Pepsi when the dividend yield is above 3.2%. 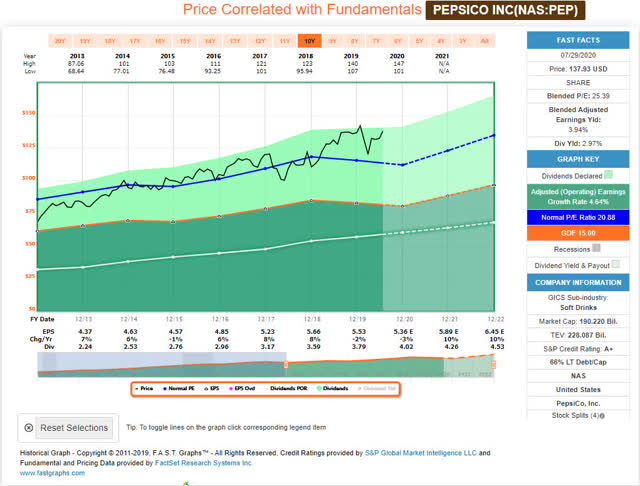 There was one position eliminated from the Traditional IRA during the month of June.

Roth IRA - The following stocks were added to the Roth IRA during the month of June.

There were no shares eliminated from the Roth IRA during the month of June.

We are cautiously optimistic on PACW although we won't be adding shares anytime soon now that COVID is having a particularly nasty impact in California. DUK has traditionally been a great buy in the low $80/share price range. We saw some decent realized gains from the sale of KIM.PL and began reinvesting some of those proceeds into the iShares Preferred and Income Securities ETF (PFF). More information about PFF can be found in my recent article iShares Preferred And Income Securities ETF: Worth Considering At These Levels.

I'll admit the recent purchases of APLE and PK were a little too early and overly optimistic given the recent drop in price with the resurgence of COVID across the United States. While I am still optimistic about the recovery of these stocks (APLE in particular), investing in these companies at this point in time is both speculative and should be a limited part of your portfolio. Both companies have suspended their dividends and are selling at a major discount to 52-week highs.

Income for the month of June was up significantly for John's Traditional IRA and down slightly in John's Roth IRA year over year. There was a significant amount of trading activity in John's traditional IRA during the months of June and July as we sold a couple of positions and entered into a new one with PFF. The goal of this was to diversify John's preferred holdings away from REITs like KIM.PL and to acquire higher-yield assets than what was provided by holdings like Southern California Edison Preferred Series D and Bank of America Preferred Series L (BML.PL). Both of these holdings were providing dividend yields in the low 4.5% range on a quarterly basis whereas PFF is generating a yield around 5.7% on a monthly basis. 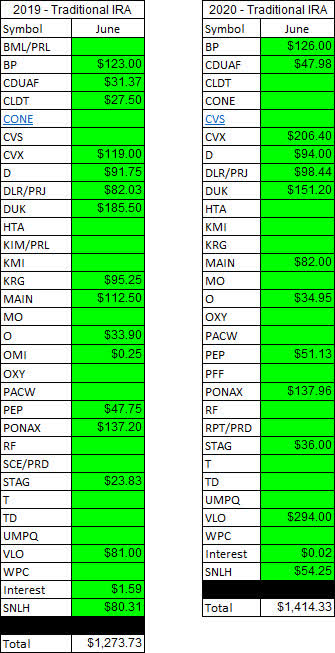 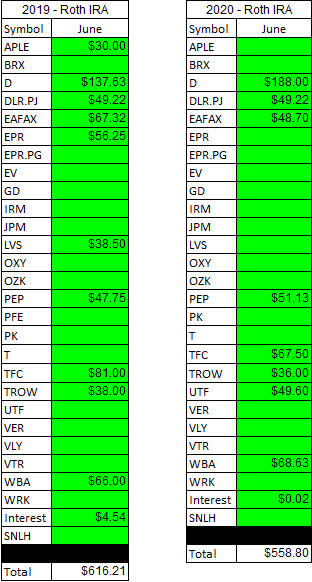 Here is a graphical illustration of the dividends received on a monthly basis for the Traditional and Roth IRAs. 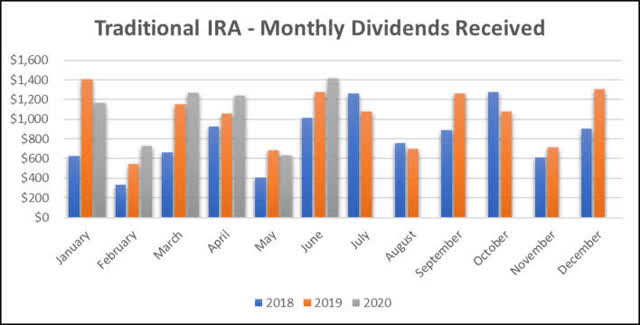 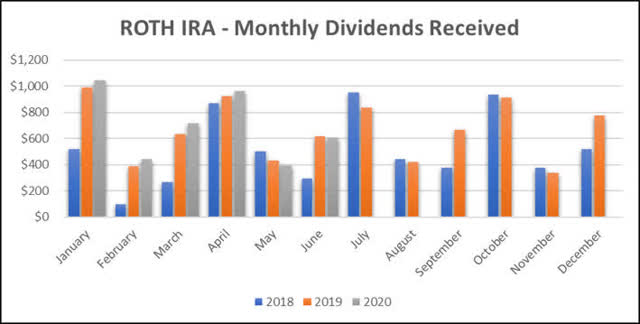 Based on the current knowledge I have regarding dividend payments and share count, the following tables are a basic prediction of the income we expect the Traditional IRA and Roth IRA to generate in FY-2020 compared with the actual results from 2019. 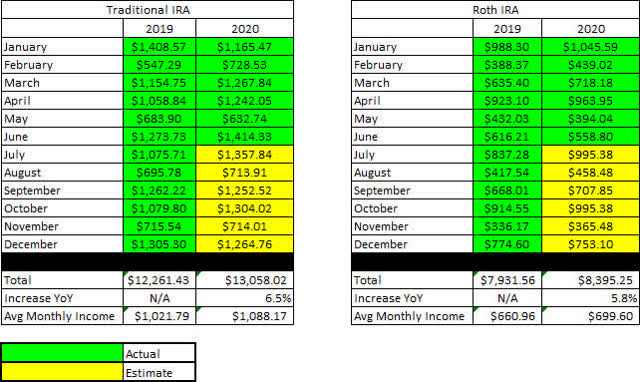 Below is an expanded table that shows the full dividend history since inception for both the Traditional IRA and Roth IRA.

I have included line graphs that better represent the trends associated with Jane's monthly dividend income generated by her retirement accounts. As year three begins, we should continue to see a more stable pattern that comes from the deposit of regular dividend income. The images below represent the Traditional IRA and Roth IRA, respectively. There may be additional volatility in monthly dividends received due to dividend suspensions/cuts as a result of COVID-19. 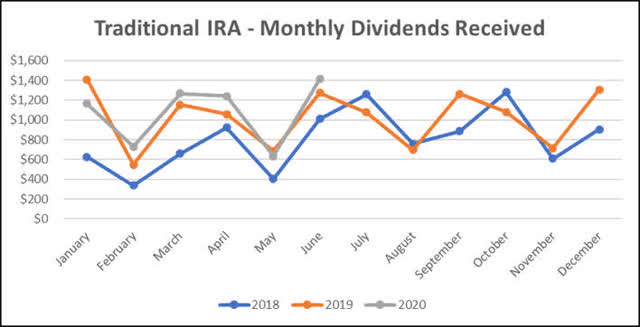 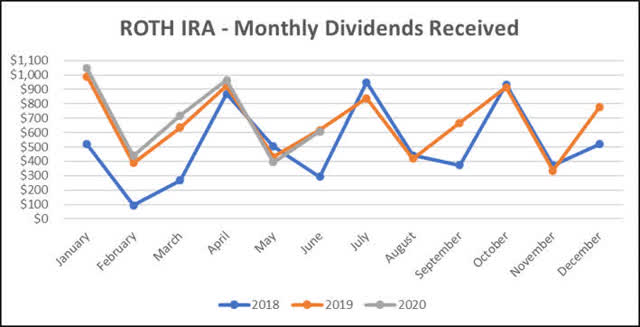 Here is a table to show how the account balances stack up year over year (I previously used a graph but believe the table is more informative).

Lastly, on the topic of transparency, I like to show readers the actual unrealized gain/loss associated with each position in the portfolio because it is important to consider that in order to become a proper dividend investor, it is necessary to learn how to live with volatility. The market value and cost basis below is accurate as of the market close on July 28th.

Here is the Unrealized Gain/Loss associated with John's Traditional and Roth IRAs. 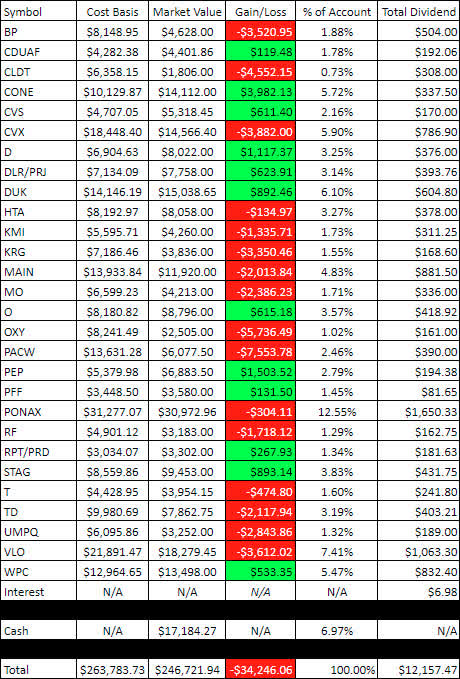 As mentioned in the Taxable Account article for April, I have decided to continue including the following graph that was suggested by one of my readers who thought that this particular graph would demonstrate some of the interesting trends that we see each month while comparing them on a year-over-year basis. The main issue with the graph as it currently stands is that this is only the third year of collecting this data which makes the graph more choppy than it should be. I believe that the graph will continue to become more valuable as we enter into years four and five. 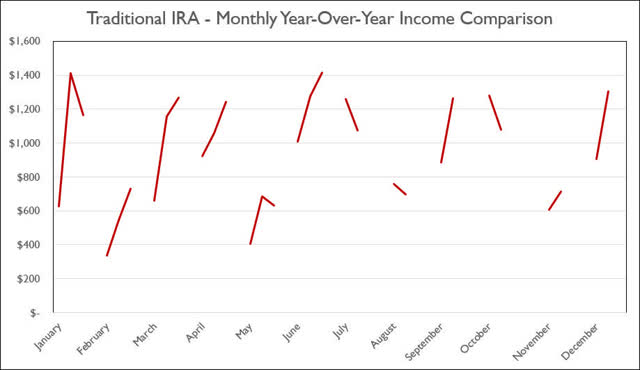 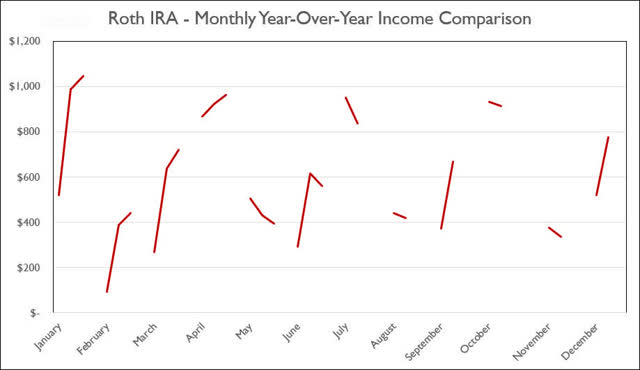 John's activity will continue to see some switching of preferreds as we trade out of some lower-yield holdings (most of which are fixed-to-floating) now that we will be in a lower-for-longer environment. These preferred shares were originally bought as a hedge for a higher interest rate environment since they were purchased at a pretty sizable discount to the coupon redemption value. Unless events happen that create significant discounts in preferreds it is like that we will stick with ETFs and CEFs for preferred stocks going forward.

John's July article will be interesting as a number of REITs which would have normally paid dividends have either cut the dividend or temporarily suspended it all together. Readers can expect to see a slight loss of income in the Traditional IRA and a much larger reduction of income in the Roth IRA.

New Article Format: Let me know what you think about the new format (what you like or dislike) by commenting, liking, following, etc. I appreciate all forms of criticism and would love to hear what I can do to make the articles more useful for you!

Disclosure: I am/we are long APLE, CONE, EPR, GD, KMI, MAIN, OZK, T, UMPQ, VLO, WRK. I wrote this article myself, and it expresses my own opinions. I am not receiving compensation for it (other than from Seeking Alpha). I have no business relationship with any company whose stock is mentioned in this article.

Additional disclosure: This article reflects my own personal views and I am not giving any specific or general advice. All advice that is given is done so without prejudice and it is highly recommended that you do your own research. This article was written on my own and does not reflect the views or opinions of my employer. It should also be noted that Umpqua is now my previous employer as I recently took a job with a local credit union. I am still personally long UMPQ stock and will not take questions about Umpqua for the next several months.

Follow Matthew Utesch and get email alerts
+
Add a comment
Disagree with this article? Submit your own.
To report a factual error in this article, click here.
Your feedback matters to us!