Whether the U.S. manufacturing sector is just growing or growing strongly is really a matter of your choice.

We've two different versions of the PMI - our indicator of the near future - to choose from and they're giving different readings.

The PMI does normally match well over GP growth but which PMI do we want to believe at present?

As I've been pointing out for a few months now that we've just had a shocking recession is obvious enough. Given the slump in production we might well call it a depression in fact. What we want to know though is how fast are we going to recover?

Some commentators have been insisting that a modern production system is just so complex that it'll be near mipossible to put back together again. People like me, who have rather more faith in markets, tend to think that it'll be easy enough assuming that the demand for the production is still there.

That is, we might have a macroeconomic problem with demand, but we'll not have a technical problem with restarting industry. After all, all the people with the technical knowledge about how industry works are actually already working in industry. This is what they do for the daily bread anyway.

Whether the macroeconomic demand is going to be maintained is one thing, whether industry is capable of waking up again the answer seems to be yes.

One version of the purchasing managers index for the US is from IHS Markit. This says that US industry is around and about expanding again:

The seasonally adjusted IHS Markit final U.S. Manufacturing Purchasing Managers’ Index™ (PMI™) posted 50.9 at the start of the third quarter, up from 49.8 in June but slightly lower than the previously released 'flash' estimate of 51.3. The latest figure signalled a marginal improvement in the performance of the U.S. manufacturing sector, the first since February. 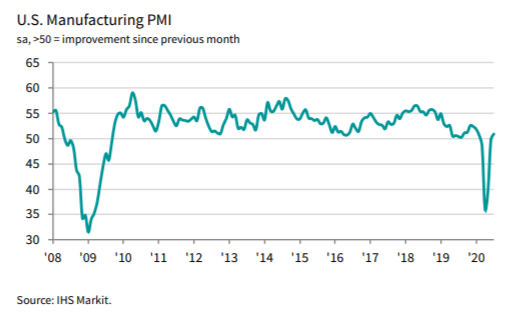 (US manufacturing PMI from IHS Markit)

That's not exactly what we British would call stonking growth.

The Institute for Supply Management has their own panel producing a manufacturing PMI:

“The July PMI® registered 54.2 percent, up 1.6 percentage points from the June reading of 52.6 percent. This figure indicates expansion in the overall economy for the third month in a row after a contraction in April, which ended a period of 131 consecutive months of growth. 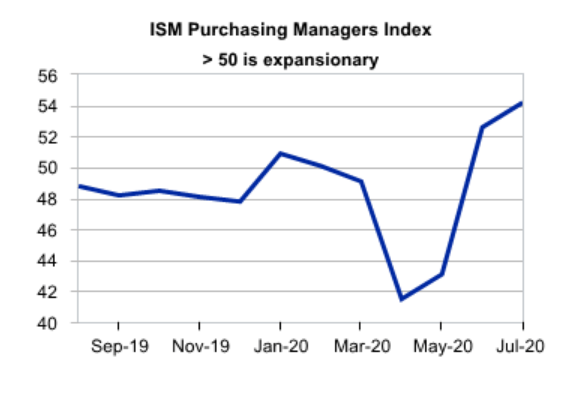 That's clearly a better answer, in the sense that it's the one we will like more.

With regard to the US markets it tends to be the ISM version that gains more weight. It also tends to be more weighted, itself, toward larger and older companies than the IHS version.

We know that there are some problems with these measures. For example, early in the lockdown they themselves were explaining that the measures were understating the extent of the effects. For in normal times an increase in delivery times is regarded as indicating expansion. People are overwhelmed with work which is why the delivery is going to be later. But in lockdown sometimes people couldn't get deliveries because factories were offline. This is not expansionary despite the measurement assuming it is.

Now, as the economy opens up again we've that same problem in reverse. If we're measuring falling delivery times then our normal measure says that is contractionary. But when the economy has been closed that's not necessarily so.

There is another problem which is that both organisations are applying seasonal adjustments. As they probably should. But then again, what happens in a normal year, month by month, might well not apply in this year. So, perhaps they shouldn't. Extraordinary times make the normal numbers behave oddly perhaps.

We can see - and we've had this information out of China for a couple of months now as they started earlier than we did - that reopening the economy is indeed possible. Technically so that is. Well, that's good.

We can also see from our other numbers - retail sales, incomes and so on - that demand is there at present. So, we don't immediately have a failure of macroeconomic demand. We're thus two thirds of the way there to being able to say we'll have a reasonably swift and full recovery.

We're going to have to see whether that macroeconomic demand survives then end of government support for incomes, that's the last third.

I have long been saying that I think we will have a swift, V shaped, recovery. I'm not seeing anything yet to make me change my mind. And yes, I will do a Keynes and when the facts change, I'll change my view.

The markets are about correctly priced for this relatively swift recovery. So, we're looking for evidence against the contention. Evidence like the above, that it's still likely - OK, possible if you prefer - doesn't give us that macroeconomic trigger to change our view of the markets. It's evidence against the contention that would. Which is the evidence we're not seeing as yet.

So far the macroeconomic pointer is that stock market indices are at about the right level. So far only though.

Follow Tim Worstall and get email alerts
+
Add a comment
Disagree with this article? Submit your own.
To report a factual error in this article, click here.
Your feedback matters to us!