Silver is back in a bull market. Three weeks ago, it finally broke out of a 6-year channel (see chart below). This was the moment I was waiting for. While most gold investors were excited about the renewed gold bull market, I was waiting patiently for silver to confirm. As far as I was concerned, we would not reach an ATH in gold until silver broke out. Sure enough, once silver got out of its channel, gold proceeded to reach an ATH. 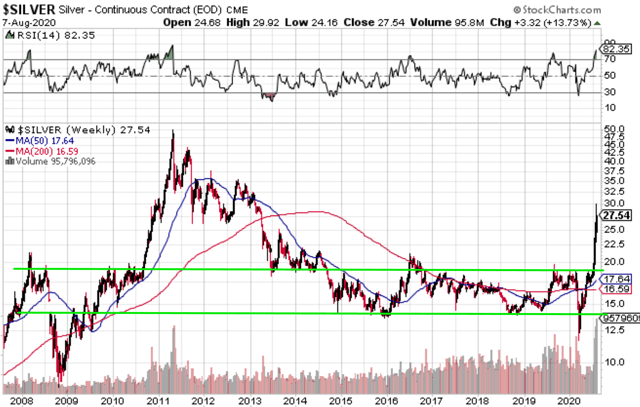 I have been a focused gold/silver investor since 2004. My database includes 800 companies and I analyze all of them. This article is going to include nearly all of the silver miners of consequence. I am going to give you two lists: one for non-producers and one for producers.

For those of you who want to partake in this potential mammoth opportunity, it will be like you are a kid in the candy store. Of course, we cannot be sure that silver is going to finally reach an ATH, but the odds certainly seem to favor it.

Another caveat that I need to mention is that there is huge volatility and risk with silver miners. When you can make a 100% return in a single day, you can also lose a lot of your money fairly quickly. It is quite common for silver stocks to crash, and crash hard. Seeing a 90% paper loss on silver stock is not a strange occurrence. So, know that you are assuming very high risk.

Also, most of these stocks have already broken out during this recent 3-week rally from $18.50 to nearly $30. So, you may be squeamish about buying stocks that you perceive to be pricey. However, the miners are still largely underperforming the metal and could fly from here ($27) to $50 silver.

Before I get to the lists, I want you to know of the potential returns that could occur during this bull market run. I'm going to use two examples. The first will be an optionality play. Discovery Metals (DSVMF) has one of the largest low-grade silver projects in the world in Mexico. For simplicity sake I am going to state their resources at 1 billion oz. (they have more).

Discovery Metals needs about $30 silver to even consider going into production. For this reason, investors have ignored this stock for years because no one believed that we would ever see $30 silver. I bought it at 25 cents a few years ago and waited. Currently, it's at $1.73 ($570 million market cap). Now it's heading to $10 or higher, as long as silver prices trend higher.

Discovery doesn't even need to drill another hole (although they will because that's what they do). They could just sit and wait for silver to reach $100. How much do you think they would be worth? Well, let's use a conservative number of $5 per oz. (which I think is a fair number at $100 silver for their low-grade). At $5 per oz., they would be worth $5 billion using our 1 billion oz. resource estimate.

If Discovery Metals was smart, they would start forming a team to build and operate the mine. They could be the most valuable mining company in the world, with only one mine. Amazing. The sad news for investors is that this never happens. Instead, the board and management team of Discovery will pinch themselves and then sell out shareholders for a small premium to a major. Wait for it.

So, yeah, investing in Discovery could be incredibly lucrative if silver reaches $100. However, the odds favor Discovery selling out long before $100 silver. For this reason, returns could be perhaps 3x instead of a moonshot.

Any similar optionality play with a large amount of silver in the ground faces the same explosive growth in their stock. Another one I like and bought cheap is Golden Tag (OTCQB:GTAGF), which has a lot of leverage to higher silver prices.

There were two others (Silver Bull and Arizona Mining), but both of their management teams sold-out early to South32 (a base metals producer). South32 (OTCPK:SOUHY) was able to obtain more than 400 million ounces of silver they didn't want (at the time of acquisition). They wanted the base metals. Perhaps South32 will realize they are now a precious metals miner and spin-out a subsidiary as a silver miner?

I always cringe when management/boards sell their silver (or gold) in the ground for cheap valuations. The value of South32's Hermosa mine (over 300 million ounces of silver) is worth a fortune as a silver mine. South32 still thinks this is a zinc project. They will likely have to change that categorization soon, because they will be calling Hermosa a silver mine. NorZinc (OTCQB:NORZF) also thinks their mine is a zinc project. I've sent them several emails telling them it's a silver mine, but they don't believe me. Soon they will.

Zinc will NOT go up in value. Silver WILL! So, if a company can produce 3 million ounces of silver at $100 silver, you get free cash flow of around $225 million. At 10x free cash flow, that is a valuation of around $2 billion. Most management teams will tell you that is a fairytale expectation. Or, that they can't plan using those assumptions. Well, guess what? Once silver does reach $100, they will be forced to use those assumptions.

I have always used $100 silver for my future mining stock valuations. Even today, with silver at $27 and trending, the vast majority of investors are still not expecting $100 silver. South32 and NorZinc are likely still stuck thinking they are zinc miners, and none of the majors are even looking at Discovery Metals yet.

Okay, I promised you two examples. For this one, let's do a producer. How about First Majestic Silver (AG)? It is one of the few large pure silver miners. They currently have a tax lien issue with Mexico that has been holding their share price back, but that shouldn't hurt them at $100 silver.

First Majestic is a 25 million oz. silver producer. At $100 silver, I will estimate their free cash flow at around $1.5 billion. If you give them a 15x multiple, they should be worth around $20 billion. Currently, they are valued at $2.7 billion. Is that crazy talk? Perhaps, but I don't think $15 or $20 billion is an insane expectation.

So, if we do indeed see a silver bull market that reaches $100, the upside potential is stunning for both producers and non-producers. The silver stocks will be flying, with many up 100% in days or weeks. This is why I have always been intrigued with silver and silver stocks. No other investment sector has this kind of explosive leverage (that I am aware of).

Eric Sprott is a billionaire and one of the most successful gold/silver mining investors. Recently, he has been buying shares in a lot of silver miners. One way to play this potential silver bull market is just to buy what he owns. Here is his list (let us know in the comments if my list is wrong or what I am missing).

Sprott only has 2 producers on his list and most are exploration stocks. Why? Because he likes to focus on stocks with very high-upside potential, which most producers do not provide. In addition to his list, I like these non-producers:

Even if you don't understand how to pick gold/silver stocks, you can use a trading strategy that should work well during a bull market. Here are the steps:

A few notes on this strategy. Own 20 to 30 silver stocks. Make sure you have good exposure so that you don't miss a big winner. Sprott owns about 25, although only 2 producers. I prefer to own more producers, but I think 25 is a good total.

Another way to take profits is at levels. For instance, each time silver rises $10 or $20, take a look at your portfolio. Losers will get stopped out, but the winners will run. As the winners run, you need to continually take profits on the ride up. Always keep at least 25% of your original cost-basis in case silver goes to the moon (using your 25% trailing stop). Perhaps at some crazy price, say $300 silver, then you can get all the way out.