Part I: Devil Take the Hindmost

In part one of this series, I explored the overvaluation of this market, the narrow leadership accounting for all of its rise in 2020, and the continued speculative activity we have seen among market participants. I compared it to other periods of speculation and provided investors with context from which to view this current rally. In part two, I will explore the real economy, debt, and why one asset stands to benefit above all others.

The Pain is Just Beginning in the Real Economy

While Wall Street delights in tech earnings, the real economy continues to falter. The US and Europe posted some of the worst GDP prints in history, small business owners are relying on financial support to keep themselves afloat, evictions are mounting, and Washington continues to fail to devise a rescue package for Main Street. Though we are assured one is on the way. Even if we do get one by the time this article goes live, the only thing we seem to be truly assured of is Washington's continued incompetence in a time of crisis, as partisanship seems to be winning over clear thinking and a need to respond to a growing economic crisis. 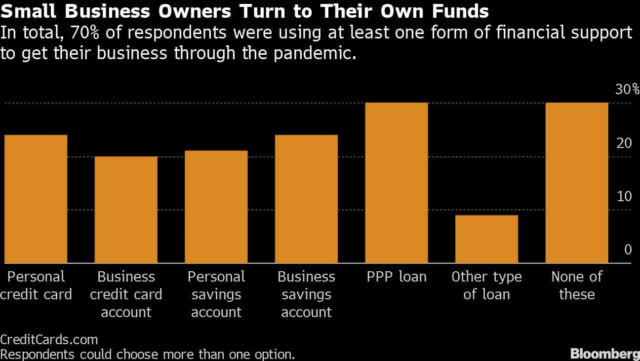 Unemployment has skyrocketed and the U.S. economy just notched up its worst quarter on record, with pandemic-related shutdowns helping drive an annualized gross domestic product contraction of 32.9% in the three-month period through June. And with infections still spreading rapidly in many states, the virus's damaging impact on output looks set to continue." 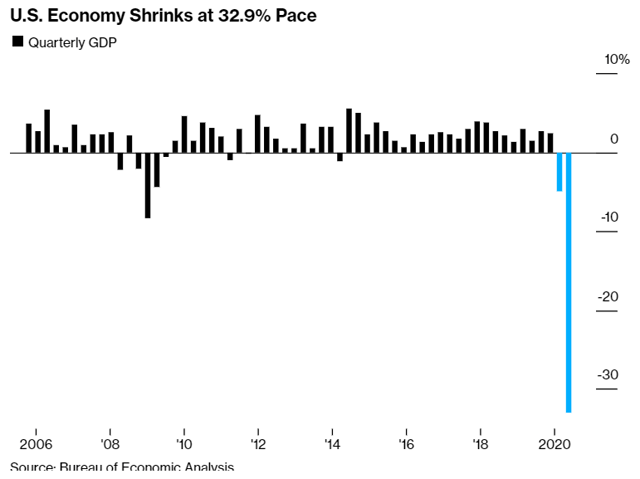 The Eurozone also saw a steep contraction in GDP.

Stringent lockdowns to prevent the spread of Covid-19 weighed heavily on Europe's economy in the second quarter, causing a record contraction more severe than experienced by the U.S., but analysts said the continent's success so far in avoiding a resurgence of the disease coupled with aggressive government stimulus should help support a nascent recovery.

The eurozone's gross domestic product fell 40.3% on an annual basis, far exceeding the 32.9% contraction in the U.S. economy over the same period"

The Eurozone is a particularly interesting area to assess, because there were a complex set of circumstances that were putting downward pressure on inflation and economic growth before the onset of COVID-19. While policy makers have responded, the real risk for the Eurozone is not doing enough to combat the crisis. A 2016 paper entitled "The Rise of Unemployment in the Eurozone: The Worst of the Crisis is Not Over" by Paolo Guerrieri Professor of Economics, University of Rome Sapienza; Professor, College of Europe, Bruges, laid out the unemployment crisis in Europe after the 2008 financial crisis.

"...it is very likely that the eurozone will face a prolonged slump of the kind that Japan has experienced over many years and will not return to significant economic growth for at least the next decade. In particular, the economic and social situation in Southern Europe is bound to remain grim for several years. As things stand, all Southern European countries are facing the prospect of a true lost decade."

As the economic malaise continues, so does the risk of fringe political movements advocating the end to the Eurozone and a reclaiming of national sovereignty. Dr. Guerrieri continues:

Already, anti-European movements have gathered an increased following as voters associate structural reforms with rising unemployment and social stress. These forces have even had electoral success, as is the case with Beppe Grillo's Five-Star Movement (M5S) in Italy.

The risks of non-democratic movements, is a key risk that must be guarded against. Currently, ECB officials seem to be responding to the crisis advancing TLTRO, QE, and other measures meant to combat the negative effects brought on by COVID-19.

Though, I do believe more should, and likely, will be done to combat the continued pressure on Eurozone GDP, policy makers seem to be ignoring the very real risk that this crisis and the response to it, threatens the very existence of the Eurozone.

Stephanie Kelly, Senior Political Economist, and Paul Diggle, Senior Economist, of Edinburgh based Aberdeen Standard, wrote an interesting piece on the potential future of the Eurozone. The piece provides several ways this could play out, where a breakup of the Eurozone could be a very real outcome.

so far at least, the current crisis hasn't taken the form of a sovereign debt crisis, involving a dramatic increase in borrowing costs, a potential loss of market access, and a forced redenomination to regain the ability to issue debt... But none of that is to say that a break-up couldn't be one way in which the current shock ultimately plays out. Continued foot-dragging on a mutualised fiscal response, a hamstrung ECB that fails to increase its asset purchases for fear of future legal action from monetary policy hawks, an Outright Monetary Transactions (OMT) programme over-burdened with conditionality that struggling member states refused to accept, a premature move towards fiscal consolidation, and growing political animosities borne of an inadequate policy response and an asymmetric recovery, could all lead to increased break-up risk even once the initial shock has subsided.

While the risk of breakup in the Eurozone is contained for the time being, as indicated by the "quanto spread" (the difference between credit default swap contracts on Eurozone government debt denominated in euros and equivalent Credit Default Swaps denominated in dollars), it remains a serious risk as we move down the road, and enter the second phase of this crisis, with a depressed economic environment continuing for much longer than most think is possible. 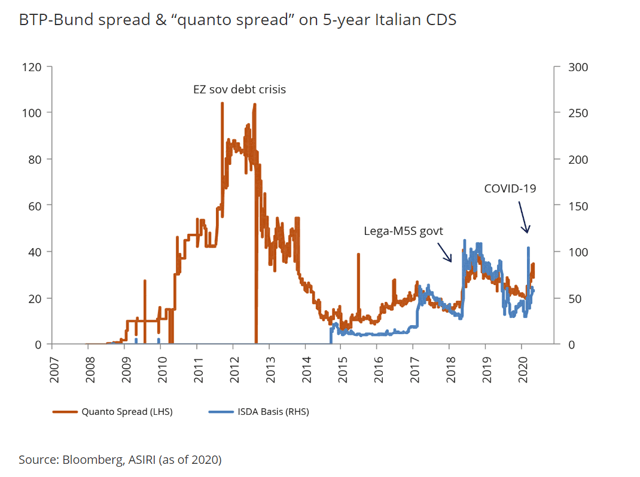 All of this is bullish for the US Treasury bond, a port in the increasingly worsening storm.

The Math is Clear: Lower Treasury Yields Ahead 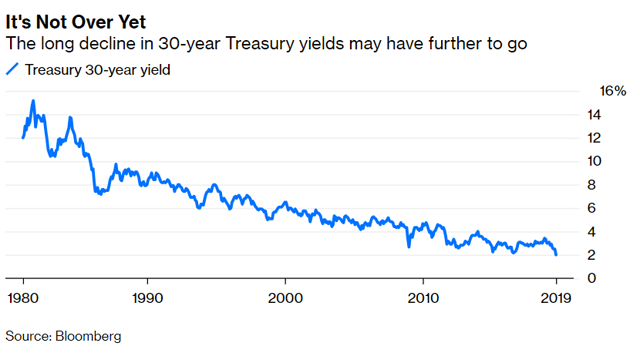 The update to earnings data, and economic data coming in from around the world, has only served to solidify my long-term view, that Treasury rates will go much lower from here. Everything from the risks in the Eurozone, to continued political risk with China, are bullish for long-term Treasury securities.

Long-term bond yields trade based on the rate of inflation. Given the output gap that will persist for some time, and the other dynamics at play that will naturally push GDP down, long-term bond rates have only one way to really go; lower.

The Fisher equation of exchange tells us that GDP=M*V, (where M=the money supply, and V= velocity) in a world where V is falling at rate (r) even as M rises at rate (q), where (r)>(q), GDP will move lower.

Add in the high levels of debt and deficits in the US, and you bring that GDP figure even lower for longer. Despite the assertions by many that deficits do not matter, there has been a number of research studies on the negative impact of deficits and debt overhangs on GDP growth.

In The Real Effects of Debt, authors Stephen G. Cecchetti, M.S. Mohanty, and Fabrizio Zampolli conclude: "Our examination of debt and economic activity in industrial countries leads us to conclude that there is a clear linkage: high debt is bad for growth. When public debt is in a range of 85% of GDP, further increases in debt may begin to have a significant impact on growth: specifically, a further 10 percentage point increase reduces trend growth by more than one tenth of 1 percentage point." (p.21)

Cristina Checherita and Philipp Rother's piece, The Impact of High and Growing Government Debt on Economic Growth, An Empirical Investigation for The Euro Area, states: "on average for the 12-euro area countries, government debt-to-GDP ratios above such threshold would have a negative effect on economic growth. Confidence intervals for the debt turning point suggest that the negative growth effect of high debt may start already from levels of around 70-80% of GDP, which calls for even more prudent indebtedness policies. We also find evidence that the annual change of the public debt ratio and the budget deficit to-GDP ratio are negatively and linearly associated with per-capita GDP growth." (p.6)

They further conclude: "a higher public debt-to-GDP ratio is associated, on average, with lower long-term growth rates at debt levels above the range of 90-100% of GDP. The long-term perspective is reinforced by the evidence of a similar impact of the public debt on the potential/trend GDP growth rate."(p.22)

Andreas Bergh and Magnus Henrekson's paper Government Size and Growth: A Survey and Interpretation of the Evidence, found that as government size increases, GDP growth declines.

Reinhart and Rogoff, along with Vincent R. Reinhart, authored Debt Overhangs: Past and Present - Post 1800 Episodes Characterized by Public Debt to GDP Levels Exceeding 90% for at Least Five Years, in which they state: "Consistent with Reinhart and Rogoff (2010) and other more recent research, we find that public debt overhang episodes are associated with growth over one percent lower than during other periods. Perhaps the most striking new finding here is the duration of the average debt overhang episode. Among the 26 episodes we identify, 20 lasted more than a decade. Five of the six shorter episodes were immediately after World Wars I and II. Across all 26 cases, the average duration in years is about 23 years. The long duration belies the view that the correlation is caused mainly by debt buildups during business cycle recessions. The long duration also implies that cumulative shortfall in output from debt overhang is potentially massive." (p. 1)

Carmen M. Reinhart and Kenneth S. Rogoff, concluded in Growth in a Time of Debt that "across both advanced countries and emerging markets, high debt/GDP levels (90 percent and above) are associated with notably lower growth outcomes."(p.577)

As the developed world goes deeper and deeper into debt, it is clear the effects of this crisis will linger long after the crisis passes. 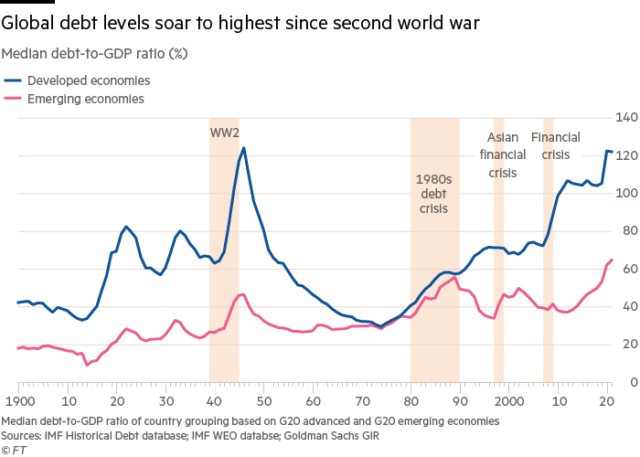 To me, this says that long-term bond yields are going to crash, past zero to negative territory, as the US enters a deflationary depression, not unlike the 1930's which will not bode well for stocks.

In the world we foresee of slow economic growth and massive debt overhang, every country wants to export more to promote its local economy and none are zealous for imports. So global supply will continue to exceed worldwide demand, resulting in even a bigger savings glut and making chronic deflation a serious probability."

The conclusion of all of this for investors is to consider the risks they are taking buying overpriced equities in a world where deflationary forces are gaining steam, and pressure on GDP growth will likely persist for some time. Lower yields on long-term government bonds seem the logical conclusion, as this 40 year bull market continues and the curve flattens towards 0%.

Disclosure: I am/we are long US TREASURY BONDS. I wrote this article myself, and it expresses my own opinions. I am not receiving compensation for it (other than from Seeking Alpha). I have no business relationship with any company whose stock is mentioned in this article.